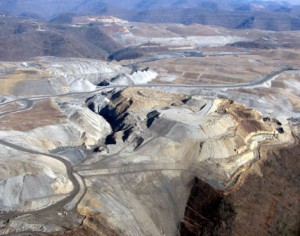 Appalachia has some of the most impoverished communites in the United States. The entire region is economically depressed as compared to the national average. But coal communities in Appalachia are even worse off than the rest of the region, a fact that runs counter to the idea that coal jobs support local communities. A new study out of the Institute for Health Policy Research at West Virginia University and published in Public Health Reports looked at this discrepency and found that, even using conservative assumptions, the economic costs of coal mining in Appalachian communities far outweighed the benefits from having a coal mine in the community.

The study reached this conclusion by gathering publicly available data from various government databases and then calculating how much economic benefit coal mines produced in Appalachian communities vs. how much the coal mines cost in early deaths. As a result, the study had to prove that there were unusual deaths in coal communities, and they did so using statistical analyses designed to account for the effects of “smokin, race, poveryt, physician supply, education, and other variables.” And even after adjusting for all these variables and removing their effects on early mortality, the study found that there was nearly 3000 excess deaths in coal-heavy Appalachian counties as compared to the rest of the US.

Multiply the number of excess deaths caused by “chronic forms of heart, respiratory, and kidney disease, as well as lung cancer” by the official value of statistical life (VSL, the amount of money that each life is worth for cost-benefit analyses performed by the federal government) and you have a conservative estimate of the costs of coal mining. Similarly, use an old 1997 estimate of the economic benefits to Appalachian communites, adjust for yearly inflation, unemployment since the start of the study period, add tax income and subtract government subsidies, and you get a reasonable estimate for the value of coal in Appalachia.

The result: just over $8 billion in estimated benefits to Appalachian communities, but at cost of $51 billion in lost economic power due just to the early deaths of people living in coal communities.

Put another way, since 1997, Appalachian coal communities have lost $43 billion dollars that they would have kept in their communities had they thrown the coal companies out.

The paper is careful to point out that they can’t definitively prove that air and water pollution from coal is responsible for the excess deaths detected in the coal communities. But the study’s conclusions and discussion make it abundantly clear that the preponderance of evidence is that coal pollution is directly responsible:

Elevated adjusted mortality [due to chronic diseases] occurred in both males and females, suggesting that the effects were not due to occupational exposure, as almost all coal miners are men. These illnesses are consistent with a hypothesis of exposure to water and air pollution from mining activities.
…
[G]iven the literature on the impacts of social disparities and the previously documented problems of coal-dependent economies, such a causal link [between excess mortality and coal mining] seems likely.
…
We concluded that [the role of environmental pollutants in excessl mortality] was possible given the results of the regression models and previously cited literature on the environmental consequences of coal mining.

And even with all that, the study points out that the cost estimate may in fact be too low. The cost estimates were just the costs of excess mortality and didn’t include health care costs, poverty reduction costs (such as food stamps), lowered property values due to nearby coal mining, or the intrinsic value of the natural resources (such as streams and mountains that could attract tourism or site renewable energy) that are destroyed in modern Appalachian coal mining (ie mountaintop removal).

The study’s authors specifically limited their scope to Appalachia. But if the results of their study holds nationally, then this could be yet another nail in coal’s coffin, right along side peak coal.

Thanks to lead study author Dr. Michael Hendryx, PhD, for a copy of this paper.

When scientists discovered that chlorofluorocarbons (CFC) were responsible for destroying the ozone layer that protects the Earth from dangerous ultraviolet solar radiation, the international community created a treaty known as the Montreal Protocol that layed out how to replace CFCs with other, less dangerous chemicals. Since then, however, climate disruption has become a serious concern. As a result, the powerful greenhouse gases known as hydrofluorocarbons (HFCs) that were created specifically to replace CFCs have become a serious problem as well. A new study in the Proceedings of the National Academy of Sciences and originally reported by Solve Climate has found that, unless there is international committement to phasing out HFCs in favor of other refrigerants, the world will generate enough HFCs by 2050 to equal 6-13 years of global carbon dioxide (CO2) emissions.

According to the paper, the emissions scenarios used by the IPCC for the most recent Assessment Report underestimated the amount of HFCs being emitted into the atmosphere by approximately 20%. The study’s authors attribute this increase mostly to the wider deployment of refrigeration in developing countries. Because the bulk of the growth in HFC consumption is in developing nations instead of the developing world, national legislation limiting national emissions of HFCs like Waxman-Markey ACES or the Lieberman-Warner Climate Security Act frmo a couple of years ago have almost no effect on global HFC emissions. However, the study proposes several options for HFC phaseouts under the Montreal Protocol that could dramatically reduce HFC emissions. If the business-as-usual (BAU) emits so many HFCs that it’s equal to 6-13 years of CO2 emissions, then the best-case Montreal Protocol solution proposed in the study could reduce that to 2-3 years of CO2 emissions. That’s a huge potential savings in greenhouse gases that would reduce the thermal forcing on the Earth’s global climate.

As with the previousl study, however, not all the climate effects of HFCs were included. Only the direct effects on climate via radiative forcing (the amount of additional energy absorbed by the Earth due to the presence of HFCs) were calculated. But there are a number of indirect effects as well, such as energy consumed or saved during the use of HFC refrigerants and required to produce the HFCs in the first place. This means that the estimate of the climate effects of HFC consumption is conservative and thus likely to increase with a fuller accounting of indirect effects.

In other words, if the world doesn’t change refrigerants globally, we may find ourselves in a neverending cycle of “the Earth gets hotter, we run the AC more, which needs more energy and refrigerants, which makes the earth hotter….”

Oil shale in the Green River Basin of Colorado, Utah, and Wyoming holds what could be a trillion barrels of oil. It’s locked in the rocks in a waxy form called kerogen that needs to be mined or heated in place to extract it efficiently. One of the technologies being tested to heat the kerogen enough to pump it with standard oil pumps is a massive microwave system that heats up the rock. The developer of this technology, Raytheon, thinks that they can adapt it to efficiently sequester CO2 in a solid form underground.

Most current plans for carbon sequestration rely on pumping liquid CO2 into deep saline aquifers or depleted natural gas fields. The aquifer option assumes that an aquifer will absorb the CO2, become more acidic, and react with the rock, turning the CO2 from a liquid into a carbonate mineral. The natural gas field option assumes that the CO2 will stay liquid or may even turn into a gas, but that the geology that held the natural gas underground will also hold the CO2 indefinitely. But both assume that the geology will be able to contain the injected CO2 indefinitely, an assumption that has not been tested and remains a huge risk to any carbon sequestration scheme.

However, the Raytheon solution reported by GreenInc supposedly injects the CO2 into the ground encased in a gel that solidifies when exposed to microwaves (or hot rock – the GreenInc article isn’t clear on this detail), theoretically all but eliminating the risk that the sequestered CO2 will leak back out of the ground.

If it works, then the Raytheon solution is probably lower risk than liquid CO2 injection into aquifers or old natural gas fields. But the massive microwaves are going to take a huge amount of elecricity, and in the western US that means scarce water too.

I can’t help but wonder if the CO2 emissions from generating the electricity needed for for sequestration outweighs the amount of CO2 actually sequestered….