Can a terrible, horrible, no-good, very bad final episode totally ruin the enjoyment of 50 prior episodes? It did for me. If you want to find out for yourself, watch Soul Eater. Spoilers ahead. 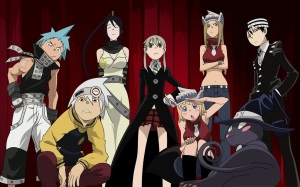 Soul Eater – the meisters and weapons (plus the annoying transforming cat)

A while back I asked for recommendations about what anime to watch, since I was getting back into watching anime again. A friend suggested Soul Eater, and so I gave it a shot. And for most of the 51 episodes, I enjoyed myself thoroughly. But the last episode pretty much ruined it the entire rest of the anime for me.

Let’s start with the good

Soul Eater is set on an alternate Earth where witches and monsters exist, where the moon is a creepy, leering face that literally laughs at your misery all night long, and where Lord Death is a main character. It takes place mostly at a school for teenaged “meisters,” people who fight to protect humans from demons that kill them and devour their souls, and from witches that have the power to control demons and generally enjoy causing chaos. The school also trains weapons, humans that transform into weapons like pistols, swords, and scythes that are wielded by the meisters. 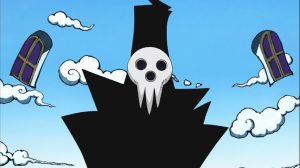 Soul Eater follows the growth of three sets of meisters and weapons – Maka Albarn with Soul Evans (scythe), Black Star with Tsubaki Nakatsukasa (ninja weapons), and Death the Kid with Liz and Patty Thompson (pistols). Maka is the daughter of a death scythe (her father, once wielded by Death himself) and one of the most powerful meisters ever (her mother). Soul is a musician who uses his musical ability to increase his and Maka’s harmonization to the point of being able to defeat nearly anything. Black Star is the last of a clan of infamous ninjas who has the ability to not only channel his soul through his partner Tsubaki, but also fight unarmed without her. Death the Kid is Death’s son and he has a powerful enough soul that he can fight using two weapons, Liz and Patty (the “Thompson guns”).

Over the course of the series, Maka and Soul have a falling out and Soul tries to pair with Black Star. Soul get infected with witch-generated “black blood” that is like a poison that has the potential to turn him into a demon if he can’t control it. Tsubaki initially refuses to transform herself into the full variety of ninja weapons because she’s worried that Black Star can’t handle the more powerful weapons, and eventually she confronts her own corrupted brother and devours his soul. Black Star’s personal history is explored and he learns just how horrible his clan was and why they were ultimately destroyed. Death the Kid is obsessed with perfect symmetry, which is part of why he has two guns (and can’t function with just one) Liz and Patty are two sisters who grew up on the streets, either one of which can actually wield the other as a weapon, with the older Liz being more cynical and motherly and Patty being more innocent and childlike. 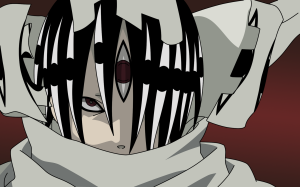 Soul Eater – Asura, aka the Kishin

There are several recurring villains as well, with the Big Bad being Asura, a fragment of Death’s soul containing all his fear. Asura had been imprisoned by Death himself beneath the school for the meisters and weapons, but ultimately is broken free by the actions of several witches and a couple of demons.

The most interesting villain is only sometimes a villain. Crona is the son of a witch who is horribly abused, trained as a meister by his mother, and even has his blood replaced by a weapon so that his blood can form needles, blades, clubs, and more. Maka befriends Crona and tries to make him an ally against Asura, with varying success depending on the episode. 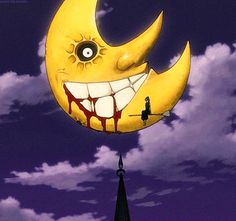 Interesting characters. Fun martial arts/gunplay combat scenes. An interesting setting. All of these things made for a very enjoyable anime.

Now for the bad

Soul Eater is 51 episodes long. Short anime often feel like they’re rushed, but long anime can feel like they’re dragging, and Soul Eater has some of that. But given the overall excellence of the anime, there was probably one two or three points where I hoped that they’d just get on with it already.

The setting, while very interesting, was a mix of hand-drawn and computer generated animation, and the mix didn’t always work well. Remember how the ballroom dance scene in Disney’s Beauty and the Beast seemed when it first came out (assuming you’re old enough to remember that, of course)? Amazing technical wizardry, but the hand-drawn characters seemed out of place on the ultra-detailed backgrounds? That’s how a lot of Soul Eater seemed to me, and it was occasionally distracting. 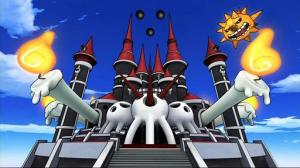 Soul Eater – the school is mostly CG, yet the town around it is mostly hand-drawn

But the big problem became apparent at about episode 46. At this point we’re well into the final plot line and building up to the last major battles between the three meister/weapon pairs. We’d learned by this point that Maka is very brave, sometimes stupidly so, and that Asura was essentially the embodiment of fear. And that’s when I started to get a really bad feeling about where the series was going to end. I concluded that the meisters were going to have to overcome their own fears to defeat Asura, and that Maka was being set up to defeat Asura. The idea is that bravery can overcome fear.

And that’s exactly what happened. But what’s worse, everyone else was defeated by Asura except Maka, and yet Maka’s bravery ultimately saves all her fellow meisters and weapons and she defeats Asura with a bunch to the face.

I’m fine with wimpy kids defeating superpowerful adults and monsters with some superpower that they weren’t aware of. That’s not a big deal for me – it’s part of anime. But the last episode felt so contrived – a kid, without her weapon and with only the strength of her will, defeats an enemy that was so powerful that it couldn’t be killed, only contained, by Death himself. And the heavy-handed moralizing struck me as a betrayal of the complexities of the series up to this point. It was almost as if I stopped watching a teen/adult anime and was suddenly watching a show for seven year olds.

If it weren’t for the last episode, I’d recommend Soul Eater to almost anyone. As it stands, though, if you can stomach one truly awful episode at the very end of the series, then you’ll enjoy a great anime. If not, then don’t even bother starting, and find something else to watch instead.