Lily Dale: A spiritualist by any other name… 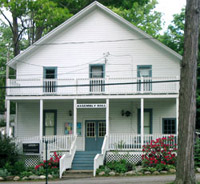 Part three in a five-part series

“(The Church of the Living Spirit is) nothing but bunch of pagan heathens who serve Satan.” — George Mayer, Lily Dale Spiritualist Church attendee

I decided not to bring John this time. Since our first trips to Lily Dale I’ve contacted dead relatives, survived entering a spiritualist’s home, and learned to suppress my aura. Even with the fear of exposure subdued, it seemed extreme to bring a sacrificial target. And blending into the ‘pagan heathen’ church would reap more answers than agitating the mass.

My selection for a replacement traded class for subtlety. Joseph Anderson stepped from the car wearing rip-off Adidas gym pants, a waffle-knit sweater, and a pair of cheap lounge loafers with no socks to speak of. It’s the best I could have hoped for from a guy with only two priorities: working out and blacking out. Finding a friend willing to waltz into a Satanic church proved difficult.

“Hey, this sweater is much better than a polo, or whatever you’re wearing,” said Joe. “I’m comfortable and I’m gonna stay that way. Don’t expect me to sing or dance, or whatever. I’m just your ride.”

Rain slicked my hair as I took in the scenery. The Church of the Living Spirit looked like a southern plantation. A wide wrapping porch encompassed the first floor with an identical, but shorter, porch encasing the second. A wooden stopper held open the doubled entrance doors for sprinting attendees. And, fitting to every spiritual institute at Lily Dale, an all-too-white paint job covered every inch of the building.

A crowd full of friendly faces scurried towards the church’s door. Nuclear families huddled under shared umbrellas, aging couples strolled in bliss, and the scream of a baby rang among the pitter patter of raindrops. Besides the child, most of the crowd offered polite hellos and welcoming smiles as we passed by.

“Are you sure we have the right place?” asked Joe.

I checked my map four and twenty times. Joe and I found the right place: The Church of the Living Spirit.

It must be family morning in the hell hole.

I couldn’t expect anything else but hell. When you’re lied to your entire life, believing a small offshoot of Lily Dale residents sacrifice chickens isn’t a stretch. Even with the stereotypes aside, when a seasoned member of a strange community tells you this gathering worships Satan…you expect a little more than family fun day.

Disenchanted but curious, we waded through the crowd towards the church—most members still standing in the rain to catch up with each other. A well-dressed usher offered a welcome, presented us with a hymn book, and seated us as esteemed guests.

Flowers, flowers, everywhere and not a…wait a minute.

I saw this before. Flowers consumed the main alter, community paintings hung on the walls, the stained-glass windows carried psychedelic swirls, and the church even used the same black-metal chairs. The Church of the Living Spirit looked, and felt, the exact same as the Lily Dale Spiritualist Church.

We sat in a crowd three times the size of the Lily Dale Spiritualist Church. And even though the LDSC boasted diversity, the attendees at this pagan-heathen hoopla covered more of a range. A biker in full leather sat in contentment, two or three homeless men and women clung to their chairs with dull smiles, and children, from the smallest baby to the most angst-ridden teen, waited in patience for the service to start. There wasn’t a brightly plumed flock of women controlling the mass, just a regular crew of normal looking people in need of spiritual fulfillment.

There’s no Satan in this church.

Maybe I haven’t been trained to see him properly.

Trained or not, why would George lie to me? What has him so addled that he’d badmouth another church of the same belief as his?

“Welcome spirits, new and old,” said Reverend Judith Rochester. “And welcome newcomers and members to the Church of the Living Spirit.”

Both churches, in service and guidelines, claim to be part of the most open and accepting religion around.

I asked the leaders of the Lily Dale Spiritualist church why two churches existed for one community. Lily Dale’s off-season and on-season populations tally at roughly 300 and 600, respectively—not counting the thousands of visitors. Even with the on-season’s swell, two churches might not be necessary…especially with the six-figure revenues the little community generates.

The difference being certification. The Church of the Living Spirit lacks the blessing, and paperwork validation, of the National Spiritualist Association of Churches, as of 2008. The NSAC is a modern Spiritualist powerhouse that regulates over 5,000 professionals of the spirit world, and 200-plus churches. Since 1893 the NSAC has been fostering the growth of modern Spiritualism, and the Lily Dale Spiritualist Church wears their certification like a kindergartener wears a gold star.

So, why doesn’t the Church of the Living Spirit just get their plaque and be done with it?

“Well,” said George. “They’re nothing but a bunch of pagan-”

Having heard that argument, I addressed George’s wife instead. Terry Mayer, a distracted gray beauty of purple suit and perpetual smile, led the healing session when I attended the Lily Dale Spiritualist Church.

“Our beliefs differ,” said Terry. “(The Church of the Living Spirit) believes in different things—like reincarnation.”

With one of the area’s first NSAC offices right in Lily Dale, the structures the association sets for Modern Spiritualist churches are tight. The NSAC expects Spiritualist churches to keep their all-accepting belief close to Christian traditions. They turn gospel favorites like “Amazing Grace” into prayers for healing. The single divine being they worship is called the “Infinite Intelligence,” or God depending on the practitioner. Even the stand-up-sit-down nature of Catholic churches, and the over-physical healing sessions of Evangelical churches, is felt in NSAC services.

But, the Church of the Living Spirit just had to borrow a Buddhist prayer, some reincarnation ideas, and some cosmic balance philosophy. They just had to go and add a few more beliefs to the cauldron of originality and acceptance.

“The Spirit is progressive. It grows,” said Sharon. “To say we start over (reincarnate) contradicts the idea of a spirit realm.”

“We welcome (The Church of the Living Spirit) in our summer activities,” said Sharon. “They’re still a part of this community.”

But, as George reminded me, they’re still heathens. Heathens who attract part of the hundreds of thousands of dollars Lily Dale generates to sustain its community members, but heathens nonetheless.

Even “the world’s most accepting religion,” as Terry said, can make room for a cash-drawing bastardization of their ghost-centered beliefs.

“Think I should go get healed,” said Joe.

And Joe took his own dare when the healing portion of the service came about. A large Texas-looking fellow sat Joe down, placed his hands all over his body, and said a short prayer. Once again, no glowing occurred or divine chorus of healing played, but the healer accomplished a greater feat. The four minutes of spiritual healing turned the stiff and uncomfortable non-believer into a considerably relaxed non-believer.

“Not sure if anything worked, but I feel relaxed,” said Joe. “They put so much belief in (spirit healing) working that you have to believe it yourself, I guess.”

Despite his new-found relaxation, Joe remained attentive. Past the healing session, the service mirrored the Lily Dale Spiritualist Church. Private healing led to a public healing session. A guest speaker, Jim Barnum, preached a message of hope—not too different than Gretchen Clark’s message of patience and persistence.

Gretchen attended the Church of the Living Spirit that day. She sat with the patience she taught, wearing a warm smile and a violet aura of spiritual enlightenment—if my auric sight training served me correctly. No other attendee seemed to notice or care. Gretchen did not receive a single glance or hateful gasp for attending the other church. She just sat. Cheerful and attentive.

Jim Barnum called on Gretchen during the public reading.

Gretchen stiffened and nodded in anticipation.

“Wow. Well, I’m going to say it like this,” said Jim. “You know his message and he wants you to carry it out for him. Understand?”

Gretchen replied with a soft series of happy sobs and confirming nods. The audience turned and reflected her joy with smiles for miles. Nearby congregation members placed assuring hands on Gretchen’s shoulders.

“I’ll leave that with you and say God Bless,” said Jim.

God Bless. You could feel God…the Infinite Intelligence…or whatever you want to call it…in their assembly.

The following readings fell flat, but the audience kept good humor. Though some of the workshops Reverend Rochester announced—like “An Evening with the Elementals”—sounded too high fantasy for my taste, the spirit remained strong.

“(Spiritualism) is a religion of being a good person,” said Joe. “It’s kinda weird that they talk to dead people, and that they borrow a lot from other religions, but everything else is right. I’d come here if I were raised different.”

What of a religion or a church? Does one need certification from a nationally recognized organization to spread peace, hope, and love? Does a strict doctrine, tested against centuries of manipulation and warfare, have to back your messages for any inspiration to be credible?

Joe and I entered the church as honored guests and left as friends. My hulkish associate found peace from the stresses of his party lifestyle. I found a renewed hope in seeing a widely misunderstood group rise and prosper. We didn’t believe in talking to the dead, but we still managed to find a place in their service—all thanks to a warm congregation, a simple yet potent message, and an open mind.

The Church of the Living Spirit lived up to its name by fulfilling a pair of skeptics with ease. They satisfied their roll as a place of worship and enlightenment—as churches strive to be.

Acts prove a service’s faith, and not certification.

Just as anything’s worth is proven by experience, and not assumption.

Jared VanDyke is a freelance writer and graduate of St. Bonaventure University’s Journalism and Mass Communication program. He is attending Goddard College for an MFA in Creative Writing, in June of 2010, to strengthen his preferred writing style of New Journalism.