Robert E, Spiller’s classic of literary history, The Cycle of American Literature, still holds insights for the serious reader even though he occasionally creaks with quaintness… 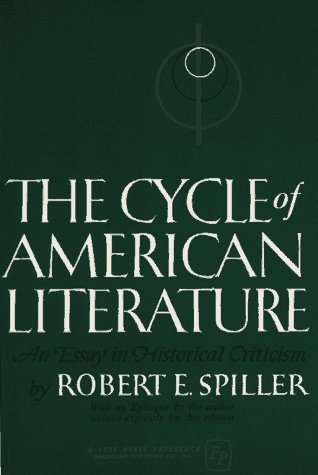 Pulled this wonderful old critical monograph on the history of American literature off the shelf a bit ago and have just completed a re-read, my first of this text in, oh, I don’t know, about 40 years, I’d say.  First published in 1955, The Cycle of American Literature is Spiller’s personal, sometimes idiosyncratic (as all good scholarly writing should be) critical survey of the emergence and evolution of American literature as we know it.

Readers old enough to remember the training one received in literature prior to the scholarly culture revolutions of the last several decades which have seen cultural shifts such as the removal of one time bastions of literary study from the curriculum as their places are taken by more “relevant and inclusive” author selections will read this lovely chestnut of “old school” critical thinking with a satisfying “hmm, yes, that’s how we were taught to think about literature.” Those trained since the revolution that made criticism more important than the literature it is supposed to be critiquing may find it shocking at first to have a scholar/critic actually write about writers and their work as if those writers and their work actually matter and are not just products of deep psycho-social structures that reduce the literary artist to a cipher, a tool, an outlet for the historical and cultural forces of his/her time will scratch their heads and say, perhaps, “slightly benighted, but certainly some interesting stuff here.”

As Mr. Vonnegut observed, “So it goes.“

Putting aside Spiller’s relevance in the current scholarly culture, The Cycle of American Literature is interesting for a number of reasons. First, the author has definite views about a number of authors, at least one of which will feel prickly to any thoughtful reader. Here he gets on my wick (as the Brits say, or said) with this casual passive aggressive demeaning of one of my literary heroes, Stephen Crane:

The work of Stephen Crane (1871-1900) is also experimental, but, unlike [Frank] Norris and perhaps because his scope was deliberately more restricted, Crane succeeded in producing a few short tales and novels which have the perfection of classics.

A knowledgeable reader who has waded through Norris’s The Octopus knows damned well that while he aims high and he is often powerful, he can’t write like Crane. But Spiller subscribes, one suspects, to Dame Helen Gardner’s theory of “major and minor” writers. Dame Helen called John Donne a minor poet (because he never wrote plays or epics) and posits in her theory that, despite any evidence to the contrary, size matters. Norris wrote six big novels, none of which is not noticeably flawed, in his 31 years; Crane in his 29 years settled for a pair of short novels and a handful of short stories that are all perfect or damned near so.  Go big or go home?  Astute readers easily call that one.

On the other hand, despite himself, Spiller makes every attempt to forgive Thomas Wolfe for his magnificent, shambling works:

Wolfe never quite grew up in the ordinary sense because he rejected all that Esther Jack and Maxwell Perkins and the city had to offer him. In short, he fought off his own completed maturity; but his loss was also a gain. By holding onto youth to the end, he realized the unquenchable hunger and thirst of life, and his faith in the power of words to resolve the conflicts of mind and heart made it imperative for him to reveal all of himself – and, with himself, humankind – more fully than has any other modern American novelist.

Wolfe is another hero of mine, but no thoughtful reader has worked his/her way through Wolfe without thinking, “Jeez, guy, listen to an editor once in a while and cut some of this.”

Spiller has other flaws, but those are more easily explained as limitations of his cultural milieu. While he is quite generous in his praise of Emily Dickinson (one has the sense he is violating his own belief that size matters in equating her with Whitman as a powerful voice of American poetry – rightfully so), he is dismissive of Ellen Glasgow, Willa Cather, and Edith Wharton as writers of “small” vision compared to Henry James, Norris, and Theodore Dreiser. (I won’t tackle his treatment of Stein v. Hemingway; there are matters there other than sexism at work, it seems to me.) The sexism in his views is obvious and his critiques of those superb women writers can be easily dismissed.  And evidently writers of color don’t exist, so there’s that issue looming like the elephant in the room.

But I give Dr. Spiller all due credit for this: he has set my head buzzing with his lengthy and thoughtful treatment of Naturalism in American literature. Given the current economic, social and cultural conditions where most Americans (oh, about 99% of them) feel as if they’re in thrall to forces beyond their control, his argument for the need for Naturalist literature that confronts these sorts of issues in an honest if troubling way resonates powerfully with me.

One last observation: Spiller’s treatment of Sinclair Lewis is insightful. While noting justly that Lewis was the first American honored with the Nobel for literature, Spiller points out that better writers were ignored. To his credit, he points out that Lewis knew this too, and that it made him modest – and prone to self-medicate with alcohol I would add. It’s a lovely, thoughtful moment in a work once deeply revered for its critical insights, now all too quaint.