After apple-picking: Autumn with Robert Frost 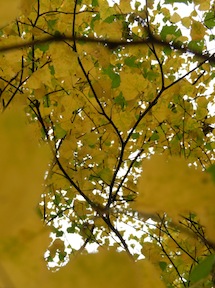 Vermont’s vaunted maples have begun to flush crimson, but the oaks stubbornly cling to their sturdy green. By Robert Frost’s hillside grave, in Bennington’s Old First Churchyard, the birch trees have breathed in autumn and exhaled it as goldenrod.

These calico mountains, having abandoned most of the “Green” of their namesake, could not make a more picturesque Frostian site. He was the poet of rock fences, spring pools, and wood piles, of snowy evenings and roads not taken, of small-town New England life and simpler times. “I am an ordinary man, I guess,” he once told the New York Times Review of Books.

Frost has been on my mind since a Saturday trip last week to an apple orchard in North Chester, Maine. Al LeBrun balanced each Courtland, each McCoun, between his fingertips like a snowglobe, showing off its delicate beauty. A quintessential rite of autumn, apple picking always brings to mind Frost’s famous poem. “After Apple Picking” recounts the post-harvest fatigue of a man who is “overtired of the great harvest I myself desired.” The poem looks ahead toward winter, and sleep—“whatever sleep it is.”

And here Frost has slept since his death in 1963. “I had a lover’s quarrel with the world,” the tomb decrees. 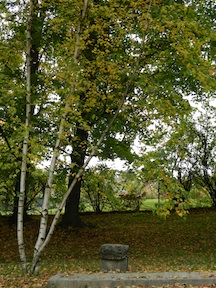 With gold leaves sprinkling on his grave from the birches tree, it’s hard not to think of Frost’s great meditation on mortality, “Nothing Gold Can Stay”:

Nature’s first green is gold
Her hardest hue to hold.
Her early leaf’s a flower;
But only so an hour.
Then leaf subsides to leaf.
So Eden sank to grief,
So dawn goes down to day.
Nothing gold can stay.

The graveside birches themselves come from another of Frost’s works, “Birches,” a poem that cracks and crazes the ice-enameled tree trunks in winter and subdues them into catapults for a boy, a “swinger of birches,” in the summer. The poem contains one of my very favorite images from any line in literature: “He always kept his poise/To the top branches, climbing carefully/With the same pains you use to fill a cup/Up to the brim, and even above the rim” [emphasis added]. The truth of that single observation taught me how to look at the world more closely.

Most people I know have a Frost connection of their own. At the very least, people can make allusions to “The Road Not Taken” and all the difference that choice has made in their own lives. For me, I first came across Frost in “The Pasture,” the first poem I ever had to memorize. I chose it then, in fifth grade, because of its brevity, but I have returned to “The Pasture” many times over the years to appreciate the wonder with which it views the world.

My son was a year younger, in fourth grade, when he first met Frost. He had to pick a poem and paint a picture to go with it. He chose “Stopping by Woods One Snowy Evening.” He brought it home proudly, and I had him read it for me. I framed the piece, and it now hangs in my office. My son, standing with me by Frost’s grave, reminds me about their collaboration.

Frost, I suspect, would have approved. He spent much of his career encouraging young writers even as he had been encouraged, early in his poetic career, by Ezra Pound, Rupert Brooke, and Robert Graves. Ironic that the iconic Yankee poet found such influence during a three-year stay in England—a trip most Frost fans don’t remember.

By the time he returned from that trip, he’d published his first two poetry collections. He would publish eleven all told, winning four Pulitzer Prizes in the process. “He has bequeathed his nation a body of imperishable verse from which Americans will forever gain joy and understanding,” said President Kennedy, who also lauded Frost for linking poetry to power “as the means of saving power from itself.”

Frost had read at JFK’s inauguration—“The Gift Outright”—the capstone to a remarkable career that had made him literally one of the most beloved and respected men in America.

“Remember,” Frost once told a young admirer, “what you think in a poem is never as important as what you imagine.”

The limitless potential embodied in that line inspires me like few other aphorisms—and Frost was full of them. I spotted one, perhaps his most famous, on a friend’s Facebook page just the other day: “In three words I can sum up everything I’ve learned about life: it goes on.”

How true that is, I realize, even as I stand next to Frost’s grave. The leaves that fall on it will be replaced in the spring by new buds that will, in turn, explode to life. The Green Mountains will regain their namesake color. A new generations will follow the footpath down the hill past the white-spired church, through the rows of thin headstones and Revolutionary War heroes, and stand next to the birch tree in the footprints I have just walked with my son. He will read Frost for years after I am gone, and his children beyond him.

I am, to paraphrase Frost, done with woolgathering now—and apple-picking and birch trees and New England cemeteries.

But only for now.