American vs. unAmerican values, according to the Eighth Amendment of the Constitution

The Eighth Amendment protects Americans from “excessive” fines and bail as well as “cruel and unusual punishment.” What that means can change, however. 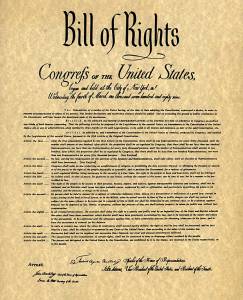 The Bill of Rights

Without the Declaration of Independence and the Constitution of the United States of America, the United States of America would not exist. As such, the values laid out in these two documents are, by definition, American values. And any values held in opposition to the values in these documents are, again by definition, unAmerican.

Excessive bail shall not be required, nor excessive fines imposed, nor cruel and unusual punishments inflicted.

“Excessive” is a term that varies with the conditions of the person facing it. The Supreme Court has interpreted “excessive bail” to be the amount of money required to ensure that the person paying it appears before the court to face the charges against them. In this way, requiring the wealthy to pay more in bail is in line with American values. The Supreme Court has also ruled that the more severe the charges, the higher bail may be set, and in the most serious of cases (usually violence) bail may be denied entirely. As such, denying bail is in accordance with American values.

“Excessive fines” are calculated along a similar sliding scale, per the payer’s ability to pay the fine. The standard of “excessive” was defined by the Supreme Court in Waters-Pierce Oil Co. v. Texas as an amount that did not qualify as a taking of property without due process (which would violate the Fifth and Fourteenth Amendments) – unless the legislature defined a process by which such property could be taken. The Supreme Court ruled in 1998 that civil asset forfeiture is not considered a fine, so the Eighth Amendment doesn’t apply. But even if it did, the fact that Congress has explicitly allowed for such forfeitures would still meet the conditions of Waters-Pierce Oil Co. v. Texas. Civil asset forfeitures may be determined to be unAmerican at some point in the future, but they’re in line with the Constitution as it’s interpreted today.

The “excessive fines” clause also does not apply to fines levied as a result of lawsuits where the government it not a party. For example, the civil lawsuit against OJ Simpson resulted in fines that essentially bankrupted him, but those fines were not subject to the “excessive fines” clause. Had the government been a party to the wrongful death lawsuit against Simpson, any fines would have been subject to the clause.

“Cruel and unusual punishment” is the most commonly litigated clauses of the Eighth Amendment as what has historically been considered “cruel and unusual” has changed as America has changed. It was once considered acceptable to disembowel someone as punishment for a crime, but that punishment was rejected in 1879. The death penalty is neither cruel nor unusual (and thus qualifies as an American value), except that it’s unAmerican to apply it to youths or the mentally incompetent, although those limitations are relatively new (2010/2012 and 2002, respectively).

There is disagreement within the Supreme Court itself and among Constitutional scholars whether such evolving standards are appropriate, but to date the Supreme Court has been willing to update federal laws in accordance with a modern understanding of what is and is not “cruel and unusual.” Unfortunately, this can result in rulings that combine with other social factors (such as racism) to produce unAmerican outcomes, such as life imprisonment for minor drug crimes under Three Strikes laws that are disproportionately applied to minority offenders.