Walden: How many of you have actually read it? 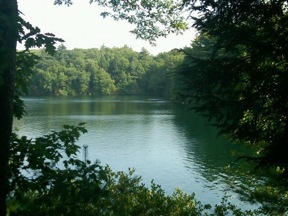 Walden is one of those books everyone’s heard of, but I frequently wonder how many people have actually read it.

It is, of course, the very stuff of high school English classes. I still remember by eleventh grade teacher, Mrs. Cummings, tell us that Thoreau lived what Emerson preached. Ralph Waldo Emerson was the great American philosopher of his day, advocating a simpler lifestyle and harmony with nature; Henry David Thoreau lived a simpler lifestyle in a small log cabin next to Walden Pond, outside Concord, Massachusetts, where both men live. Together, they made up the Janus of American Transcendentalism.

“I went to the woods because I wanted to live deliberately,” Thoreau wrote of his experience, “to front only the essential facts of life, and see if I could not learn what it had to teach, and not, when I came to die, discover that I had not lived.”

His book, Walden, has since become part of the American literary canon, part of American myth, It’s a seminal work of nature writing.

But has anyone actually read it?

The first time I hit up Walden, I was studying for my comprehensive exams for my master’s in English at the University of Maine. On an early-autumn Saturday, I pilgrimaged to Walden, a four-hour drive, to read the book on the shores of the pond. I bought a copy at the bookstore there, read several chapters, then decided to hike around. Swimmers frolicked at the small beach near Walden’s east end. Canoeists drifted across the pond’s center. A train rumbled along the far ridge. This was hardly a natural setting of silence and solitude.

A hiking path rings Walden’s shores while another runs the crest of the ridgeline that circles the pond. Footpaths criss-cross between them like cobwebs. I always took the route that let me be as close to the water as possible. I wanted to see the pond’s nooks and crannies. People were tucked into almost every one. At least one couple, figuring it was “private enough,” were getting it on in the water a few feet offshore.

In later years, the Massachusetts Department of Conservation and Recreation would string barbed wire sans barbs along most of the footpaths as part of an erosion control project. So many feet trammeled the pathways that the hillsides themselves were getting packed and beaten. The fencing gave the woods a kind of concentration camp feel, if you can believe it. No one seemed to give the fencing any heed, anyway, though.

I spent so much time exploring on that first day that I didn’t have time to finish the book. Instead, I dipped it in the pond. I made sure it was sopping wet. Gingerly, I carried it, dripping, up the sloping paved walkway to the parking lot and tucked it into the truck of my car.

I’ve repeated the drenching only a few times since, giving away Walden-soaked copies of Walden as special gifts to a few dear friends over the years, people who’d “get it.” For such folks, the gift is a treasure. 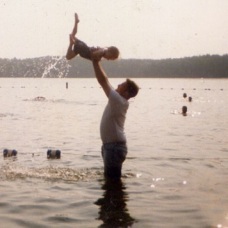 I’ve returned to Walden several times over the years. On one early trip, my daughter talked me into swimming with her, although I’d not anticipated it at all. I waded into the pond with her and let her splash around, and I lifted her high into the air. My wife took pictures. Thereafter, my daughter always loved to return to “The Pond.”

I’ve returned to Walden, too, although I’ve never made it all the way through the book. I’ve read snippets. I suspect a lot of people can make that claim, at least. It helps that Thoreau virtually speaks in aphorisms—“to maintain one’s self on this earth is not a hardship but a pastime, if we will live simply and wisely”…”a man is rich in proportion to the number of things which he can afford to let alone”… “If you have built castles in the air, your work need not be lost; that is where they should be. Now put the foundations under them” … ”Simplicity, simplicity, simplicity!”

When I graduated from high school, Mrs. Cummings gave me a dictionary as a gift. She inscribed it with what has become my favorite Thoreau-ism: “If a man does not keep pace with his companions, perhaps it is because he hears a different drummer. Let him step to the music which he hears, however measured or far away.” I post that quote on my office door every few weeks.

Thoreau’s aphorisms are as rich as the maples along Walden’s shores as they flush gold and red in autumn. He gives himself over to a (mostly) self-sufficient lifestyle in the woods, and he finds delight in it. “I have, as it were, my own sun and moon and stars, and a little world all to myself,” he says. He spends most of his days carrying out the daily business of living—building his cabin, tending to his beans, cutting firewood, fetching water—or exploring his surroundings. “[F]or I was rich,” he says, “if not in money, in sunny hours and summer days, and spent them lavishly.”

I love, love, love the way Thoreau revels in the world around himself. It is enough to just be: “It is true, I never assisted the sun materially in his rising, but, doubt not, it was of the last importance only to be present at it.” 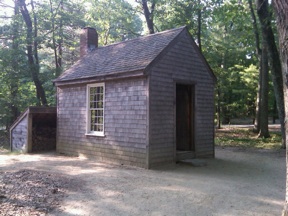 Thoreau spent two years in the woods along Walden Pond. During that time, he frequently walked into town, where he had his mother cook for him sometimes. He took the first of his trips to the Maine woods during that time, too. So, he wasn’t the reclusive hermit history has sometimes led us to believe—an image he himself cultivated. “I love to be alone,” he wrote. “I never found the companion that was so companionable as solitude.”

After his two-year sojourn, Thoreau returned to civilization. “I left the woods for as good a reason as I went there,” he wrote. “Perhaps it seemed to me that I had several more lives to live, and could not spare any more time on this one.”

Yet, for the rest of his life, Thoreau seldom ventured too far away from his home in Concord. He went on trips—most notably to Cape Cod and back to Maine—but his tie to the lands around Concord bound him tight until his death in 1862.

Walden has never been out of print, so someone must be buying it—but I wonder if it’s one of those books that people have even if it’s one they haven’t necessarily read. Much of Thoreau’s mid-nineteenth-century style is cumbersome for modern readers, and parts of the book are downright preachy. Much of Thoreau’s prose is beautiful, too, though.

“[A]s the sun rose, I saw it throwing off its nightly clothing of mist, and here and there, by degrees, its soft ripples or its smooth reflecting surface was reveled, while the mists, like ghosts, were stealthily withdrawing in every direction into the woods, as at the breaking up of some nocturnal conventicle.” 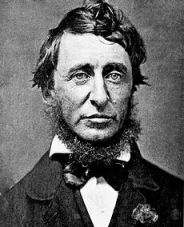 To know such things exist in the world is reason to get up every day. That’s why I’ve come to believe that the idea of Thoreau, the idea of Walden, are what really matter most. “A lake is the landscape’s most beautiful and expressive feature,” Thoreau wrote. “It is earth’s eye; looking into which the beholder measures the depth of his own nature.”

My return to Walden this week—all the way through the book for the first time ever—has been a treasure. It’s not that the book awed me, even if Thoreau’s legacy certainly does. Rather, it was good to be reminded why Thoreau is worth knowing. I, like so many of the writers I’ve spent time with over the past two weeks, owe him a tremendous debt for leading the way, for showing us how, for walking to the beat of his own drum.

“I did not wish to take a cabin passage, but rather to go on before the mast and on the deck of the world, for there I could best see the moonlight amid the mountains,” Thoreau said. “I do not with to go below now.” 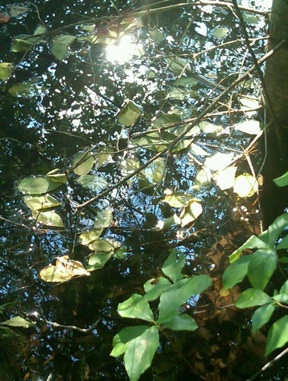