Peter Handke: the truth about sorrow…

What makes Handke exceptional is his willingness to engage us as well as himself in the difficulty of telling our truths, sharing our sorrows, interpreting our dreams…. 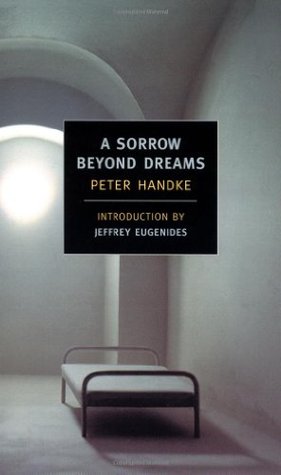 A Sorrow Beyond Dreams by Peter Handke (image courtesy Goodreads)

For the last (well, perhaps next to last) work from the “world literature” segment of the 2015 reading list, I return to an author who has decidedly influenced me in the way I write, in the way I think about writing, in the way I assess writing, particularly the writing of literature. I have written before about the great Peter Handke, the brilliant and controversial Austrian novelist, playwright, and filmmaker and about the power of his work to force the reader to reexamine his/her ways of looking at literature and at life.  No author of our time has been more relentless in his search for truth, nor has any author been able to say more with fewer words than Handke. For those few of you who know my work, a light bulb has probably just come on. For those of you not familiar with my work, please go buy it so that I can become a rich, vapid celebrity and lose all this delicious artistic integrity I’m always on about.

Handke is relentlessly brave, sometimes foolishly so, in his pursuit of what it means to be alive and writing about being so, so it should come as no surprise that he is equally as brave and equally as relentless in his examination of death and what it means to be so. His brilliant short meditation A Sorrow Beyond Dreams, written in the weeks after his mother’s suicide in early 1972, is vintage Handke: his search for the meaning of, in this case not simply the death of his mother but her death by suicide and the reasons behind her decision to end her life, as well as his search for what her death means to him, is a tour de force: terse, sometimes curt as a news item, sometimes poetic as a Heine lyric. The result is a heartbreaking work of staggering genius that actually is a heartbreaking work of staggering genius.

Handke’s extraordinary place in world letters is noted in the introduction to this, the New York Review of Books edition of A Sorrow Beyond Dreams by Jeffrey Eugenides. At one point he offers this excellent explanation of how Handke’s postmodernism differs from the flamboyance of works by authors such as Barth and Pynchon:

Though full of the standard hesitations and skeptical of omniscience, A Sorrow Beyond Dreams displays no high-low conflations, no outright attack on political authority. There is just a rigorous demonstration of the failure of language to express the horror of existence….

The American postmodernists responded to the death of truth by heaping fiction upon fiction. For them it was an invitation to the carnival of the imagination. Handke isn’t willing to give up  his search for the truth – even if it requires the death of the imagination – or to play games in the meantime. As he says at the end of [the memoir] “Someday I shall write about this in greater detail.”

As I noted above, in trying to get at the meaning of his mother’s death, at the truth of his own loss, Handke realizes that his skill as a writer is his enemy as skill with language will impede his ability to get to the truth about his mother’s life and death and his experience of it:

…the more fiction we put into a narrative, the more likely it is to interest others, because people identify more readily with formulations than with recorded facts.

We learn, for instance, that Handke himself is the child of a wartime romance his mother had with a much older married man, a bank clerk who’d been inducted into the German army. When he was transferred away, she married a gruff army sergeant “who had been COURTING her for some time….” (Throughout the narrative Handke puts terms into all caps in order to underscore the ridiculousness of trying to convey the reality of his mother’s plight – an unwed mother in wartime Germany – in mere words.) Handke reveals part of his mother to us by explaining that his mother never got past her love for his father:

…twenty years later, she still longed to feel for someone what she had then felt for that savings-bank wraith. But there never was ANOTHER: everything in her life had conspired to inculcate a kind of love that remains fixated on a particular irreplaceable object.

And so she was nothing and never would be anything; it was so obvious that there was was no need of a forecast. She already said “in my day,” though she was not yet thirty. Until then, she hadn’t resigned herself, but now life became so hard that for the first time she had to listen to reason. She listened to reason, but understood nothing.

She wasn’t lonely; at most, she sensed that she was only a half. But there was no one to supply the other half.

(Of course what is written here about a particular person is rather general, but only such generalizations, in explicit disregard of my mother as a possibly unique protagonist in a possibly unique story, can be of interest to anyone but myself. Merely to relate the vicissitudes of a life that came to a sudden end would be presumption.

(The danger of all these abstractions and formulations is of course that they tend to become independent. When that happens, the individual that gave rise to them is forgotten – like images in a dream, phrases and sentences enter into a chain reaction, and the result is literary ritual in which the individual life ceases to be anything more than a pretext….)

Proceeding from this premise, Handke then moves through the grim history of life in Germany after WWII, of his mother’s self-sacrifice, of his step-father’s drunkenness, of their alternately volatile and passionate relationship, a relationship that produced other children, though children conceived out of the habits of marriage rather than out of the love of the parents. And all the time the family is, like everyone they know, living through the re-education, rehabilitation, and the rebuilding of Germany – a painful process measured primarily in quality of life improvements:

The first electrical appliance: an iron, a marvel had “always longed for….” The mixer, the electric stove, the refrigerator, the washing machine: more and more time for herself.

But for Handke’s mother, such “time saving devices” only call up her old demons:

…she only stood there stiff with terror, dizzy after her long years as the good household fairy. But she had also had to husband her feelings so much that she expressed them only in slips of the tongue, and then did her best to to gloss them over….

Gradually she discovers the world – and herself – through her son. Handke is at university as a scholarship student and his mother begins reading literature that her son shares with her. She reads “Fallada, Knut Hamson, Dostoyevsky, Maxim Gorky, then Thomas Wolfe and William Faulkner.” Handke observes that, “To her, every book was an account of her life.. and in reading she came to life; for the first time, she came out of her shell; she learned to talk about herself; and with each book she had more ideas on the subject.”

But the experience of literature, which Handke’s mother takes so personally, eventually leads her into depression. Worse yet, Handke discovers that in a real sense, he is the cause. During one of his visits home she reveals this to him:

And she looked at me from far away as if I were her BROKEN HEART, as Karl Rossmann was for the humiliated stoker in  Kafka’s novel [Amerika]. BROKEN HEART. Frightened and exasperated, I left the room.

Only since then have I been fully aware of my mother.

Time passes. Handke finds success as a writer and, busy with work and life, his contact with his mother lessens. Without her connection to him she gradually loses interest in literature, in self-understanding, in life.

And so she takes her life.

Handke is torn between a weird giddy happiness for his mother’s freedom and the grief and sense of loss he feels. As he explains, writing about the experience has not brought the relief that he initially thought it might:

It is not true that writing has helped me. In my weeks of preoccupation with the story, the story has not ceased to preoccupy me. Writing has not, as I first supposed, been a remembering of a concluded period of my life, but merely a constant pretense at remembering, in the form of sentences that only lay claim to detachment. Even now I sometimes wake up with a start, as though in response to some inward prodding…breathless with horror….

After this, Handke realizes that those lost to us are composed of the flickers of memories that come to us without being beckoned, often in spite of our wish to remember:

As a child she was moonstruck./In one dream she had a second face, but it too was rather worn./She was kindly.

And, of course, the narrative ends with that nearly perfect expression of the writer’s helplessness in the face of the irrevocable truth of life:

Someday I shall write about all this in greater detail.

The writer and the reader know that this is a lie. But it is Picasso’s lie – the lie that tells the truth. Both Handke and we know what the truth is. Greater detail will not change that truth.

But isn’t it pretty to think so?