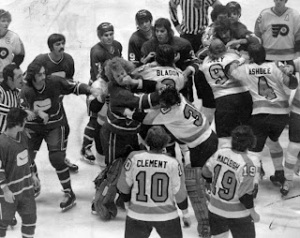 Here’s the greatest sports quotation of all time. But first, a little background:

On December 29, 1972, the National Hockey League’s Philadelphia Flyers found themselves in Vancouver for a game with the Canucks. The Flyers were known as the “Broad Street Bullies” back then. Fists, punches and dirty stickwork were as much a part of their game as their hockey skills were.

That night, four Flyers went into the stands after someone in the stands reached over the glass and pulled the hair of the Flyers’ Don Saleski as he fought one of the Canucks. (Saleski had long hair, and many players didn’t wear helmets back then.) Well over 100 penalty minutes were called in that game, most of them during a nasty third period.

On their next trip to Vancouver (in early February), four Flyers had to appear in court as a result of the donnybrook in the prior game. There was speculation before the game that some of the Flyers would be arrested and tossed into the clink. You’d think that might be enough to curb Philadelphia’s blood lust, at least for a night. If so, you’d think wrong.

One of the Flyers’ goons (there’s no other word to describe him) at the time was Andre “Moose” Dupont. In 800 National Hockey League games, he amassed nearly 2,000 penalty minutes. In 46 games for the Flyers that year, he ran up 164 minutes in the box. Dupont was the fuse for the powder keg during the return visit. He cut and bloodied the Canucks’ Bobby Schmautz with a high stick, but the Flyers’ Bobby Clarke and Rick MacLeish scored shorthanded during the Canucks’ ensuing five-minute power play. The Flyers won the game, 10-5.

After the game, Dupont had this to say:

“That was a lot of fun. We don’t go to jail, we beat up their chicken forwards, we score ten goals, and we win. And now the Moose drinks beer.”