Whether Donald Trump is a full-fledged fascist or “merely” a proto-fascist depends on which historian’s definition of fascism you prefer. Part seven of a series. 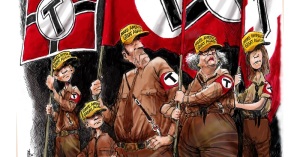 Fascism according to Umberto Eco

Umberto Eco was an Italian novelist and public intellectual who, in the June 22, 1995 issue of the New York Review of Books, wrote an essay titled “Ur-fascism” (eternal fascism) in which he discussed fascism in general and identified fascism’s characteristics.

In his essay, he writes that it would be difficult for “the totalitarian governments that ruled Europe” prior to World War II to “reappear in the same form in different historical circumstances.” In this way Eco agrees with the many historians who have claimed that fascism was essentially unique to the period between World Wars I and II. But Eco thinks that “behind a regime and its ideology there is always a way of thinking and feeling, a group of cultural habits, of obscure instincts and unfathomable drives.” He calls fascism a “fuzzy totalitarianism, a collage of different philosophical and political ideas, a beehive of contradictions” that was the result of “political and ideological discombobulation.” To Eco, “fascism was philosophically out of joint, but emotionally it was firmly fastened to some archetypal foundations.”

Eco identified 14 of those archetypal foundations in his essay, and he writes that “it is enough that one of them be present to allow fascism to coagulate around it.”

Of these 14 characteristics, Trump closely matches nine and has some aspects of the remaining five. With respect to #1, Trump has attended church, although the church he attended focused on positive thinking and never criticizing yourself. He’s focused on traditional values as he imagines the Founding Fathers would have meant them, and he’s comfortable with different people having different ways of honoring those values (ie syncretism). And Trump’s views on various technology and science topics (like his industrial climate disruption denial) as well as his attacks on the Common Core education standards indicate that he’s anti-intellectual.

Trump’s statements on issues as varied as Muslim immigration, Syrian refugees, mass Mexican deportation, birthright citizenship, national marriage equality, and repealing Obamacare indicate that he does not share the modern values that Eco identifies in characteristic #2 – life, liberty, the pursuit of happiness, equality, and brotherhood. Similarly, Trump’s anti-science stances on vaccines, industrial climate disruption, and GMO foods indicate that he’s not rational and that he either doesn’t understand or outright rejects science.

There’s no question that Trump acts without thinking and views thinking negatively (characteristic #3), as his recent campaign staff shakeup and his unwillingness to temper his aggressive approach to campaigning.

Trump’s demotion of Paul Manafort for trying to “tame” Trump shows that Trump matches characteristic #4 as well – criticism is bad and “disagreement is treason.” For Trump, the personal loyalty of his underlings is paramount.

Large parts of Trump’s campaign are emotional appeals to reject the “Other,” whether that other be Mexicans, Muslims, or blacks. And it’s no coincidence that all the “others” being rejected by Trump are non-white. As Eco points out in characteristic #5, fascism “is racist by definition.”

Trump’s biggest appeal is to the “frustrated middle class” that Eco identifies in characteristic #6. The white middle class, especially white middle class men, don’t feel they have a voice in politics, have been out of work longer than most, and feel their historical privileges slipping away as a result of cultural and demographic shifts in the United States. In other words, Trump’s holds greatest appeal to the very people most likely to be attracted to fascism.

Trump’s anti-Muslim rhetoric is not merely xenophobic (Eco’s characteristic #7), but also engages in conspiracy theories that range from Birtherism to rejecting the year-long refugee vetting process for Syrians to claiming that Obama won the 2012 election due to widespread voter fraud. And his slogans of “Americanism, not globalism” and “America First” are both steeped in nationalism.

Trump’s has spent a great deal of time painting China as the US’ main rival in international trade and as a company that is humiliating America. Yet Trump has only said that we can beat China if he’s elected, not that we could militarily defeat China if it came to a conflict. As such, Trump only matches part of Eco’s characteristic #8.

There’s no indication that Trump views “life as permanent warfare,” although his ability to build a successful real estate empire and his social darwinism point to a perspective that life is a “struggle.” Whether or not Trump feels that pacifism is “trafficking with the enemy” is also unclear, indicating that Trump matches only part of characteristic #9.

Eco identifies twin cults of heroism and death as characteristic #11. Trump’s entire approach – that he alone can solve America’s problems, that he alone can speak for Americans, that his business acumen makes him singularly able to do pretty much anything – is that of a superhero. But there’s no indication that Trump wants people to die heroically for his cause.

Trump’s blatant disrespect of women goes back decades and closely matches one half of Eco’s characteristic #12. The other half is condemnation of “deviant” sexuality like homosexuality. While Trump has been supportive of LGBT people in the past, he wants to throw gay marriage back to the states (where many will ban it, throwing the legal status of thousands of marriages into limbo) and has close relationships with many overt homophobes. 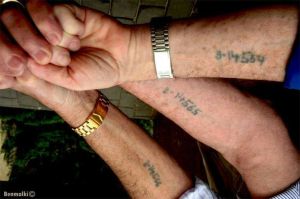 Trump’s call to limit individual freedoms has been largely focused on the rights of Muslims and other supposed undesirables. But he also supports NSA surveillance and the restrictions on civil liberties imposed by the USA PATRIOT Act. In his Republican National Convention speech, Trump made himself the “interpreter” of the Republican’s “common will” with statements like “I am you voice.” And Trump has been attacking the legitimacy of this election as well as the legitimacy of the government itself. In these respects, Trump closely matches characteristic #13 as well.

Eco’s last characteristic (#14) is the use of an “impoverished vocabulary” and “elementary syntax.” Depending on who’s doing the analysis and what speeches are used in the analysis, linguists have found that Trump speaks using grammar typical of children aged 11 or younger, a 4th grade reading level, or just below 6th grade. And his vocabulary is similarly simple. Trump may be speaking at such a low level because it’s the best way to relate to his supporters, many of whom never went to or completed college or even dropped out of high school. But Trump could be speaking in this way to, as Eco put it, “limit the instruments for complex and critical reasoning.” There’s not yet enough information to say one way or the other.

Eco said that it only takes one of these 14 different characteristics to serve as a seed from which fascism can grow. Does that mean that Eco would consider Trump a fascist? Eco died in early 2016, so we cannot ask him, and several Google searches failed to turn up any site online where Eco expressed an opinion on Trump’s potential fascism. But I think that Trump hits enough of Eco’s criteria that Trump qualifies as a fascist. Not as a Hitler, but rather a Mussolini – lacking in philosophy, strong in rhetoric, and flexible enough with his ideology that he could swing from “militant atheist” to someone who “welcomed the bishops who blessed the Fascist pennants,” metaphorically speaking.

The conclusion of this essay will be published this afternoon