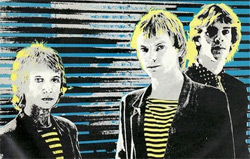 Results: The past week provided ToR fans with about as much drama as the 4th quarter of the Patriots/Titans game, huh? In our most recent match the band currently famous for providing CSI theme music simply poleaxed some pretty good competition, making it four in a row for the favorites. The numbers: #3 The Who 82%; #9 AC/DC 16%; Queensryche 2%.

Maybe we can give voters something to think about this week. Let’s start in the Budokan region, where perhaps the greatest band of the New Wave hosts the Piano Man and arguably the most underappreciated artist in rock history.

Give ’em a listen, give ’em a vote, and remember, we’re asking you to think about the greatest bands in history. As we’ve suggested before, this means we’re working toward a critical standard that transcends mere taste. Polls close tomorrow morning.