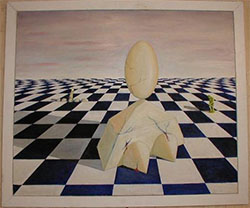 The universe is destined to die. Some physicists believe that this death will occur as the rate of expansion tears every atom apart. Others believe that the Second Law of Thermodynamics means that, trillions of years into the future, all that will be left is the universal background radiation, after all the suns have burned out and all the black holes have even evaporated. But even before the Big Rip or the heat death of the universe, entropy – the degree of disorder in our own systems – is destined to rule our future. We can struggle against it, and we can even beat it back for a time, but ultimately entropy wins and we die. Our works fall apart. And memory fades.

Today, we explore entropy in the written word.

I met a traveller from an antique land
Who said: “Two vast and trunkless legs of stone
Stand in the desert. Near them on the sand,
Half sunk, a shattered visage lies, whose frown
And wrinkled lip and sneer of cold command
Tell that its sculptor well those passions read
Which yet survive, stamped on these lifeless things,
The hand that mocked them and the heart that fed.
And on the pedestal these words appear:
`My name is Ozymandias, King of Kings:
Look on my works, ye mighty, and despair!’
Nothing beside remains. Round the decay
Of that colossal wreck, boundless and bare,
The lone and level sands stretch far away.

I’ve chosen Ozymandias, by Percy Bysshe Shelley, to opens our exploration of entropy for a reason. Sure, it’s one of my favorite poems, but there’s a reason for that. Here we have a great king, creator of massive monuments to his own greatness, and yet his works lie destroyed, eroded and buried by entropy. But the poem is about the arrogance of Man himself, and it’s a cautionary tale for the creators of such monuments as the Empire State Building. Our creations too will be reclaimed by nature.

In much the same was as Ozymandias, the concept of entropy is treated in verse set to music, aka song lyrics. One of my personal favorites is the song Monument, by Butterfly Messiah:

It’s a testament to man

It’s a testament to man
it is his monument

(Translation)
It collapses from it’s own bigness
A wonder to behold
After death…
thus one goes to the stars,
such is the way to immortality

But even immortality among the stars is fleeting if the universe itself is destined to slowly die….

There are people who see, if not a future for the universe, at least hope for life in some form even after protons, electrons, and neutrons have ceased to exist. Physicist and science fiction writer Gregory Benford is one such writer, and in his Galactic Center novels (In the Ocean of Night, Across the Sea of Suns, Great Sky River, Tides of Light, Furious Gulf, and Sailing Bright Eternity), we’re introduced to a future of machine intelligences hunting human beings as insects, humanity driven out from an Earth about to be destroyed, and a war between biological, electronic, and theoretical magnetic lifeforms that threatens to destroy all three forms of life even in the face of a entropic future for the galaxy in the far future. While there are six novels to the complete series, they go in pairs, and the first four novels are much better than the last two. Benford’s universe is ruled by the real laws of physics, although they’re occasionally stretched a bit into the the theoretical, but the backdrop is worlds and civilizations slowly winding down.

Our interest in entropy goes much farther back than Shelley and is hardly limited to the domains of poetry and science fiction. In fact, the Bible itself enshrines many of the concepts of entropy within it’s pages. For example, Ecclesiastes 3 says:

And Ecclesiastes 3:20 says, in part, “all are of the dust, and all turn to dust again.” And the concept of returning to the dust from which God made us is a repeating theme throughout the Old and New Testaments.

When Yeats wrote The Second Coming, he had in mind the ravages and chaos of war rather than the decay of entropy. I expect that “Things fall apart; the centre cannot hold;” speaks more to the military adage that no plan survives contact with the enemy than it does to any fundamental physical law, yet at least one other poet has used Yeats’ original as her jumping-off point for a poet that strikes deep into the atomic mindset. Ann K. Schwader wrote Slouching toward Entropy and published it online via Strange Horizons and via her book of science fiction genre poetry, Architectures of Night. I’ve posted only the first two stanzas below out of concerns for copyright, but I can’t recommend highly enough that everyone take the time to read the poem in it’s entirety. It hit me in gut, metaphorically speaking.

Not clean light, after all: not sweet atomic
absolution of our myriad sins
in one swift Lenten smear of ash, faint thumbprint
shadow on a shattered concrete sky.

The silence we were promised after sirens
above a blasted blameless graveyard world
is broken daily into shards of shrapnel
both trivial & lethal, ever-cresting
tide eroding eyes & ears & minds. (source: Strange Horizons)

Another poet I was pointed toward by S&R’s own Dr. Slammy is Charles Baudelaire. In reading many of his poems to find one I felt matched what the theme of this exploration, I came across many that were certainly disturbing, but it wasn’t until I came across L’Horloge (The Clock) that I found what I was looking for.

Impassive clock! Terrifying, sinister god,
Whose finger threatens us and says: “Remember!
The quivering Sorrows will soon be shot
Into your fearful heart, as into a target;

Nebulous pleasure will flee toward the horizon
Like an actress who disappears into the wings;
Every instant devours a piece of the pleasure
Granted to every man for his entire season.

Three thousand six hundred times an hour, Second
Whispers: Remember! â€” Immediately
With his insect voice, Now says: I am the Past
And I have sucked out your life with my filthy trunk!

Remember! Souviens-toi, spendthrift! Esto memor!
(My metal throat can speak all languages.)
Minutes, blithesome mortal, are bits of ore
That you must not release without extracting the gold!

Remember, Time is a greedy player
Who wins without cheating, every round! It’s the law.
The daylight wanes; the night deepens; remember!
The abyss thirsts always; the water-clock runs low.

Soon will sound the hour when divine Chance,
When august Virtue, your still virgin wife,
When even Repentance (the very last of inns!),
When all will say: Die, old coward! it is too late!” (source: FleursduMal.org)

Baudelaire appears to be criticizing the tyranny of the clock, as it relates to our how our perceptions of time controls our lives. But I also find a warning to his readers that life is short, and that all clocks, external and internal to ourselves, eventually run down and stop. Again, entropy.

Even interminable S&R posts such as this one must come to a conclusion eventually. So I leave you with an excerpt from the Isaac Asimov short story The Last Question. It too, addresses entropy, telling a story trillions of years long in just a few pages, and it is one of my personal favorite short stories by Asimov – or anyone else, for that matter. If you take the time to read the entire story behind the link, I believe you’ll understand why.

Adell was just drunk enough to try, just sober enough to be able to phrase the necessary symbols and operations into a question which, in words, might have corresponded to this: Will mankind one day without the net expenditure of energy be able to restore the sun to its full youthfulness even after it had died of old age?

Or maybe it could be put more simply like this: How can the net amount of entropy of the universe be massively decreased?

Then, just as the frightened technicians felt they could hold their breath no longer, there was a sudden springing to life of the teletype attached to that portion of Multivac. Five words were printed: INSUFFICIENT DATA FOR MEANINGFUL ANSWER.