The Brothers Grimm and the functions of the folk tale…

Wilhelm and Jacob Grimm‘s compilation of stories known as Grimm’s Fairy Tales are powerful, perhaps shocking (perhaps not), entertainment for children of any age – and a structuralist literary critic’s dream… 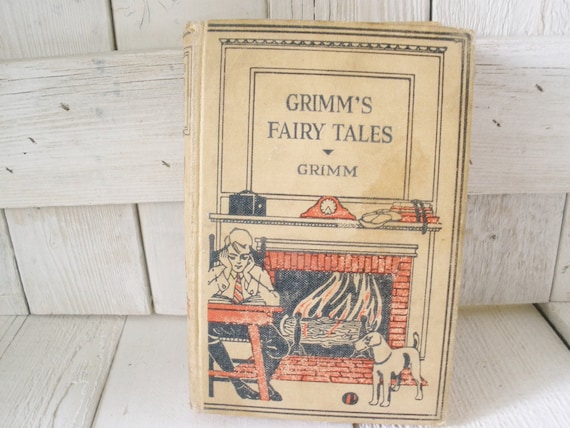 The next book from the 2015 reading list is another of those “rescued” books of mine. Lea  and I were wandering around a local antique/junk shop when we came across a “children’s edition” (or what passed for a children’s edition early in the 20th century). The book I have was published by J.H. Sears and Company of New York, although the edition I have was “set up, printed, and bound” by the Kingsport Press of Kingsport Tennessee. There is no publication date, but the book is inscribed, “Nancy Ivey/Grade 1/1929-30” so this book is at least 85 years old, perhaps older.

No translator information is provided in the text. (J.H. Sears was not big on giving credit, one suspects, to avoid paying author/translator royalties.) From textual evidence I have been able to determine that the translator was one Susannah Mary Paull, also credited as Mrs. H.B. Paull. Her translation was done in 1872. Mrs. Paull died in 1888. So for the economical Mr. Sears, use of her translation was a sweet deal. At most he may have paid a small “work for hire” fee, though that seems unlikely. Mrs. Paull was noted as a translator for young readers.

As I mentioned above, however, what makes this translation of interest to a contemporary reader is that this translation is one that leaves in much of the gore, violence, and brutality that was  systematically excised ever further as the 20th century went on – and that makes the new Jack Zipes translation a revelation to many readers. One doubts that Mrs. Paull’s translation would pass muster as a children’s book these days. But for a reader like me, it made reading the tales far more enjoyable than the  sanitized versions I read as a child.

And so to the tales.

The most famous of the tales are here, but not surprisingly, for me, at least, they held less charm and interest than less well known stories. “Cinderella,” “Snow White,” “Little Red Riding Hood,” “Sleeping Beauty,” “Hansel and Gretel,” and “Rapunzel” are perhaps too familiar. Even the slight variations that these tales have from those we knew in one sanitized version or another (most likely from Disney) are – not less interesting because the stories are too familiar – less interesting because the stories are all the same. They’re all, in one form or another, the original versions of the “woman and/or child in danger” plot line that has been revisited – and abused – repeatedly and unmercifully by movie makers. The themes of mayhem inspiring jealousy  (“Cinderella,” “Snow White,” “Sleeping Beauty,” “Rapunzel”) and “stranger danger” (“Little Red Riding Hood,” “Hansel and Gretel”) feel, for all the charm of these stories in the Grimm brothers’ collection – well, tired. Indeed, a jaded reader might imagine any of the beauties in that first group I mention uttering the famous advertising slogan: “Don’t hate me because I’m beautiful.” One can allow, though, that in “Hansel and Gretel” female readers see a brave female do a heroic deed, all too rare a plot turn.

There are many tales in this collection, however, that visit other themes – themes of interest for historical and cultural reasons. These themes include what one might call “life-lessons” aimed at explaining or enforcing the status quo and or explaining anomalies as part of the status quo. Here are some examples:

(Paull’s tale titles often vary from more familiar ones – the stories themselves, however, for those who’ve read Grimm’s Fairy Tales, will be immediately recognizable.)

“The Cat Who Married a Mouse” – A cat marries a mouse, treats her badly, and when she complains, eats her. The lesson? ” You will see every day in this world, among human beings, the strong oppressing the weak, and, if they complain, ill-using them for doing so.”

“The Rogues’ Holiday” – A pair of chickens and a pair of ducks trick a kind-hearted innkeeper out of a hearty meal and a night’s lodging. The lesson? “…he took an oath that he would never again admit such knaves into his house; ragamuffins who ate a good deal, paid nothing, and, above all, instead of thanks, performed knavish tricks.”

“The Fisherman and His Wife” – A poor fisherman catches an enchanted fish who promises the fisherman rewards if he will release his captive. At his wife’s prodding, the fisherman asks the fish for reward after reward for her until she reaches too high and is returned to her original humble condition. The lesson? “He went home to find the glories, the riches, and the palace vanished, and his wife sitting in the old hut, an example of the consequences of impious ambition.”

“The Mouse, the Bird, and the Sausage” – A mouse, bird, and sausage form a partnership and set up housekeeping together, each having an assigned task. The bird is influenced by the talk of a jealous friend to insist that they change their jobs, jobs for which they are both apt and fit – the result is disaster. The lesson? “And all this happened because one little bird listened to another who was jealous of the happy little family at home, and from being discontented and changing their arrangements they all met with their deaths.”

“The Singing Bone” – A recasting of the Cain and Abel story, this tale tells of how an older brother resents the success of his younger brother, kills him, and tosses the brother’s body into a stream to hide his crime and claim his dead brother’s reward. But the truth comes out. The lesson? “The wicked brother could not deny the deed; he was therefore ordered to be tied in a sack and drowned, while the remains of his murdered brother were carefully carried to the churchyard, and laid to rest in a beautiful grave.”

Noting that relationship between the Old Testament story and the folk tale “The Singing Bone” brings up another element of Grimm’s Fairy Tales that deserves at least a brief discussion before this essay ends. As I noted above in explaining why “Cinderella” and other of the most well known folk tales held less interest to me, there are certain structural elements that repeat again and again in these stories (those of you who immediately thought of a figure such as V.I. Propp, Claude Levi-Strauss, or Joseph Campbell may go to the head of the class). Without delving too deeply into Morphology of the Folk Tale, suffice to say that anyone who would understand the building blocks of tale telling could do no better than to read Grimm’s Fairy Tales. Heroes, their helpers, magic weapons, tricksters, enchantments, quests – it’s all there for the reader who insists that the best use of enchantment is as a frog for dissection, to be pithed, sliced up, and examined until all charm and wonder is gone. Have at it, mes amis. My recommendation is that you enjoy the genius of Jay Ward and company and try to figure out how many of Grimm’s stories get referenced.

I, meanwhile, will end this essay by examining one last tale. “The Twin Brothers” is one of the longer stories in the collection and caught my attention because one of the episodes in the tale is lifted directly from Gottfried von Strassburg’s Tristan. The story concerns two brothers who become hunters and who gain entourages of animal companions who do helpful little things like provide magical remedies for ailments like beheadings. The brothers decide to separate in order to pursue their individual fates.

One brother wins a princess by killing a dragon. Just as in Tristan, however, a cowardly knight claims to have killed the dragon and gathers its seven heads as proof (since the time of Gottfried von Strassburg’s telling of the incident, that dragon has gained six heads). The brother, however, had, just as Tristan did, cut out the dragon’s tongue(s) as proof of his victory. The knight is foiled and dishonored and the hunter gets the princess.

Other stuff happens – the dragon slayer brother is turned to stone by a wicked witch – his twin comes and saves him (and resists the advances of the princess who mistakes him for her husband). This doesn’t stop the rescued brother from cutting his savior’s head off for having, he thinks, used his identical status to mess about with the princess. Thankfully, there’s magic provided by one of their animal companions, and the brother is restored – and, upon their return to the dragon slayer brothers castle, the princess herself gives her husband proof of his brother’s goodness with an innocent remark.  I wouldn’t be at all surprised if it turned out that the princess had a twin sister who was beautiful and who fell madly in love with rescuer brother. Anyway, the brothers are reunited, the twin finds a happy home with his dragon slayer brother turned prince, and, as we all know happens at the end of a good fairy tale, they all live happily ever after.

Besides the obvious lesson that if you act bravely and honorably wonderful things will happen to you (though you may undergo some inconveniences such as getting beheaded), the story resonates for me because the episode lifted from Tristan offers clear proof that even “high” literature in one form or another can make its way into folk tales. For those of us who take reading and writing seriously (perhaps too seriously), that’s a wonderful ray of hope – maybe it is true that, in the end, there is no need to worry about classifying literature. Grimm’s Fairy Tales offers proof that if one wants to be remembered, telling a good story is a good way to achieve that goal.