Snappy Dream—Review: 4:13 Dream by The Cure 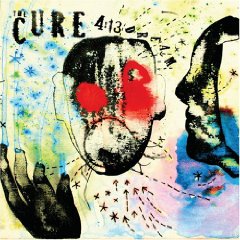 After The Cure’s 1989 platinum-selling breakthrough Disintegration, the band chose to get even moodier with their 1992 follow-up, Wish. Had they chosen to get a little poppier, instead, they very well might have created 4:13 Dream.

Following the restrictive Bloodflowers (2000) and the unmemorable hodge-podge that was their self-titled album, The Cure (2004), 4:12 Dream features a lineup of tunes that feels like a direct descendent to the songs of the band’s heyday.

Take, for instance, the long, slow, moody opener, “Underneath the Stars,” which comes complete with chimes and keyboard. Can anyone say “Pictures of You”?

“The Only One” comes from the same family of Cure-styled pop songs that spawned “Friday I’m in Love” and “Just Like Heaven.” The unapologetically herky-jerky “Freakshow” jams with new-wave funk—much like “Hot! Hot! Hot!”—underpinned by some crazy guitar noodling.

Even though much of the music sounds so darn upbeat, it wouldn’t be a Cure album without misery lurking in the lyrics, and indeed, Smith offers plenty of angst, anguish, and tortured self-loathing. “You know how it is with these promises/Made in the heat of the moment/They’re made before right becomes wrong/Whenever you’ve got what I want./And you’ve got what I want…” Smith sings in “The Real Snow White.” “It’s only for the night/And I will give it back tomorrow./I swear.”

The band long ago cemented its reputation as the gloomiest of the gloomers, and Smith happily proves once again that he can make unhappiness the highest of artforms. “I won’t try to bring you down about my suicide,” Smith sings with a snappy growl in “The Reasons Why.” “I am falling through the stars,” he says.

But as the old saying goes, you can never go home again. The Cure doesn’t try to, even if they do get out the old slide projector and show you pictures, which is just enough to evoke memories of Cure-gone-by without forcing listeners to return to the old neighborhood only to find it run down.

Some of the memories flash back quite a way, too. The unrelenting guitar in “Switch” makes the song the more mature brother of “Hanging Garden,” from the band’s 1982 Pornography. “Sleep When I’m Dead” also conjures that same spirit, although the new songs have a modern cacophonic busyness that would’ve made them out of place among those stripped-down underproduced songs of the early 80’s.

Smith also shows an occasional optimism that would’ve been out of place in those early days of dismal dreariness. In “The Perfect Boy,” for instance, things don’t work out so well for the song’s protagonist, but she doesn’t surrender. “And her heart may be broken a hundred times,” Smith sings, “But the hurt will never destroy her hope.”

The album isn’t a complete triumph. “The Scream” might’ve worked better as a moody downer, but Smith seems determined to create the definitive rock-and-roll scream. The resulting primal scream therapy-as-music lasts about three and a half minutes too long (the song runs a hypnotic 4:37). The following song, “It’s Over,” could’ve been something from a Van Hagar album if it wasn’t for Smith’s heady high-register wailing.

4:13 Dream is Cure-ish enough to satisfy fans and fresh enough to attract new listeners. The Cure’s rock icon status aside, new wave is old hat, and it’s much to Smith’s credit that he keeps pushing The Cure to remain relevant. 4:13 Dream is a dream worth having.