Sitting now with a Spitsbergen IPA and some gifted crackers and dried figs. Longyearbyen is brown and soggy as the lovely snow of two weeks ago is gone from town. It clings higher up and in the avalanche chutes. The sun rolls around the edges of the horizon, barely peeking through the mountains at times. I still feel the pitching boat and walking down the hall at the hotel leaves me rolling side to side as the building rocks under my feet. Weird that the land sways so.

Yesterday was an epic hike worthy of any good trip. Sarah and Kristin – two of the guides – have long wanted to do a hike together and specifically, each wanted to go to the Sweden House, Svenskehuset – a long-storied building from 1872. We anchored in Skansbukta for two nights allowing a morning landing. 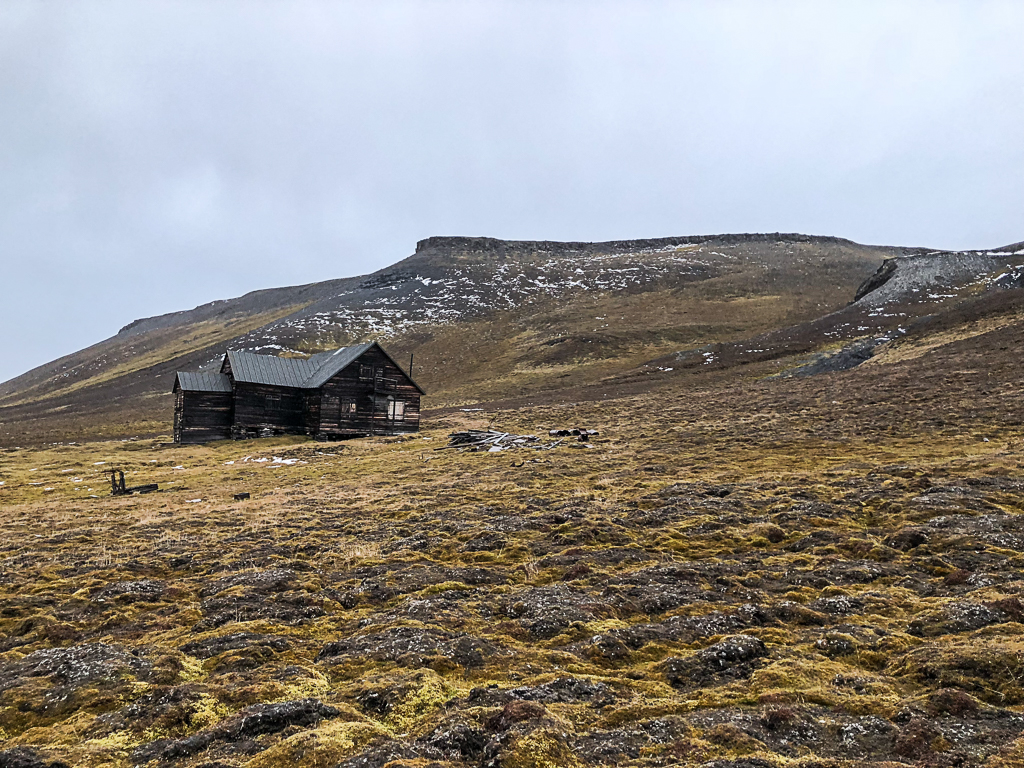 We started southwest along the coast; no trail, of course, but there is only one direction and one shoreline. Sarah and Kristin, Georgia, Patricia, Andrea, Offer, John, Isaac, Lindsy, Martina, Lena, me, Max, and Nora. We walked along the low bench just above the waterline. We crossed many polar bear tracks in the snow, a sow with a cub seemed to have walked most of our path – though we were backtracking them. Across the tundra, green with moss, puffy, soft and lumpy, down into a river bottom, across the frozen river and up the bank to the far side.

We passed a trapper’s cabin. The trapper was there for years, met a woman in town and married her. They moved together for the winter to the cabin, but she died that winter. She was buried on the hill above the cabin. He left in the spring and never returned.

We passed several herds of reindeer feeding, grazing across the slopes and benches around us. Down to the beach, thinking it 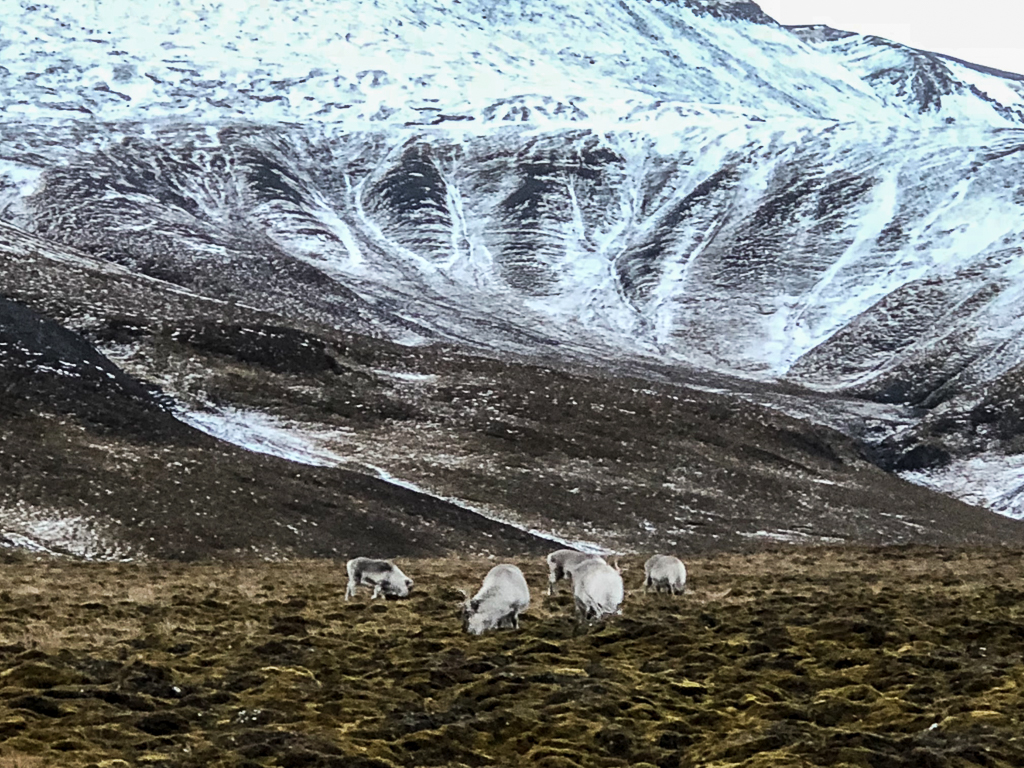 would be an easier path. The beach was ankle-breaker cobbles and narrow, ~3m wide at its widest. The wall above us was finely layered sediments solidified into rock. As we walked, rolling over, through, and along the cobbles, we moved up and down the tide line, off and on the wet rocks. It was slow and rough. I fell once, landing squarely on my recently-broken arm, falling backward, landing in the same way. Ow. 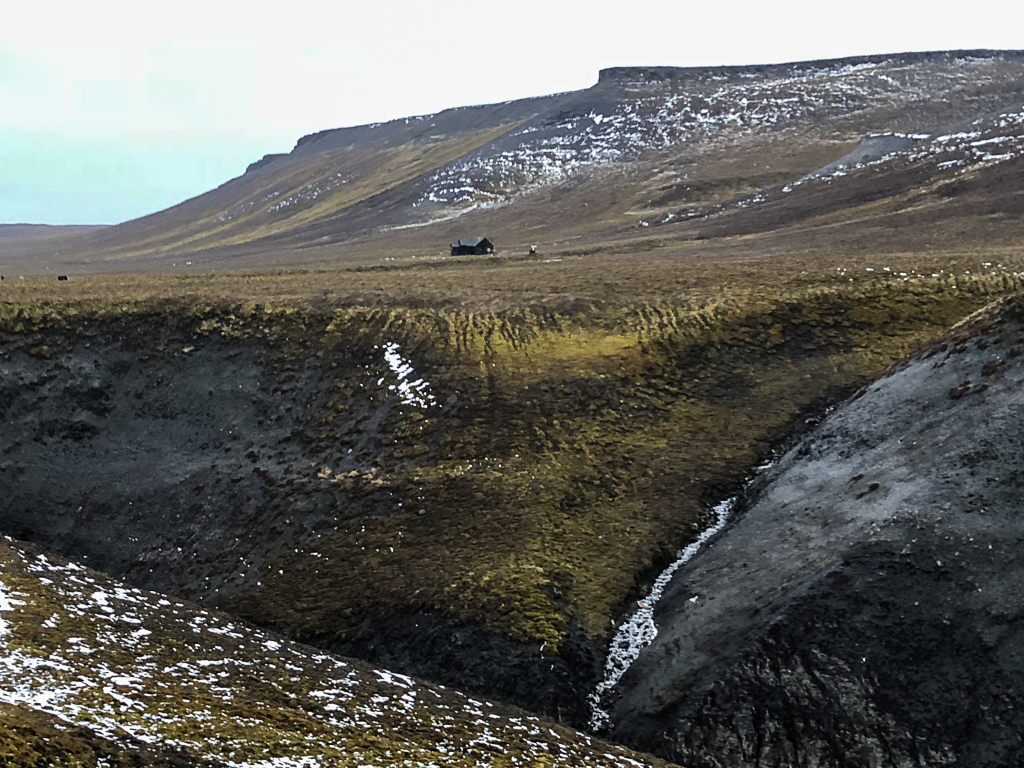 We came to a point, where the tide was up against the wall, so we backtracked to a river bottom where it cut through the sediments and drained into the ocean. We followed upstream, walking on the ice until we were able to climb the bank and continue on the tundra again. We crossed more tundra and another river, down, down, down, across the ice and then up, up, up to the west bank. And finally, after 13km and ~5 hours, we came to Sweden House. It was open, of course. We took down a few 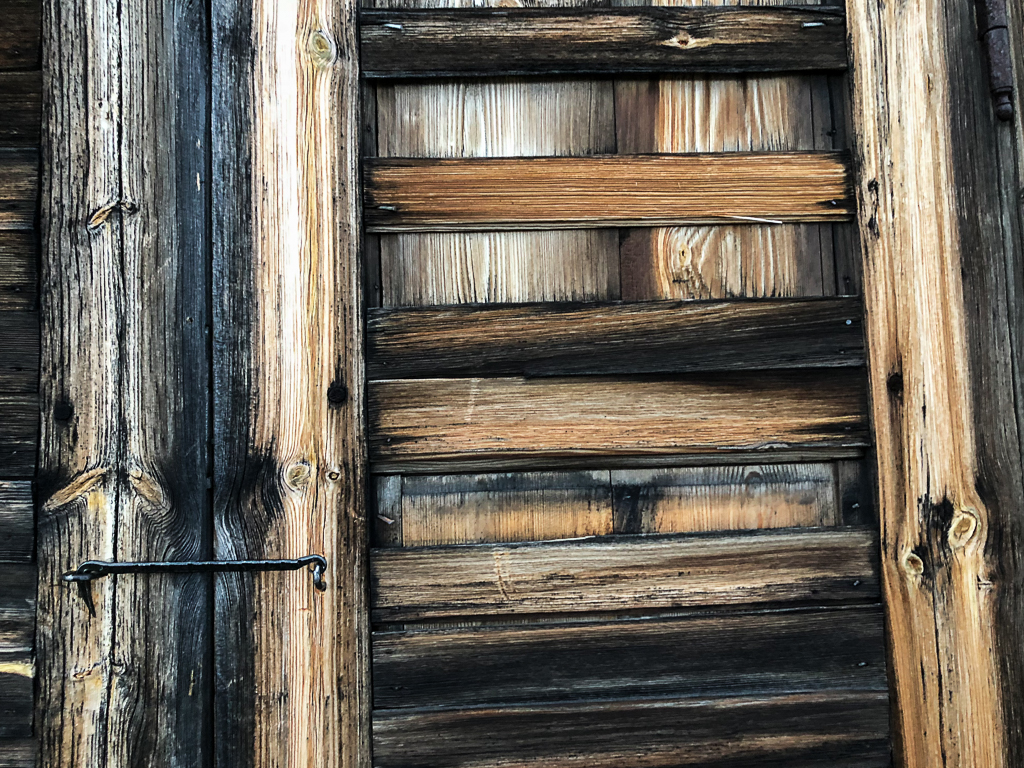 shutters and went inside for lunch. The structure was pre-built in Sweden in 1872. Taken apart and shipped to Svalbard as the headquarters for a man who wanted to mine dinosaur poop from the mountain (not gypsum but I can’t remember what it’s called). By the end of the first summer, it was obvious the endeavor would not be profitable. They packed the house with the remaining equipment, fuel, and supplies, and left it.

The same winter (1872–1873), a sealing ship froze into the ocean near the northwesternmost islands. The captain asked for volunteers to take the lifeboats south to this house, knowing that splitting his crew would allow them all to survive. There were enough supplies and shelter at Svenskehuset for as long as needed. Seventeen men dragged the lifeboats across the ice until they found open water and then rowed south into Isfjorden – about 220 miles of rowing in open ocean. They landed and opened the house.

In the spring, when the sealing boat was free from the ice, the sealers sailed south to pick up the 17 men. When they landed, there was no smoke and no activity, but there were two fresh crosses. The other 15 men were found dead in their bunks. Scurvy 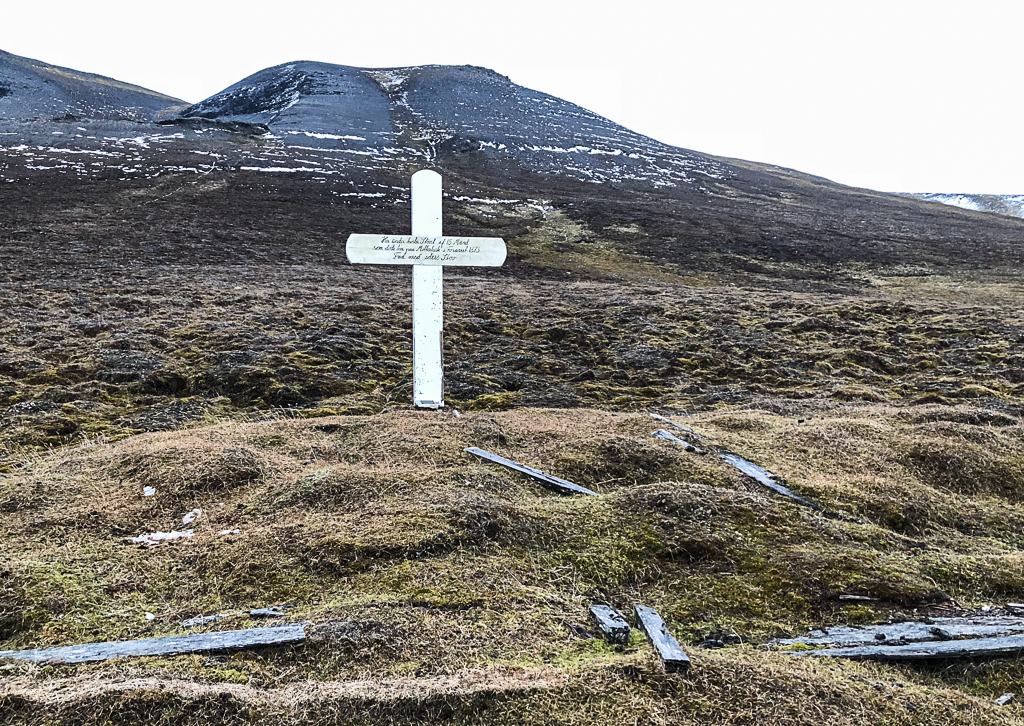 was blamed – at the time, scurvy was thought to be caused by laziness. In 2008, an archeology team excavated and tested tissue samples (bone) – they died of lead poisoning from heating the canned food in the tins. The first person to die was the oldest at 55 – he was the experienced hunter and Svalbard man who was expected to help keep the others alive. Once he was gone, the rest relied more upon canned food sealed with lead beads.

We had lunch – Offer offered his many snacks to the group (yay! And thank you!). We looked around and started back at 15:20. Sunset was at ~16:00. We hiked across the tundra along the riverbank to an easier place down and then up the other side, more tundra, another river. Rather than dropping back to the beach, we crossed the lower slopes of the crazy flat-topped mountain with the mudslides and rocks. In the second river bottom, I found a spectacular ammonite. 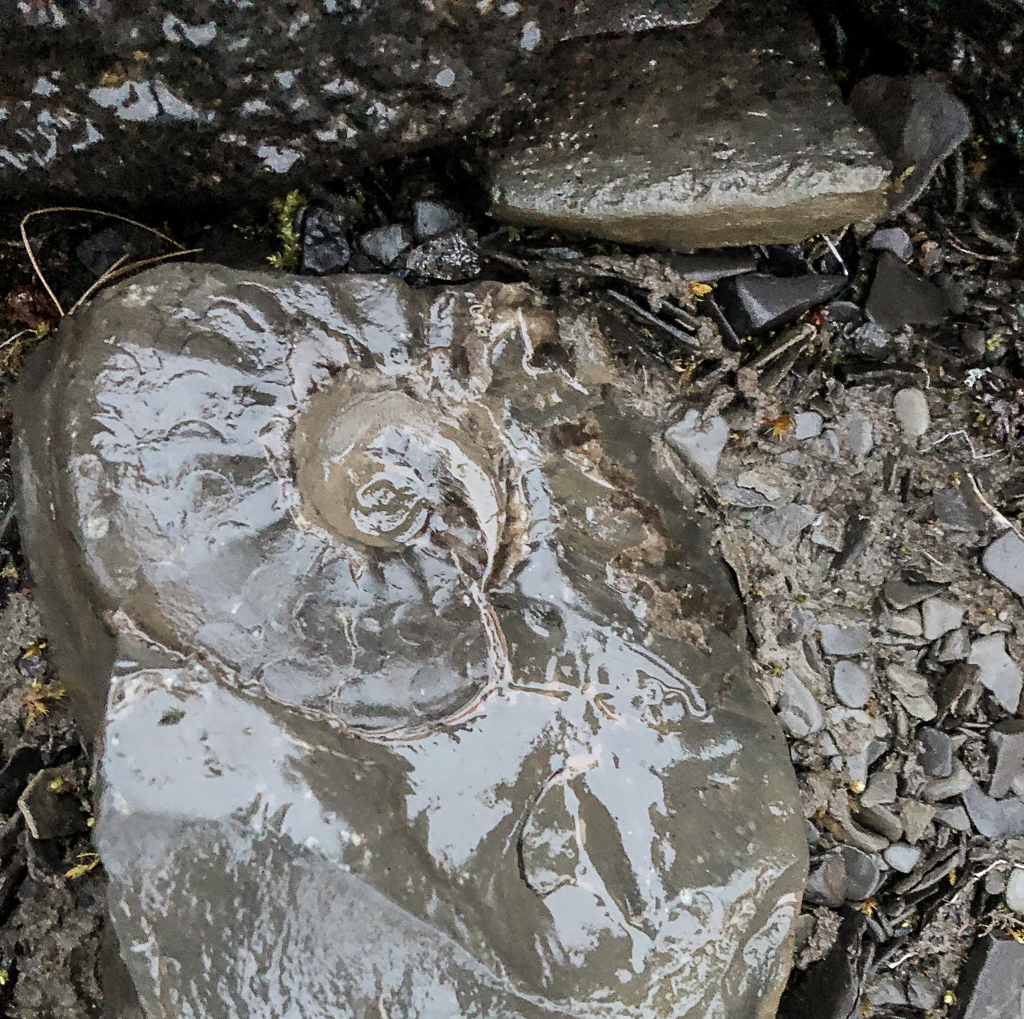 By this time, Lena, who has two collapsed disks in her back, was in pain. We picked our way across the mud slopes. It got darker and we went more slowly. It rained off and on, the wind came and went. We made our way to the beach, Mario and Åhsild were waiting at a lighthouse just up the coast [we learned this once we were within radio distance]. When we got to the beach, we had to cross another river. It was frozen in the morning when we crossed but now was wild, raging with ice and high current. Where it entered the ocean was the narrowest point, but the surf was high and washing back into the river. Sarah and Kristin decided they would carry everyone across. Crazy. I walked but was required to walk with them, one on either side. They carried each person with hiking boots or low boots. I didn’t show them mine. We moved down the beach a bit to a place with less swell.

[We loaded into the boat, one at a time, no hurry, single file in the surf.] The 14 of us, Mario and Åhsild, everyone and everything was offshore. We put Lena on the cold, wet floor, counted heads and started out. Before we went anywhere, Mario said, “Big wave coming, hold on.” Sarah, who was already wet through knelt at the front of the boat and held a light so we could see the water. 20–30 minutes later we were lifting onto the mid-deck. We were sent away as they helped Lena get out of the Zodiac and examined her. She spent the night in the captain’s cabin.

A bit of decompression. Everything was soaked and muddy. I hung what I could to dry and rinsed what I could to get the mud off. I had a hot shower and then, at ~2130, finally went up for dinner and a couple of honey/lemon grogs. Salmon, yum. Mario and Sarah both announced Lena was well and resting. I stayed and visited and relived everyone else’s epic adventure. Which felt much like any other day in the field.

Later, Mario sat at the table where I was sitting. He said in the morning, he took the Zodiac across to land and was chopping driftwood for a bonfire, when he had all the wood he wanted and was ready to load it into the boat, he discovered the Zodiac, with his flare gun and rifle, had floated away. He had an ax and the radio. At first, he thought to strip and swim but as the Zodiac moved farther away, he saw this flash of the ax and radio onshore and the captain floating naked near the Zodiac holding his rifle and flare gun.

“Antigua, Antigua, Marijn, Mario.” The Zodiac has an anchor, you know. Yes, I know.

And then, when he and Åhsild landed at the lighthouse they were hoping the beach was appropriate for a pick-up and climbed, with all of our lifejackets, up the bank. Realizing that meeting us there was impossible, they turned back to the water and found the Zodiac completely stranded on the beach. Mario, buying time, stalled, coiling line until a wave sort of put the boat back in the water. After they were once again on board and underway, Åhsild said, “Mario, should we put on our life jackets?” Oh, yes.

The Big Wave. We were all on board, Lena was stretched out on the bottom of the Zodiac. We were pushed offshore. Later, Mario, with a glass of scotch in hand told the story of the Monster Wave. He said, “I saw the wave and thought, ‘What the hell is that?’ Normally, you would turn along the edge of the wave and surf it. But because I was thinking ‘What the hell is that?’ I didn’t react in time and then had to do a different maneuver and gun the engine so the bow rose into it then you cut the engine so the stern rises again and balances out.” With scotch in hand, he told us about cutting wood, landing at the lighthouse, and the Monster Wave. And I said, “How is it, again, that you got the girl in your bed tonight?” He had a rather sheepish look and laughed.

Our adventure was much discussed as those who rarely venture into the outdoors express awe at the wild, the variability, and the prowess of the guides and crew. Lena said this morning that Sarah thanked her for making it back to the ship because the only other option was a helicopter.

We lifted anchor this morning and made our way back into Longyearbyen. Bus, internet, hotel, laundry, shower. Semi-real world tucked into a now-soggy brown industrial Arctic town. Sailing into town, I could see the mud mountain we skirted last night in the dark. It was dark and glowering.

There were reindeer herds, groups, individuals, all over the place yesterday. I found a dead reindeer, too. Short, round, and rolly-bodied beasts. No polar bears. 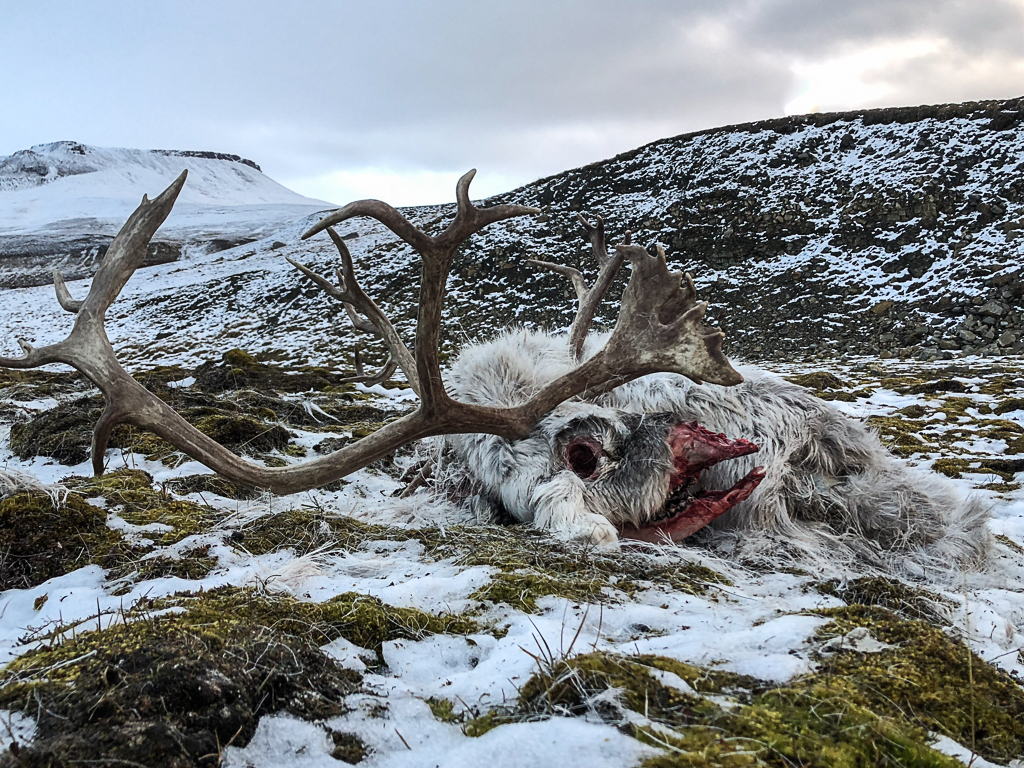