Bob Marley in my head

Often, when I feel pressed for time but have something I want to write, I leave notes in my journal, so I remember to flesh out the thoughts later. 10 October was one of those days, but I don’t think I adequately fill in the gaps here. What I do remember was standing on the bow of the boat surrounded by ice floes, brash ice, and pancake ice, alone, at 0100 hr., watching the northern lights play across the sky, the stars screaming brilliantly across the velvet blackness, and Bob Marley rolling through my head. Why would the Redemption Song fill my mind now?

“Emancipate yourselves from mental slavery; None but ourselves can free our minds” 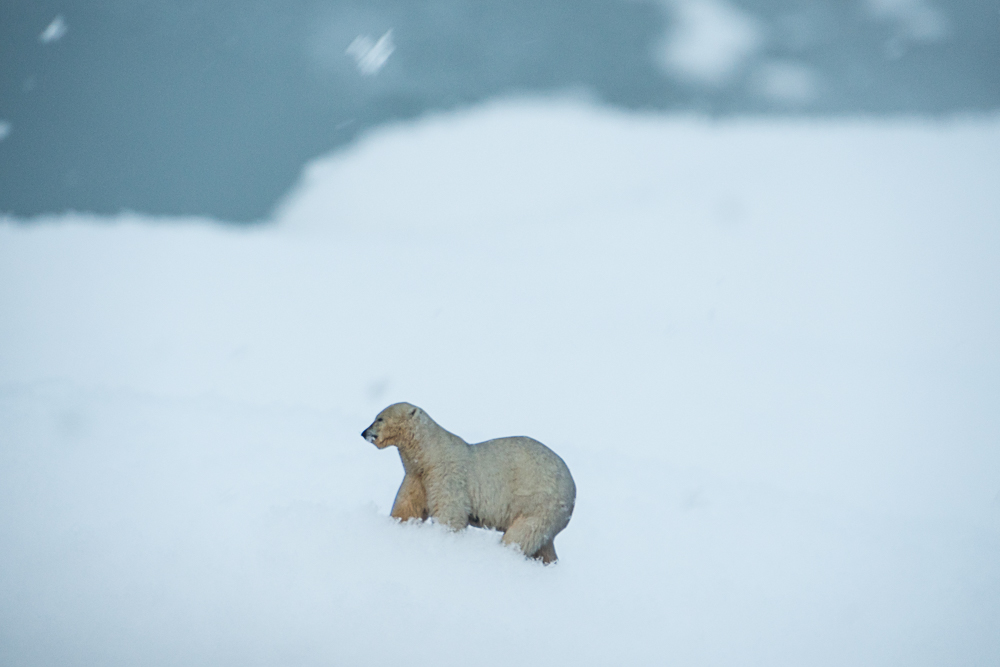 Our only polar bear sighting 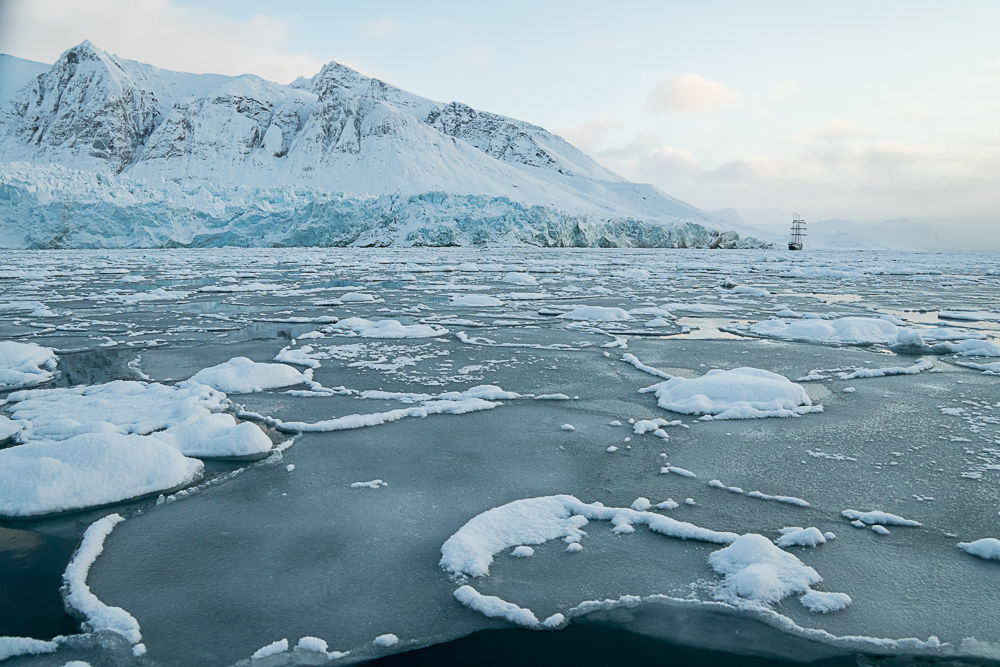 moving through the ice – pancake ice in the night

northern lights – green and white, pulsing, flowing, swirling, east to west across the south and above 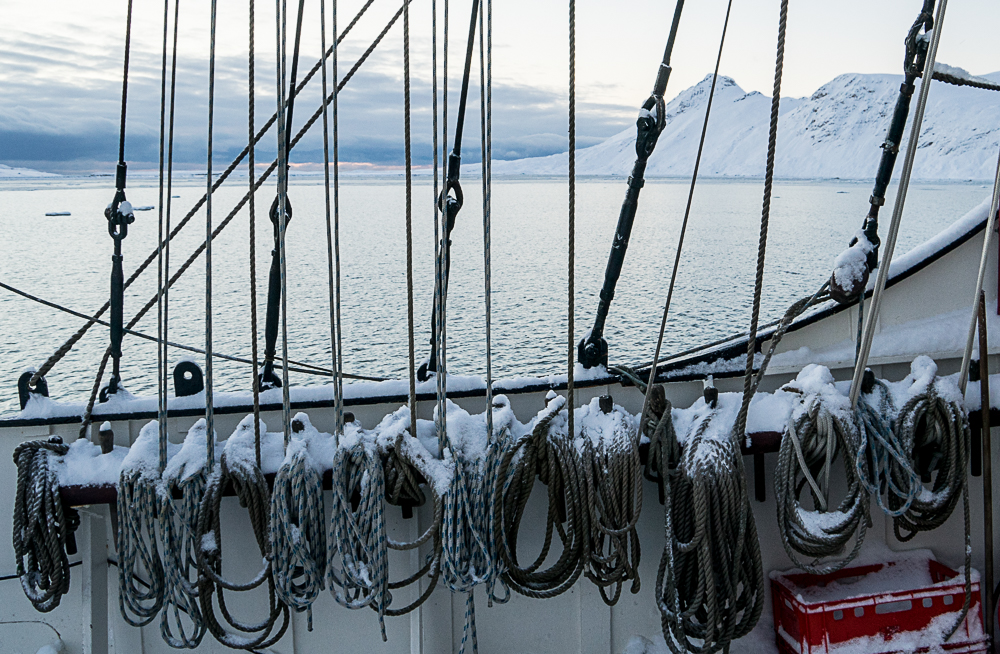 snow cave on island at glacier base

We’re in port. Shore leave for an evening, and this morning we do a tour of the town. Built for coal mining, it is now an international research station.

While sailing the other night, we were called out for the northern lights, which turned out to be minimal. I never went back to sleep. An hour or two later, we had dropped the sails and were running on the engine, through the ice. Brash sea ice that was in giant pancakes in the fjord. I finally looked out the porthole and had to go on deck. The ambient light was inconceivable. The ice was thick and as far as I could see in the night. At the bow, Marijn was using a torch to look for icebergs and glacier ice, directing the captain port and starboard, maneuvering through ice cautiously. As I watched, we came to a stop and dropped anchor.

The northern lights began again in full 180º glory. Green and white, they swirled and spun, waving curtains of light. I stood for an hour there, in the middle of the night, in the cold, and watched the lights and stars. It was spectacular. We were in Blomstrandbreen in Kongsfjorden. We were anchored between a glacier and an island. The island was named as a peninsula because the glacier connected it to the mainland and it was thought to be a tongue of land that reached into the fjord. As the glacier retreated, it was discovered the island was not attached. This happened recently and it has not yet been renamed as an island. 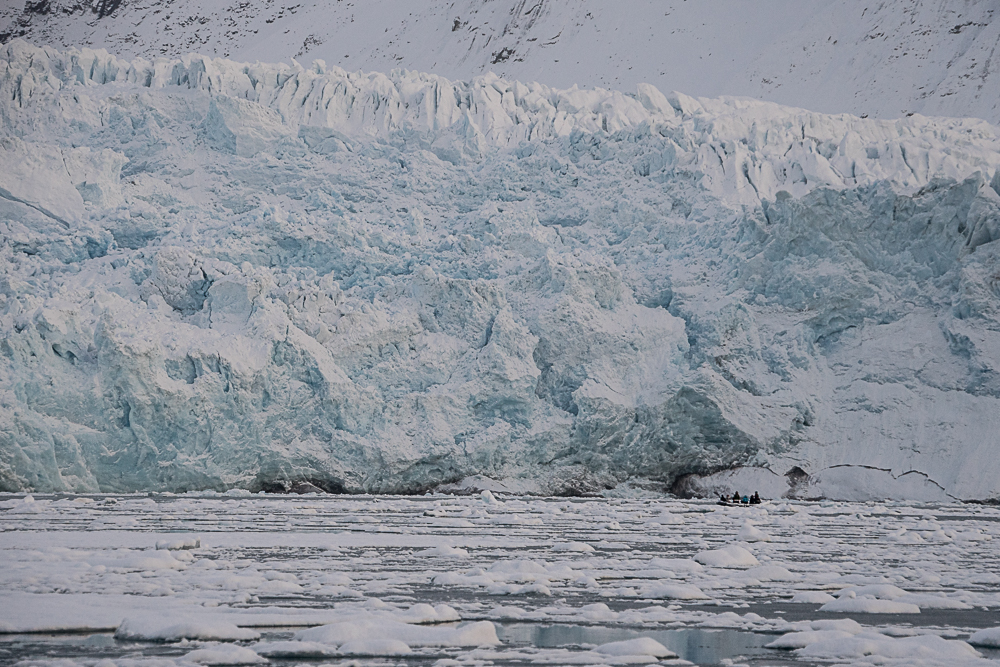 We did a Zodiac tour through the ice in the morning. Giant pancake ice with glacier ice blocks in between. The pancake seams were fusing and knitting. Slush on the surface and the first sea ice forming underneath. It snowed heavily for a while, Christmas snow, as Kristin said. Fluffy, white, giant snowflakes. Beautiful. Arctic silence. Another massive glacier, we were well away from the face, which we estimated at 80m high. I took photos of the other Zodiac, miniature, at the glacier base.

We moved to Ny-Ålesund for the night. 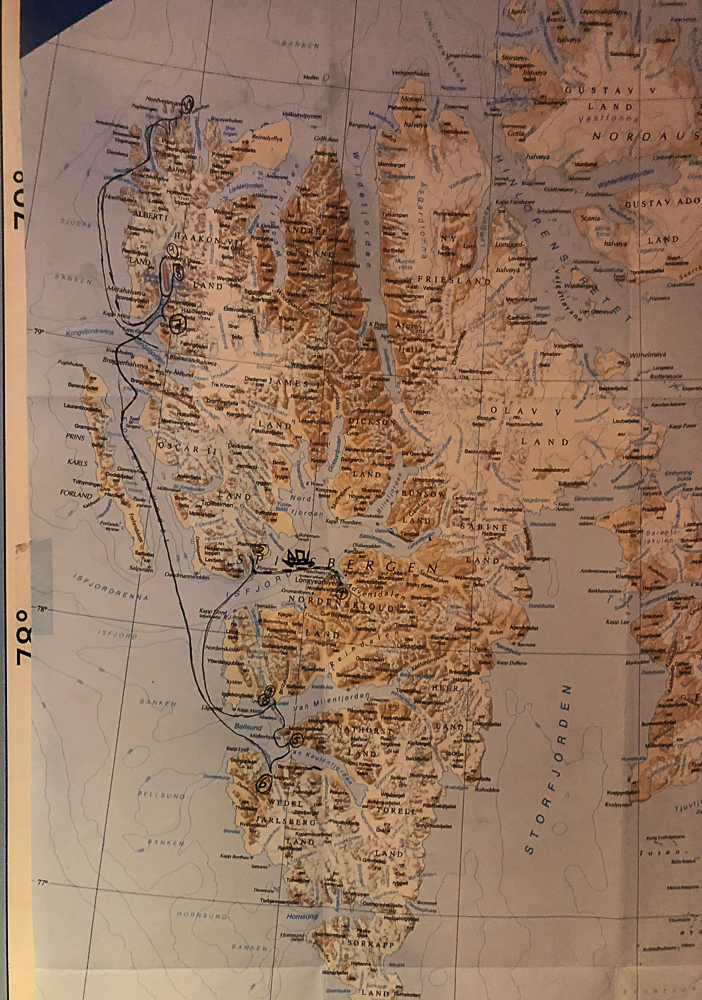