At the edge of the world

We motored out of Lilliehöökbreen that night [maybe the night of the 8th?], moving through the fjord while we had dinner and then onto the open ocean, cruising north at speed through the night. I went to bed ~2200 and was awakened at ~2330 for the aurora. Standing on deck in the dark, with a sky full of stars and the shimmering green lights of the aurora was stunning. Inky black, velvety cold. Seven satellites and a shooting star with colors curving across the southern horizon – waves of color in a line, southeast to southwest, with the most intense walls of light east and west. 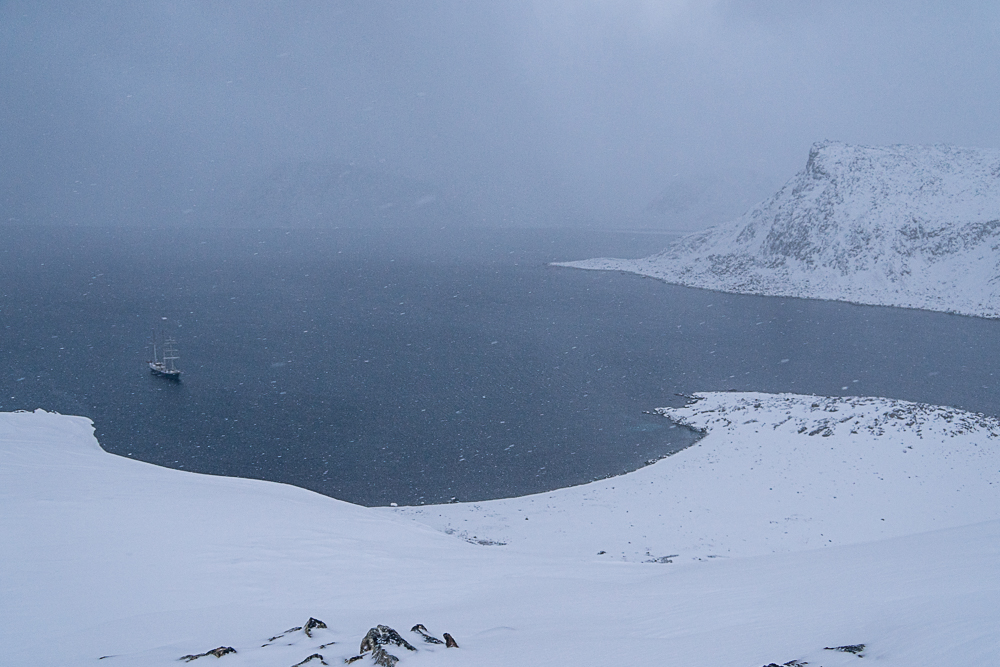 Antigua at anchor in Ytre Norskøy

When we woke yesterday morning, we were in Ytre Norskøy (~80ºN) – the northwestern tip of Spitsbergen. We were anchored between two islands in the corner of the archipelago with nothing between us and the North Pole, ~1,000 km north.

We landed and did a hike – up the ridge of the outer island. It was cold, windy, and snowing–pelting, horizontal, ice balls of snow. We got part way up but had to turn back and reroute. The snow was deep, and the landscape underneath was rocky. Rerouting, we wove our way up almost to the top. There is a modern, metal cross at the top. No one seems to know where it came from or who put it there. Kristin thought it was for the memory of the whalers. 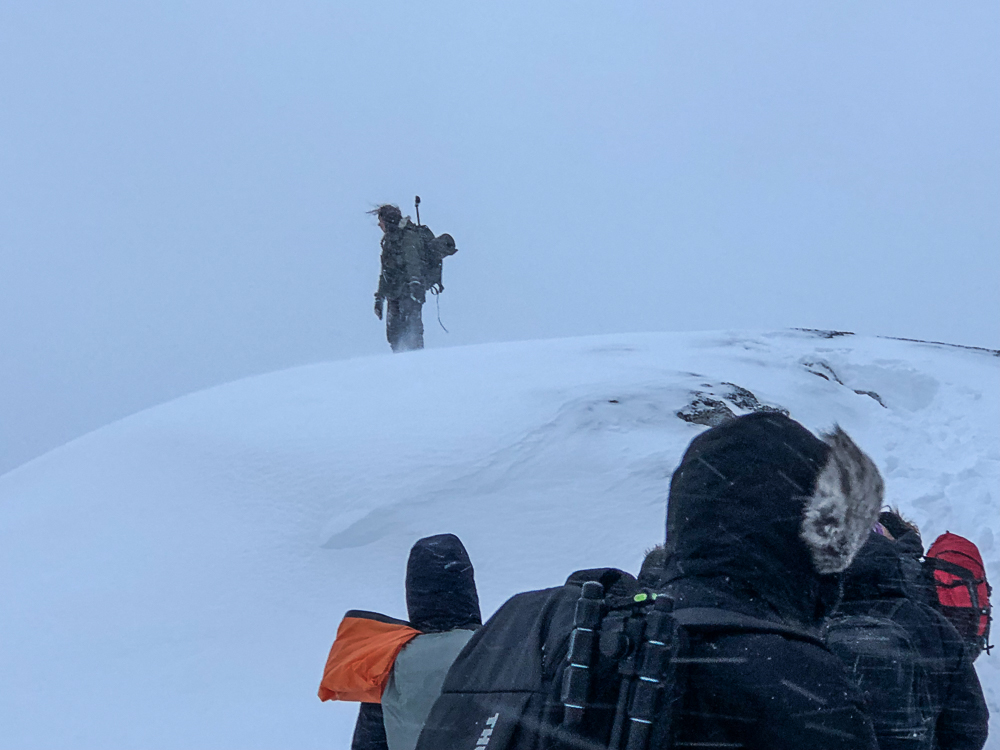 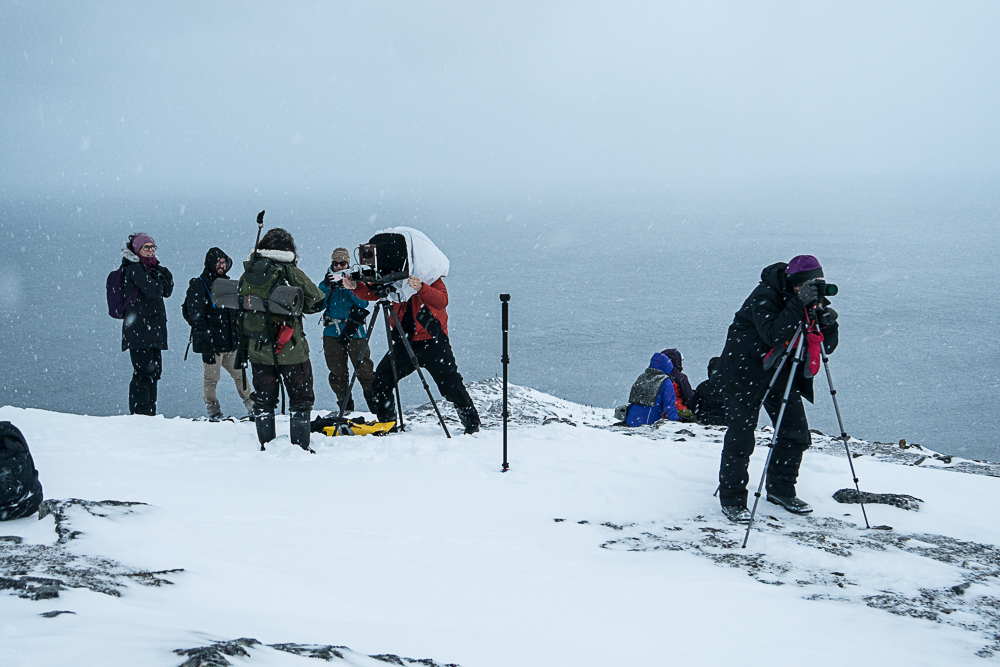 Another day at The Arctic Circle office

We moved the boat a short distance to another anchorage for the night, with a landing first. Few people dd the afternoon landing – most were tired, needed to work, didn’t want to go into the snow and cold. We had a static landing spot; big boulders and deep snow. I went waist-deep into a snow-well around a rock. Laughing, of course, and stuck. Extracting myself required a lot of floundering and flopping. 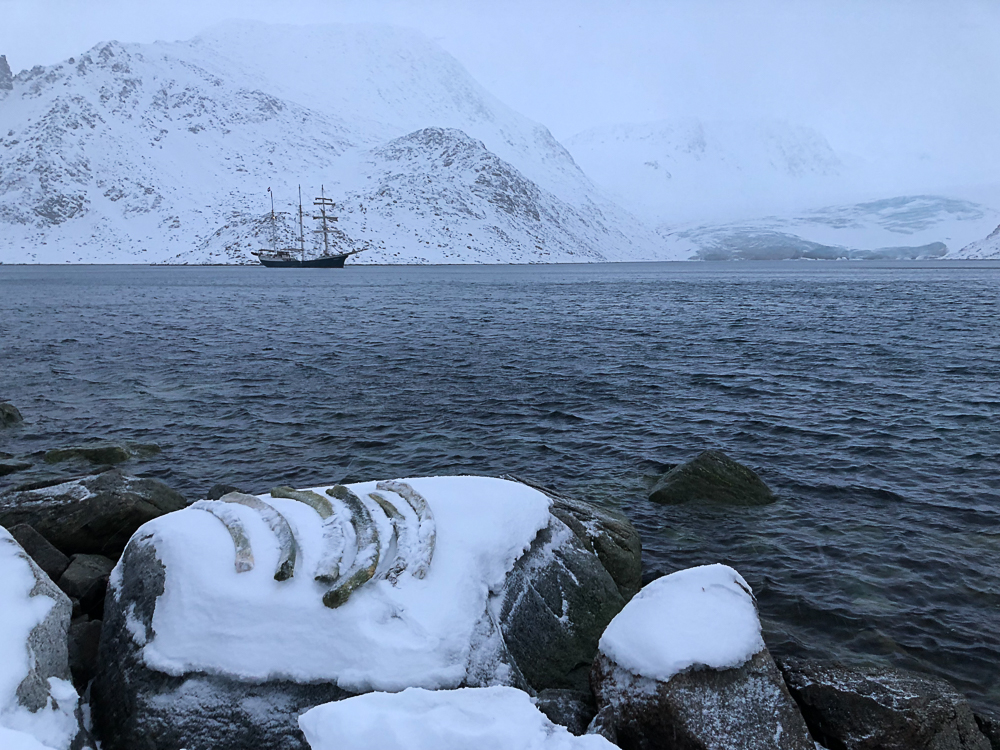 Whale ribs dug from the snow

Dropping back to the shoreline, I found six whale ribs in the rocks. I laid them out on a boulder in the snow to photograph before putting them back into the rocks. There was a jawbone, I think, too. An enormous length of bone – 3–4 meters, half-eaten, and chewed down and half in the water. Sarah said a whale had washed up there a year or two ago and that the bears had been scavenging. But I showed her that the ribs were cleanly sawed. It is illegal for humans to disturb carcasses. 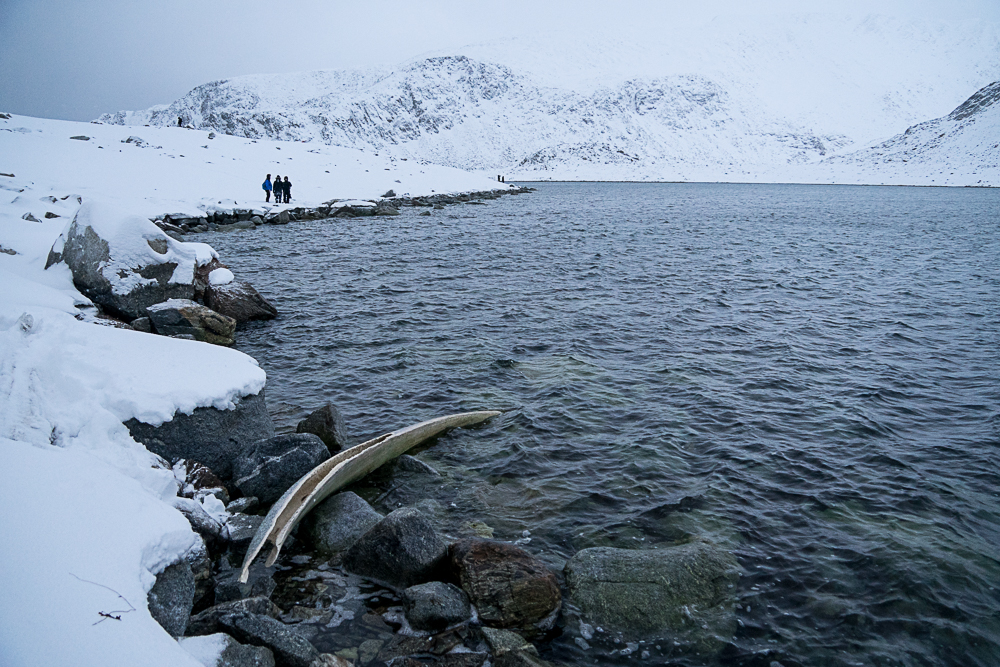 I’m struggling to put together some photos for a presentation. The new computer has few photos and all of my recent essays are on the blog site – I haven’t kept any on the computer. And what is interesting to this group?

We had presentations again last night. Kim, the weaver, uses scientific data to create patterns – like the incarceration and recidivism rate of kids, ice mass of Greenland over time, and the shape and size of a glacier in Alaska, over several panels and 40 years. Going, going, gone. Nora does performance art and sings – amazing work. More intimidation. Carson read the opening monologue of her new play. Dawn showed some of her documentary about an Australian ballet dancer set for the international stage who was randomly knifed in the face. The attacker was never found, and 18 years later, the woman continues to work through the trauma. Intimidating bodies of work and intellects behind them. 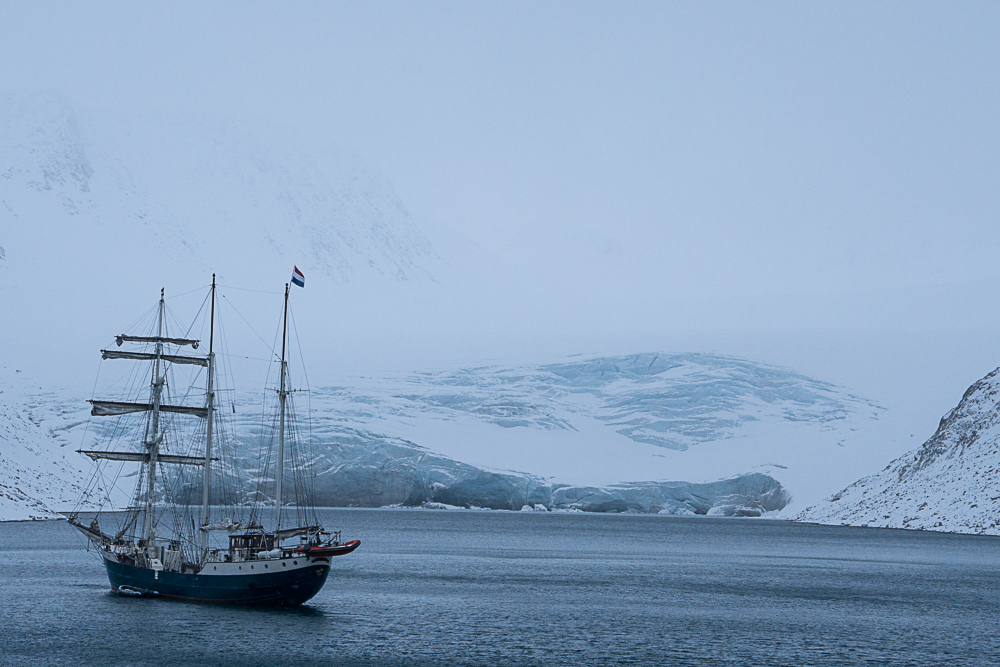 The blue tongue of a glacier behind Antigua

Yesterday’s second landing was across Lilliehöökbreen. Behind the ship was another glacier, a giant blue tongue, a sleeping goanna, along the water’s edge, and one smooth surface of blue ice.

Lena said last night that for the past 18 months, life was geared toward this trip. I, too, have been that way and when we return? Nothing planned, scheduled, or aligned.

Island landing in Fluglefjorden – I built a snow cave and curled into a ball inside.