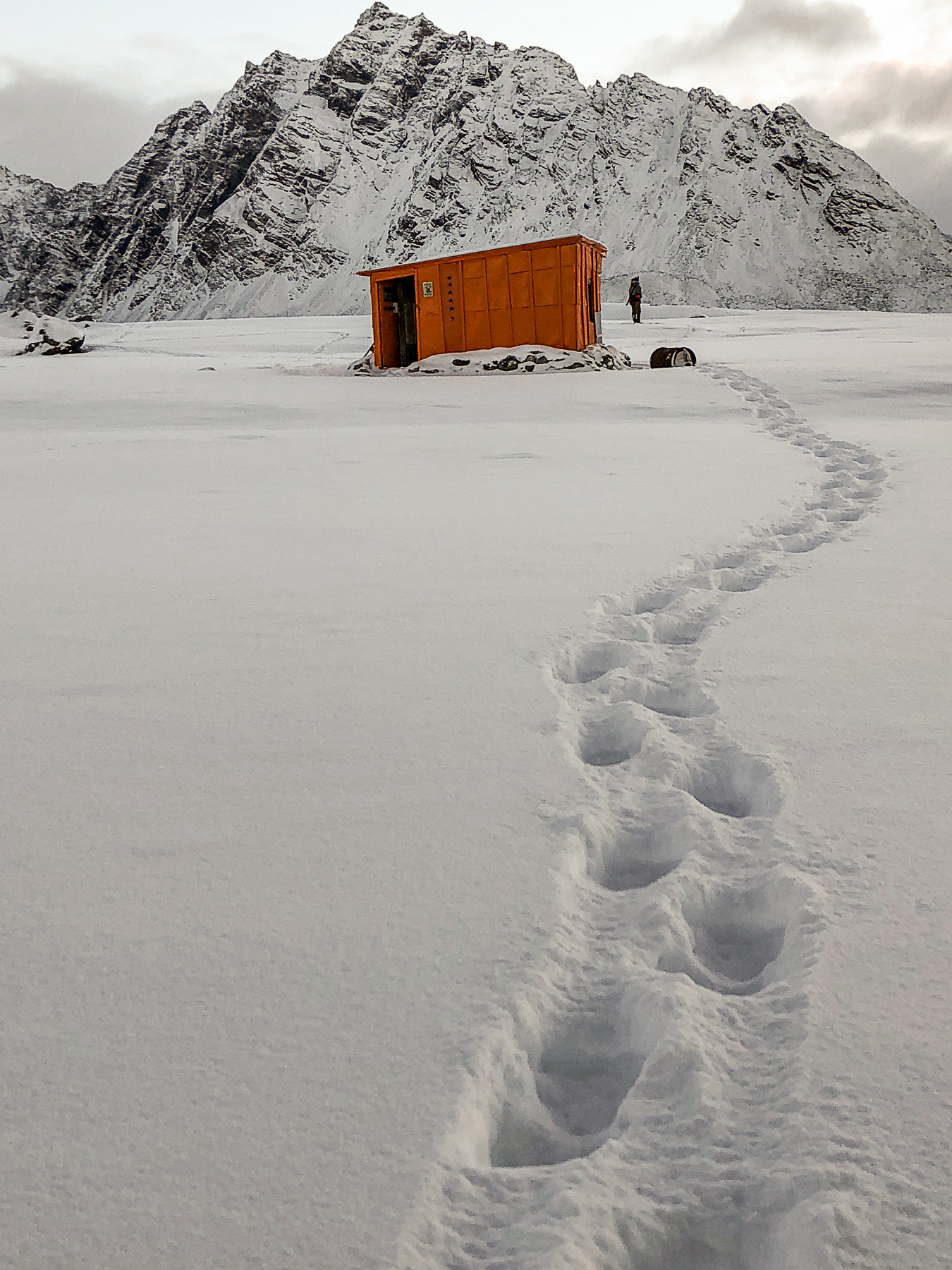 We moved the other night, from the beach with the sand and glacier cubes to the north into another fjord. Anchoring on one side of Lloyd’s Hotel (Möllerfjorden), we did a landing in the morning. [The grandly named Lloyd’s Hotel is a well-used cabin that appears to be heavily influenced by the Jim Morrison Paris memorial-type crowd. Open to anyone who happens upon it, it has collected random memorabilia from those passing through. A polar bear had recently visited the cabin. There were tracks directly to, around, and right up against the building. The bear must have stood on its hind legs to look at the roof – but I can’t say if it left any tokens.] We crossed the peninsula on foot into the other arm of the fjord (Krossfjorden). Coming through a pass, we hiked onto the ridge above the glacial valley (Lilliehöökbreen) and above Antigua, which had moved around the peninsula. 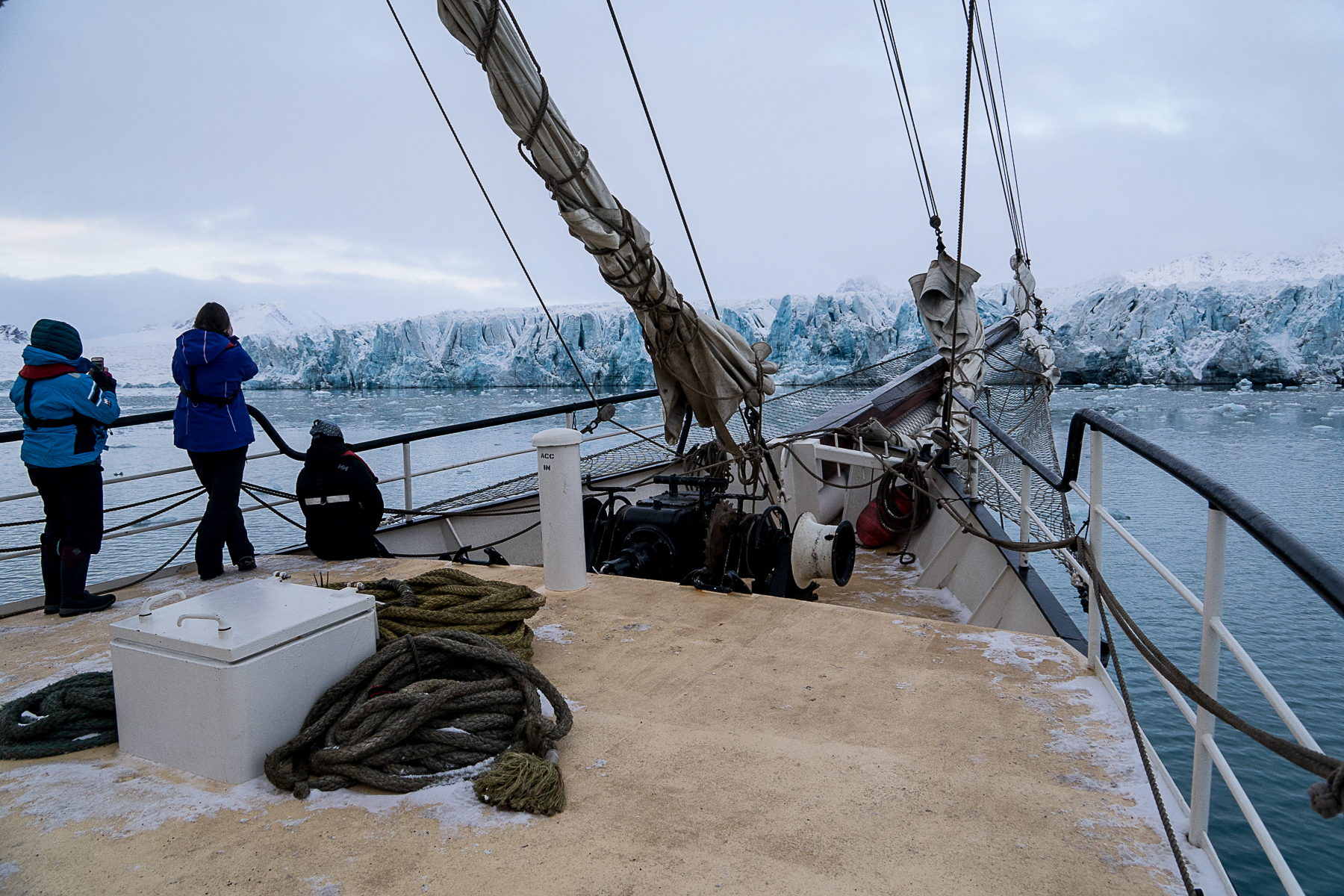 Across Antigua’s deck to Lilliehöökbreen.

When we came into view of Antigua, she was doing depth soundings in uncharted waters. The glacier once filled the bay. Now, as it retreats, it has melted far enough back to split into two glaciers where the mountains above the bay divide it. The foot of the glacier used to be a united face that met the water’s edge. The head of the fjord is a pan of glacier; mountain top knobs stand above and between the ice fields creating the same effect as a braided stream, many sources twining together and apart again. In this case, rivers of ice flowing around the mountains, each with a different mountain top source, met at the foot and combined into an expansive glacial face. Now, the single glacier front has moved back far enough to be two narrower glaciers split by the mountain ridges and flowing into the new bay. The uncharted water depth was variable, as little as 4 m – the ship’s draft is 3.2m.

In the Zodiac, we wandered through the ice pack, looking at the glacier. It calved regularly and rumbled like thunder. A tiny ringed seal came right to the boat, diving around and under the Zodiac repeatedly, watching us for 20–30 minutes. Kristin and Åhsild said seals never did this.

Christina did salt words – “longing” to “belonging” and “surge” on the bow of the Zodiac. We floated; we did a minute of silence to hear and believe. The walls towered above us, blue and white, black and gray, ice blue, and aquamarine. The surface water was full of ice floes, bergie bits, and pancake ice, congealing and spinning. 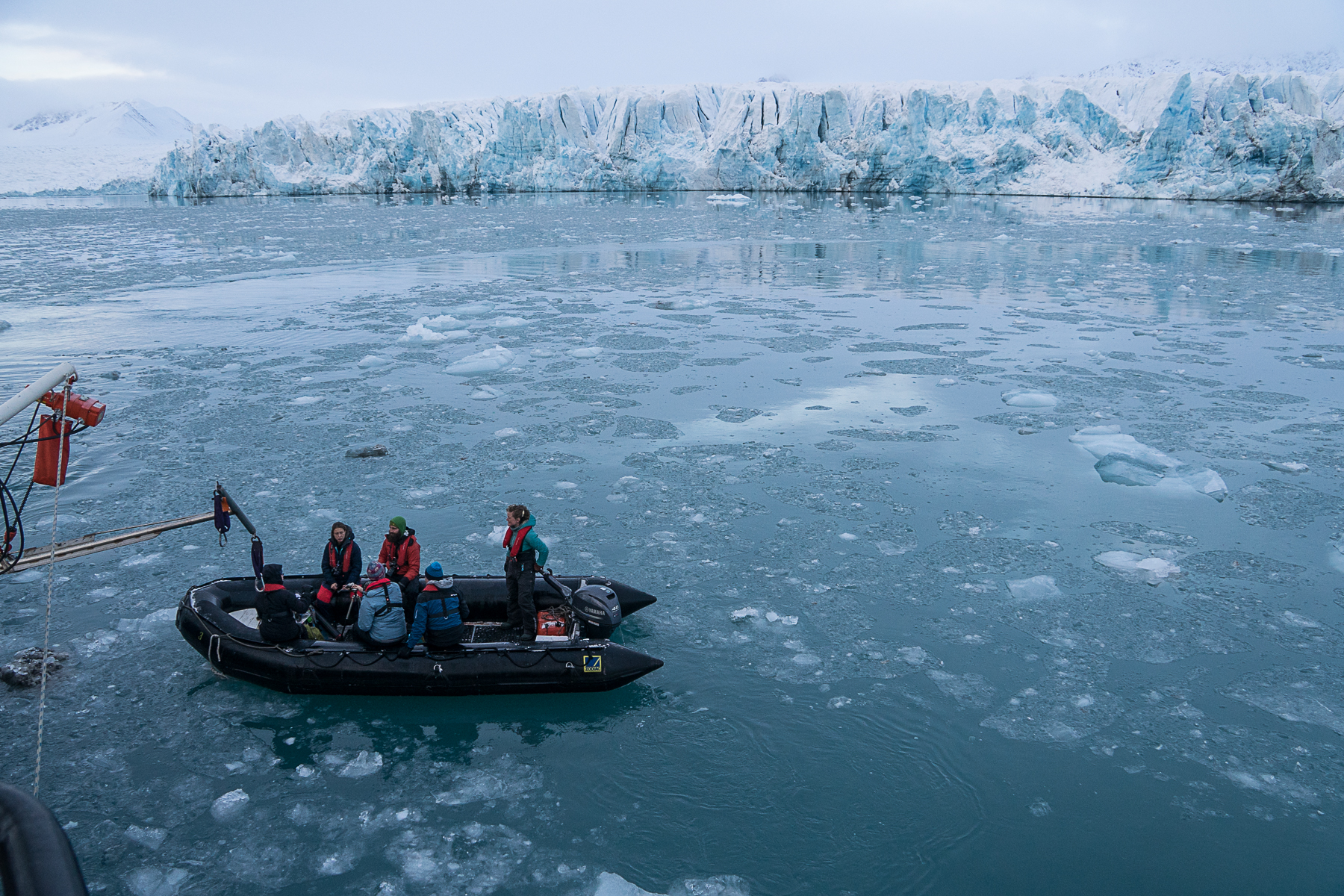 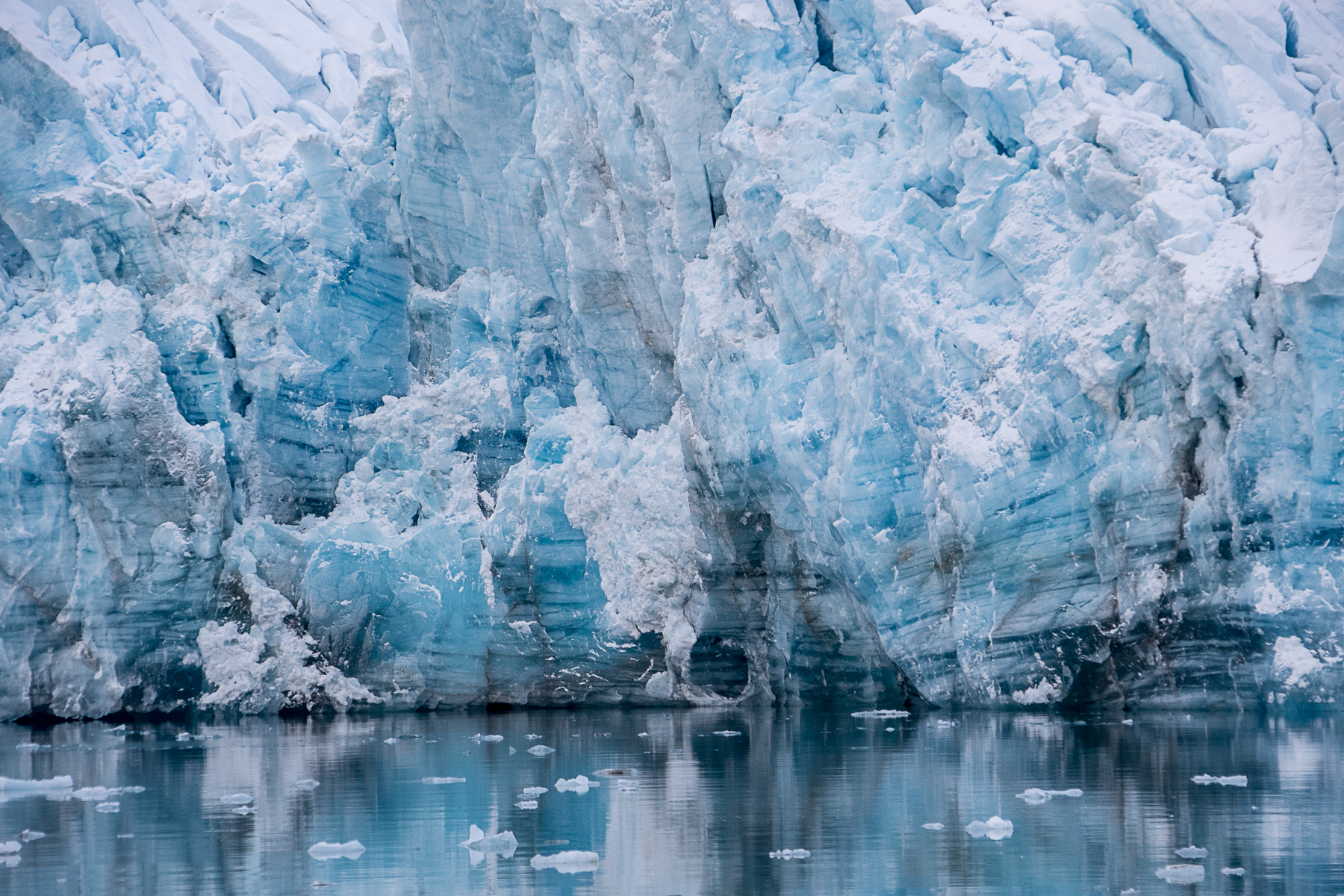 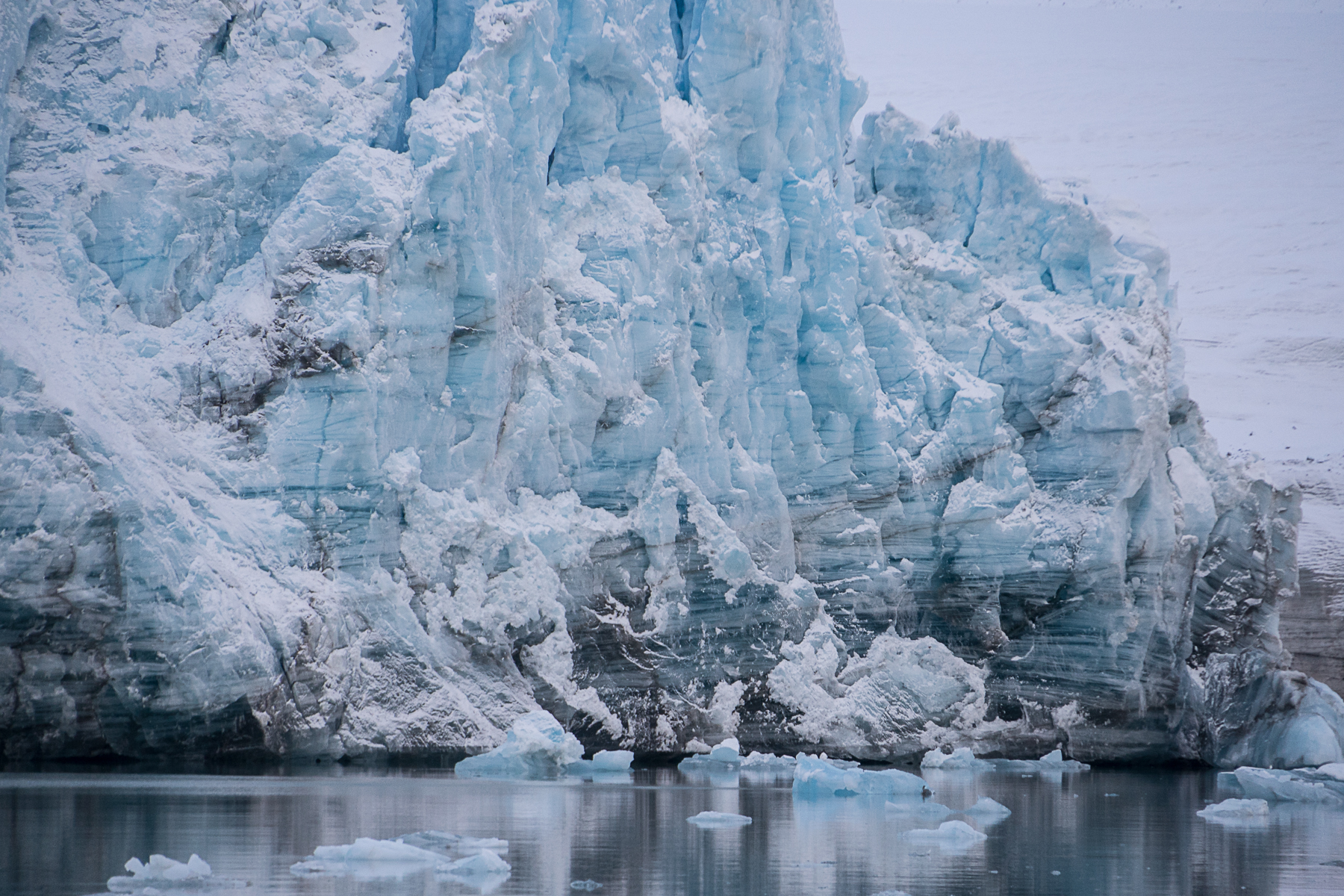 Antigua depth sounding at the foot of Lilliehöökbreen.