What should we do about Ralph Northam and other former racists?

Virginia Gov. Ralph Northam fucked up when he was a young man. And now the debate raging is whether or not he ought to resign.

I grew up in the deeply racist rural working-class South in the ’60s and ’70s and everyone was a bigot. The N-word was just the regular old word for black person. My grandfather would sit and bitch at the TV anytime a black actor appeared – “they just have to be on everything these days, don’t they?” There was some suspicion his father had been in the Klan, but “it wasn’t racist – they just went around trying to help people out.”

Donald Trump pulled 73.4% of the county’s presidential vote in 2016, so not much has changed, apparently.

I didn’t know there was any other way (although it sometimes felt not quite right, even when I was six years old). So I used that bad word, I told racist jokes, I internalized the assumption that non-whites were inferior and in most ways went about being a fairly typical Southern kid.

I’m horribly embarrassed by every second of it and I’ve written about what I consider my most shameful moment growing up. I regret I never got to apologize face to face.

Bottom line, if I were a public figure there are things in my past that would threaten my reputation if revealed, so I may have a slight grasp on where the governor is right now.

Do I think Northam should resign?

In this (and any similar situation) I tend to look at the following criteria.

If I apologized for that awful moment when I was in high school, but a review of my life in the 40 years since didn’t indicate I’d taken it to heart and done anything about it, how much credibility would I have? I like to hope four decades of conversations about Civil Rights, years of being an instructor and professor willing to tackle these issues head-on and more than a decade writing about the issue here at S&R have exerted at least a little influence on those who have come into contact with me. I haven’t done enough and I never will, but I keep up the campaign. 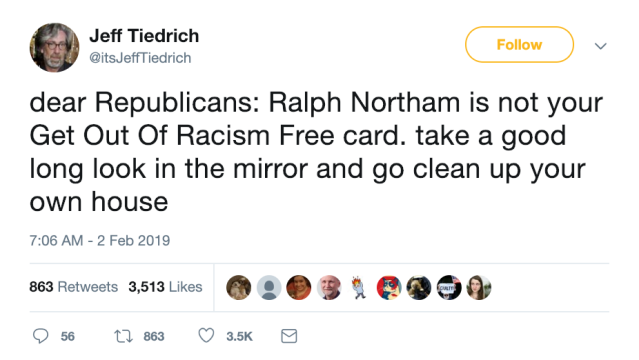 I don’t know Gov. Northam, but what I read suggests he’s lived a public life consistent with pro-Civil Rights beliefs and that as an office holder his policies have sought to benefit America’s minorities. In other words, he reformed. By his deeds we know him, and what we know is that he isn’t the young man in blackface anymore.

His career stands in stark contrast to many in the partisan opposition, who seem to think that ugly photograph is a “get out of racism free card.” By their fruits we know them, as well.

In other words, if all I have heard and read is accurate, I do not think Gov. Northam should resign. If more evidence emerges making clear he has been less than 100% forthcoming – ie, has he told the whole truth regarding other potential cases of racist behavior in his life? – then we’ll need to revisit the subject.

I don’t feel like anything I’m saying here is especially wise or insightful. From where I sit everything I’ve written is, or ought to be, obvious to a moral, ethical human being in a civil society.

Let’s all live like we’ve got some sense, then, shall we?