To the kid in the MAGA cap 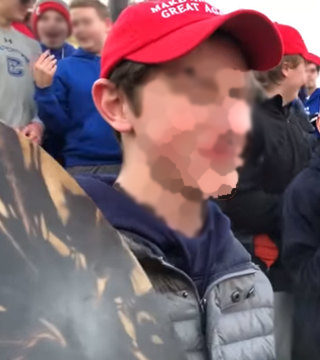 Yes, you. You know exactly who you are. So do your friends, teachers, and parents.

Maybe this morning you still think that’s cool. Maybe you’re waiting for the interview requests to roll in. Are your Instagram followers mushrooming? This is what Andy Warhol called your “15 minutes of fame” (I put a link to Wikipedia to save you the trouble).

I taught in Catholic and Episcopal schools for many years, but I don’t anymore. So I can write a few things that your teachers can’t.

Kid, you screwed up. Bigly. There will be consequences for what you did. More than you think.

Someone claiming to be your mom defended your actions on “Black Muslims.” Now, maybe that person was really your mom and maybe not. Maybe your parents will defend your disrespectful defiance with every fiber of their being. Maybe they’ll get invited to interviews with Sean Hannity and Rush Limbaugh. I’d like to think “that’s not how your parents raised you.” But maybe they did. I’ve know quite a few parents who raised their kids in their own rude, self-centered image. Or, as one teacher put it, “The apple doesn’t fall far from the tree. Assholes breed assholes.”

Oh, that teacher? She taught theology (that’s religion, in case you don’t know the big word.).

But I’m really hoping that your parents are like most of the private school parents that I knew: really busy, reasonably successful, and hoping to provide a good education for their kids. Some of them actually cared about values and morals. Those are the sorts of parents who were always appalled when their kids screwed up: got caught with cigarettes or drugs, drunk at prom, cheated on a big assignment. Sometimes they were so embarrassed at the actions of their offspring that they called in to say they were withdrawing their child from school and the whole family sort of disappeared. The really brave ones showed up in person to apologize, sometimes dragging a tearful son or daughter along on whom the seriousness of the mistake had been impressed.

Because here’s the thing: your parents may have to face consequences for your actions. Maybe all their friends, co-workers, and employers will also support your ignorant action–but I doubt it. My guess is that there will be people who recognized you and will now be figuring out how to get as far away from your parents as possible.

Ditto for your extended family.

There will also be consequences for your teachers and other adults at Covington Catholic High School. My guess, based on my experience, is that your behavior did not come as a surprise to many of them. Some of those adults may now be considering other career choices for themselves. Some of the adults may be trying to figure out who should be blamed for your behavior on the “field trip.”

I noticed in the video that there were not any adults in sight. So where were they? Why were you not supervised when almost 500 miles from home? Who was supposed to be keeping an eye on you and where were they? Those adults will probably find themselves unemployed in the very near future. Their names will probably make the news and they may have a hard time finding another job. Kid, I’m not blaming you completely for that, they chose to let you run wild, that choice is on them.

Was your principal on the trip? Assistant principal? School chaplain? Yeah? Say goodbye to them, too. Heads will roll. They’ll have to. You created a public relations nightmare, the adults will have to clean it up. The communications director posted that “Message from the Diocese of Covington and Covington Catholic High School” to buy some time:

We condemn the actions of the Covington Catholic High School students towards Nathan Phillips specifically, and Native Americans in general, Jan. 18, after the March for Life, in Washington, D.C. We extend our deepest apologies to Mr. Phillips. This behavior is opposed to the Church’s teachings on the dignity and respect of the human person.

The matter is being investigated and we will take appropriate action, up to and including expulsion. We know this incident also has tainted the entire witness of the March for Life and express our most sincere apologies to all those who attended the March and all those who support the pro-life movement.

The Diocese of Covington and Covington Catholic High School

Before the adults at your school who are deemed responsible (or irresponsible, as the case may be) get fired, resign, or take whatever punishment that is meted out to them, they’ll have to figure out what to do with you.

Now, Kid, I know you were not the only one in that crowd. The others will probably be identified and various levels of punishment doled out. Undoubtedly some of the young men in the video will be withdrawn from school by their horrified parents. At least I hope some of the parents fall into that category. There are always parents who are left mystified and appalled by the behavior of their kids: the shy girl who ends up pregnant, the studious boy who cheated on his final exam and got caught. Some parents really try hard to raise good kids and the kids, it turns out, are not all right.

Kid, if you have not already been expelled, or counseled to withdraw, you will be. You and your parents could fight the punishment–I’ve seen that happen (successfully, actually). But I’m guessing you won’t be at school on Tuesday.

Your parents will have to find a new school for you. Maybe they’ll consider “punishing” you by sending you to public school. I hope not. Not for your sake, but for the sake of the public school that would have to figure out what to do with you. More likely, your parents will try to find another private school in the area that will take you. If your family has enough money for full tuition or you’re a talented enough athlete, that might happen. But my guess is that it’s going to be more difficult. You may be just the latest kid shipped off to a remote boarding or military school that specializes in working with “troubled young men.”

Kid, I’m guessing that you’re a sophomore. You might be a freshman, but they don’t usually have enough guts for that sort of stunt (fortunately). Most of the kids I’ve seen get in real trouble do it when they are sophomores. And most are male. A woman I taught with called it “testosterone poisoning.” She came up with the theory based on the behavior of her two sons (who eventually turned out OK). Roughly, the theory holds that stupidity is geometric and multiplied by the number of males present. One young male by himself is least likely to do something stupid. Add in his best friend and double the likelihood. Put them in the car with two other guys, kiss all reason goodbye. Kid, you were surrounded by cheering, smirking, chanting classmates. It was a stupidity-rich environment and you thrived in it.

But underclassmen? They don’t usually stop to think about the consequences of their actions. You know who does, Kid? College admissions people. Maybe you weren’t planning on going to college–but I’m betting you were (that’s why your parents were forking over the $8 grand a year in tuition). Every admissions person in the country has seen your grinning face. I’m not using your name here, but it will hit the news. And some admissions people will file away your name and picture in their “Be on the Lookout” file in their bottom drawer.

Which brings me to Led Zeppelin. Kid, in the immortal words of Robert Plant, “there are two paths you can go by, but in the long run, there’s still time to change the road you’re on.” That’s “Stairway to Heaven,” in case you don’t recognize it.

First off, you can try to brave it out and do your best to become the poster boy for the next generation of the Alt-Right. Even if that is not what you choose, they will use your image for their own purposes for a very long time. It’s important that you understand that. Maybe you like that idea, maybe that was your goal. I’m guessing that you never considered it.

The second option is that you could wake up this week, or maybe you already have, and realize that you screwed up and you could try to work to make amends. That doesn’t happen often. I taught at one school where we called the last resort meeting with a student and his/her parents the “Come to Jesus Meeting.” The meetings didn’t often result in the student making a big change. But sometimes it happened.

Kid, I imagine that you know what the words “Vietnam Veteran” and “Native American” mean. Maybe you didn’t know the phrase “Indigenous People.” I’m hoping you know what all of those things mean now. If not, find out. Make understanding why what you did was so offensive and wrong and resolve to not make that mistake again.

If you take the second path and are successful and actually learn from this and turn over the proverbial leaf, it might make a convincing and successful college admissions essay.

Here’s the thing, Kid. Teachers see a lot of kids with patterns of Bad Behavior excused and passed on. It doesn’t just happen at private schools, but some private schools are more motivated to keep kids around even when their behavior does not warrant it. And seeing that Special Treatment can be demoralizing for faculty and staff. My guess is that you don’t care about that–you may even find it funny that you could flaunt your transgressions in your teachers’ faces with impunity.

The fact that you caused such a public problem for your private school will probably result in your being removed. Some of the adults who remain will breathe a sigh of relief. They will all have to come to grips with what what you did and what role they might have played in allowing your behavior to escalate to the point that it did.

But you, Kid? Your time for wrestling with your flagrant disrespect is just beginning. I hope you are strong enough to get through this and become a better human being.

Experience tells me that growth of that sort is highly unlikely for you. But I will still hold on to a tiny hope that I am wrong.