Who is Turning Point USA and what is Kurt Russell afraid to say?

You may have seen this one on your social media lately. 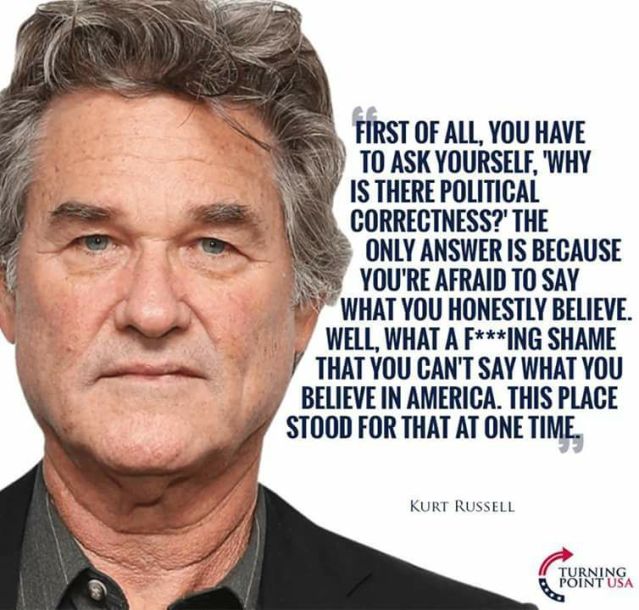 There are multiple things here that I wonder about.

First, see that little logo at the bottom? Here’s a larger version:

I’m not going to preach here. I’m just going to ask you go read about them and to think about their credibility as a source. Do they reflect your values?

I hate to be the sort to dismiss things out of hand, but TPUSA has worked hard to cultivate their brand. I’m a big believer of the adage that when people tell you who they are you should listen.

The second issue is the idea under attack. As a rule, any time you hear someone bitching about “political correctness” you’re probably not hearing what they really mean. Kurt asks “why is there political correctness?” But that isn’t a mystery – we know where it comes from. The term is a creation of the far right and was developed to suppress criticism of racist, sexist and other forms of discriminatory speech.

More critically, though, what precisely is this speech that can’t be safely uttered? Specifically, what is Kurt Russell afraid to say? Think about those you know of who complain about political correctness – what do they seem to be afraid to say out loud?

It feels like a lot of people are very comfortable saying what’s on their minds since the last election. Is that what he’s talking about?

Does it bother you?