The grim and the glorious – the days of August on Cooper

Part 23, the dog days of summer 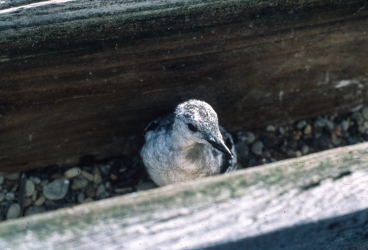 A Black Guillemot chick ready to fledge. When the chicks are ready to leave the nest, they simply walk away; they go to the water to hone their diving and flying skills.

What a grim day. I went through the whole colony, nest site by nest site. There are many dead and dying chicks; many are moving around – finding, or trying to find, new homes where they will be better fed. The disappearance of so many chicks also reduces the number of adults in the colony since they won’t return to empty nests.

Somewhere around 1300, the day became spectacular. I’m so used to putting my head down and going along with whatever the weather is that I didn’t see the clouds lift or the glorious blue sky appear. It’s been here the whole afternoon and evening. It’s about 2330 now; the sun is setting immediately in front of the tent. It is getting cold, the mild afternoon and evening have passed. Oh, that the rest of August was like this… I tried to radio Dave at 1630 or so thinking I would invite him out for dinner while the boating was good, but I couldn’t raise him on the radio. What would I have made that would be worthy of a dinner party, anyway?

After dinner, I cleaned out and reset George’s tent. What a disgusting mess – though I’m not sure how much the storm contributed to that versus George’s indifference to sand. I also threw out some of the ten-year-old canned food and rice and pasta from last century. Hmmmm. Funny. That saying doesn’t hold as much weight as it did last year. I may end up being stuck here and regretting that move, but I doubt it. It was gross.

I finished Memoirs of a Geisha. I think I will move on to Sophocles now.

Yesterday, I found a stunning juvenile tern that didn’t survive the storm. It was lying on the ground in a frost heave. Exquisite, except for some sand in its feathers, it was perfect. The wings are magnificent, long and sleek. If I could choose my totem animal, it would be the Arctic tern. They are pure effortless energy, and I envy their grace and fluidity. I strive for such beauty of motion and life. I wonder if this is the same tern I flushed the day of the storm? Not strong enough to fly into the wind and not old enough to survive without its parents feeding it for several days. It’s a tenuous life, and the parents’ reproductive energy goes wasted this summer. How often are the adults left with nothing to show for their epic migrations and summer’s labor?

What an absolutely glorious day. The wind was rocking out of the ENE all day, but the sky was blue, clear, and gorgeous. The edge of a front is hanging directly over the island and has been there most of the day; I stayed on the sunny side. How wonderful it would be if this weather continued for a few days (I’ve probably just cursed myself). It’s 2200 hrs, and the sun is sliding toward the ocean, its glow fills my tent with light. I almost don’t want to sleep for fear of missing any of this blueness.

When I got to the east end of the colony this afternoon, I kept walking east, all the way to the barge. It didn’t seem nearly so far today as it did the first time I went there. The skinny little strip of land holding it all together is getting lower and was heavily washed over in the last storm. I found an incredible whale vertebra a long way down and carried it back by balancing it on my head – practicing better posture and weight-bearing skills. I left it at the 97 barrels, too tuckered to lug it the rest of the way back. I’ll move it when checking nests.

Today was not quite so grim as yesterday. There were plenty of dead chicks, but some began to gain weight again and looked more alert. They still grabbed at my fingers and begged for food. A number also walked away from their nests, as they do. There were several that jumped out of reach and walked away from me before I was able to catch them for weighing. If I didn’t have them in hand quickly, they were gone, and I had no compunction about letting the poor buggers go to find whatever better chances as they could.  The Jaegers were in the colony again and were relentless. It will be interesting to see who actually survives this ordeal.

George commented on the radio the other day that there was no need for him to come back to Cooper this summer if everybody is dead or dying.

I watched the sunset last night at 2356-ish – I can’t remember the last time I saw the sunset over the ocean. There were no clouds, just a giant ball of light sinking into sand and water. I won’t make it tonight; it was a long, tiring walk in the sand with a whale vertebra on my head.

It is dusk now. The cloudy western edge is stealing away some of the last light, and the land is lying in shadow. The cloud front falters and breaks over Cooper; it is still and blue above.

Another gorgeous day, even better than yesterday because there was almost NO WIND! During radio call this morning I was told to batten down in anticipation of a gale from the south. I dutifully dead-manned the rest of the fly lines and packed up as much of the camp as I could.

I set off early to do chick weights expecting the wind to come up at any moment. I walked across the tundra, moved the whale vertebra back to camp. Lazed, ate, cleaned up, walked, took off my boots and socks, my pants, my sweater, my hat, my gloves. It was lusciously warm (55º-ish), sunny. Incredible. I had the overwhelming feeling that I would pay for so much pleasure, and dearly.

I tried NWFing (noofing) – noosing while feeding – this afternoon. What a truly useless pursuit. The Guillemots are in and out of the nests so fast they hardly touch the ground. Three hours I spent with four mats and not one catch. Blah. I’m glad I banded and hooped as many birds as I did earlier in the season.

I ate leftovers today to spend more time enjoying the day. Took a walk this evening – sat down on a big drift log on the ocean and watched the world. The water is calm and flat; tiny little waves keep the gravel rolling, a pleasing, lulling sound. The sky is half cloudy again like yesterday – darker and grayer tonight. The sun shone through the clouds and cast an indescribable light. It was utterly peaceful and quiet. I drank my peppermint tea and was.

I’m down to 68 chicks in 50-some-odd sites – the rest walked away or died. I have to start collecting down tomorrow. I hope beyond my wildest dreams that it is dry and not too windy as collecting down in the rain and a gale will not be entirely successful. 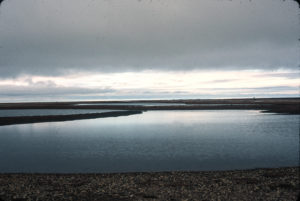 I’m curious how much weight a chick can lose and still recover. The maximum loss to date is 100g – that seems an enormous amount to recover, and so far the little beast is alive. Although only two chicks died today, many lost weight again after yesterday’s recovery. The Jaegers are still working the colony and stealing a lot of fish. Bullies.