Dear Papa John’s: you need to rebrand. Like, next week. 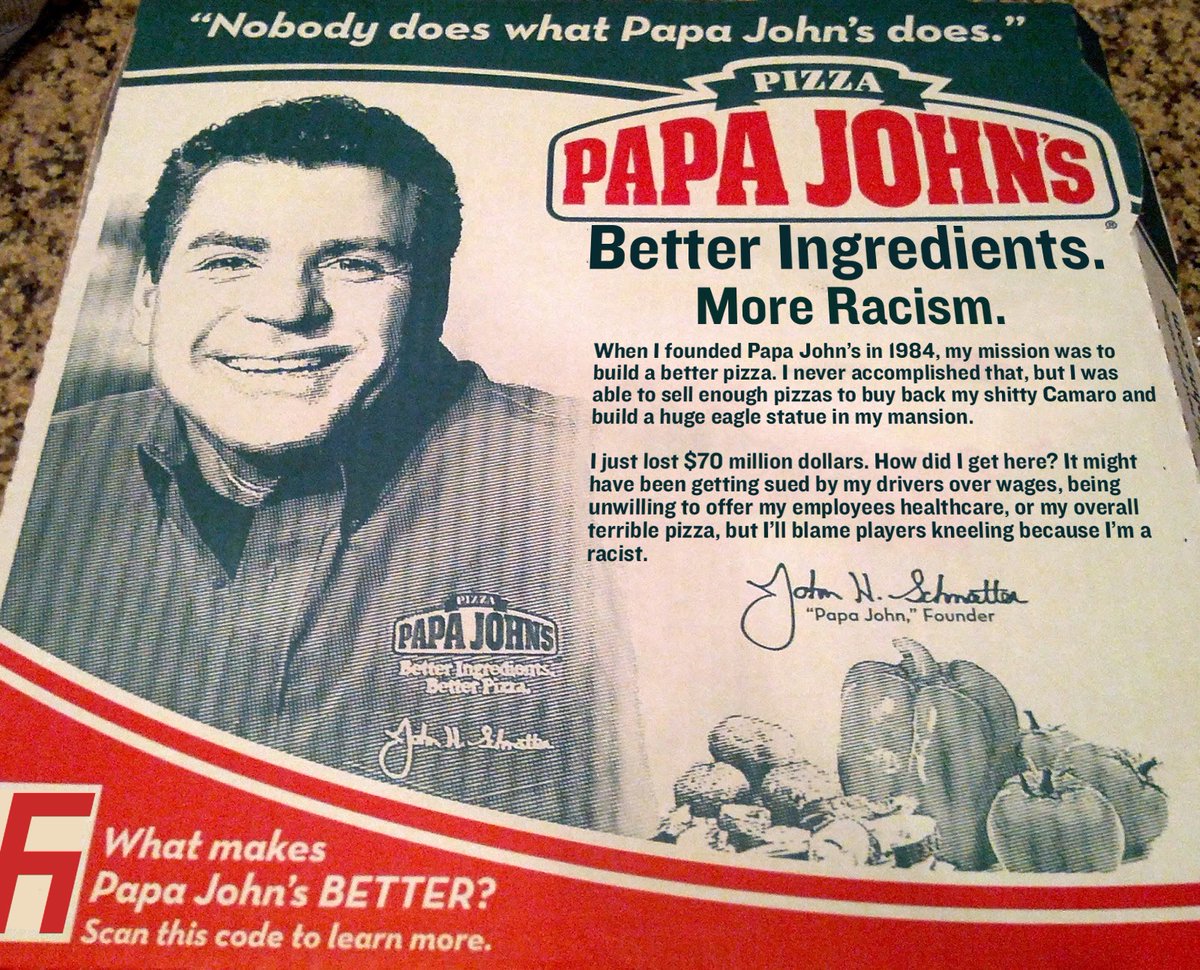 The brand now stinks worse than the actual pizza, and it’s going to stay that way.

The F6 shitnado that is Papa John Schnatter continues unabated. The most reecent episode found him dropping N-bombs during a company conference call, and as a result he’s now out as Chairman of the business he founded.

Also, people are rushing to scrub his name off every wall, edifice and bathroom stall where it appears. The latest: Papa John’s Stadium at the U of Louisville will now be called  Cardinal Stadium.

John Schnatter, the pizza chain founder, admitted earlier this week that he used the N-word during an internal conference call. Since then, the fallout has been swift: Schnatter resigned from the school’s board of trustees and as Papa John’s chairman. Not only will the Papa John’s name come off the football stadium, Bendapudi also said the school would take Schatter’s name off the Center for Free Enterprise inside the business school. The changes are effective immediately.

Here’s a take for the PJ board from a long-time marketing guy: I don’t care what kind of industrial strength cockroach remover you use, you’re never going to scrape the drippings off that brand.

I know rebranding is hard and it’s expensive, but I’m not sure you have much choice. As long as the guy’s name is on the box, the odor of his hateful, racist legacy will overpower whatever is inside, no matter how many third-rate pepperonis, onions and sardines you pile on it.

Which means sales will be fine in Deplorables country (you’re still The Official Pizza of the Alt-Right®) but maybe not so great everywhere else. And despite the last election’s results, understand that “everywhere else” equals most places.

The name has to go. The logo has to go. Any acknowledgement on the Web site that anybody in the company ever met Schnatter has to go.

And while you’re changing everything, maybe you could do something about the quality of the product itself? Just spitballing.

I’ll leave the details of the new brand to whichever agency you deicide to pay $20 million buck to for an idea that makes not a damned lick of sense.

One problem at a time, you know.