Learn to love the body you have conditioned yourself to hate

Be guided by a second golden rule, no more or less important than the first: Speak to yourself as you would speak to others.

We have all heard some variation of the “golden rule” since pre-school or before.

“Do unto others as you would have them do unto you.”

But what if you don’t think you should be treated well?

I thought the hatred I had for myself and my body came with my anorexia. I hoped that it would leave with my recovery.

I still say terrible things to and about myself sometimes. I still struggle to get dressed in the morning, to put make-up on, to look at myself in photographs. Some days being alone with myself feels like too much to bear.

The disease of body-hate spreads far beyond those with eating disorders.

Body-hate is the norm.

We live in a culture dependent on our self-deprecation.

Think of the photoshopping of men and women in advertising, the rise of each new reckless fad diet, the deluge of irresponsible fitness programs.

Think of how many foods you can find labeled “skinny,” how many items of clothing you can find meant to “shape” you, how many gyms promise six-pack abs.

Those messages compel us to question what we value about ourselves until that questioning becomes a habit of body-hate.

We don’t realize what we’re saying is more than just conversation filler. It is self-deprecation.

“I’d have to run on the treadmill forever to burn that off.”

“I could never wear that.”

Insidious phrases like these hurt not only the individual who says them, but also those listening.

Suppose a mother continually talks about her body and how it can be changed. Her daughter, who loves and trusts her, will conclude those are the most important qualities a person possesses. She will believe those are the qualities other people value in her too.

The disease spreads from person to person – sister to brother, father to son, friend to friend. 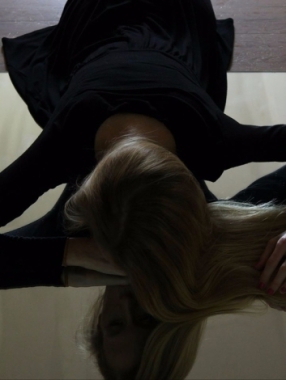 Although recovery from anorexia didn’t fix my poor body image, recovery did force me to devise a method for improving the way I talk to and about myself.

First, I identify the speech that says I hate my body.

I visualize my nieces and nephews at five years old.

I visualize my future sons and daughters at five years old.

I visualize myself at five years old.

And I ask: What have I been saying lately? Would I say it to a five-year-old version of myself?

Would I tell five-year-old me to run for hours at the gym because the number on the scale doesn’t say what I want it to? No.

Would I tell five-year-old me to take a quick run because I’ve been stuck at my desk worrying about tomorrow’s economics test too long? Yes.

Once I have identified phrases that provoke hate of my body, I work on reframing them.

Why do I go to the gym? “I go to the gym for fun, to improve my health, and to de-stress. The number on the scale does not determine how well I think, feel, or love. My body does amazing things for me and allows me to be a gift.”

If I can’t go to the gym without a mindset of hatred for myself, I must not go.

If I am denying myself a food my body craves because I feel fat, I must eat it.

If I am keeping my old jeans to guilt myself into fitting back into them, I must throw them out.

This is not the only process for confronting body hate. You may have to develop a tool that works for you.

But whatever the method, be guided by a second golden rule, no more or less important than the first: Speak to yourself as you would speak to others.

Michael Nelson, a survivor of anorexia nervosa, is a journalism student at St. Bonaventure University. She writes at Your Mind Comes Too.