When speech isn’t free — but ought to be

If there is a bedrock principle underlying the First Amendment, it is that Government may not prohibit the expression of an idea simply because society finds the idea itself offensive or disagreeable.

If the once-firm boundary of free speech has now shifted to include offense claimed by the hearer, what’s the point of a constitutional guarantee that says the speaker can say what she or he wishes? 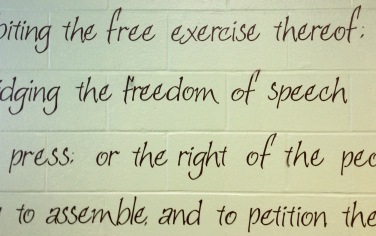 Justice Brennan would likely be astonished by what limits free speech these days. Government is not prohibiting speech as much as cultural and social mores. Someone who just doesn’t like what another speaker says can shout it down, inhibiting the free expression of ideas — because the hearer claims such ideas are offensive or objectionable.

No one needs spend more than a few minutes to have Google find speech she or he considers detestable or hurtful. Oodles of recent speech labeled racist by hearers have surfaced in the news, says The Washington Post. That speech has had impacts on the speakers — and it’s not the government levying the paddle.

The Post’s story notes such speakers have been athletes suspended or expelled and a municipal official fired after they spoke in ways deemed by hearers to be objectionable and unworthy in a public square as defined by those hearers. Legal but offensive or objectionable speech has had social consequences. (Yes, I know: employment contracts may curtail speech. Ask ESPN “personalities” with Twitter accounts.)

Courts, most notably the U.S. Supreme Court, have held that offensive speech is protected. That means the hurtful speech uttered by Nazis at Skokie and the idiots from the Westboro Baptist Church protesting gay funerals is protected speech. (There are categories of unprotected speech, of course.)

America is advanced citizenship. You gotta want it bad, ‘cause it’s gonna put up a fight. It’s gonna say, “You want free speech? Let’s see you acknowledge a man whose words make your blood boil, who’s standing center stage and advocating, at the top of his lungs, that which you would spend a lifetime opposing at the top of yours. … Show me that, defend that, celebrate that in your classrooms. Then you can stand up and sing about the land of the free. [emphasis added]

Has public opprobrium for legal but offensive speech become the de facto limitation on the free expression of ideas?

Has the offended hearer’s cry of “that’s demeaning to [insert race or or religion or gender here]” become a dog whistle preventing speech that should be uttered and debated?

Yet that must be done.

Our current civic discourse (translation: the bullshit slung by self-centered, selfish, despotic idiots of varied political, cultural, social, and religious persuasions) has curtailed the meaning and intent of the First Amendment — to protect the right to speak that which others oppose. In this Donaldian Age, any speech uttered — if it offends anyone — is speech some idiots may claim must be forbidden because, they say, it is a) a lie, b) a slander, c) an affront to dignity, d) treasonous, e) all of the above.

That’s not what the Constitution of the United States says. That a hearer claims offense should not be the curtain that shrouds what the First Amendment permits. Worse, offense upon hearing legal speech should not promote self-censorship.

When those who choose not to speak because they fear pissing off someone — or some [insert left-wing or right-wing or nutjob group of choice here] — then ideas do not enter the public square. When that happens, we all lose. We all succumb to fear.