Which should drive Donald from office, the Russia investigation or the women who accuse him of sexual assault?

“#metoo” is already driving a wave of change across the country. If Donald’s accusers force him from office, that wave will turn into a tsunami. 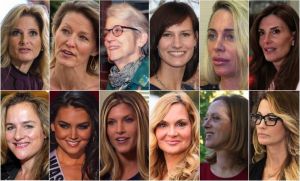 As of November, 2017, at least 19 women have accused Donald Trump of sexual harassment, assault, and/or rape. (image credit: Yahoo news)

Last week, I saw someone suggest that Donald might be driven from office by the many women he’s harassed and/or assaulted over the years. That got me thinking about the following question: would I rather see Donald driven from office by his accusers, or by Robert Mueller’s investigation into Russian interference in the 2016 election?

At this point, I think I’d prefer to see Donald forced from the Presidency by his accusers.

To date, Donald has been credibly accused of sexual harassment and assault by 19 women. The assaults occurred over four decades, with the first occurring in the early 1980s (Jessica Leeds) and most recently in 2013 (Cassandra Searles). The accounts have a common thread that is in line with what Trump himself admitted on the Access Hollywood tape:

I better use some Tic Tacs just in case I start kissing her. You know I’m automatically attracted to beautiful—I just start kissing them. It’s like a magnet. Just kiss. I don’t even wait. And when you’re a star, they let you do it. You can do anything.

Grab ’em by the pussy. You can do anything.

This is exactly the same approach Donald’s accusers describe – gropings, aggressive and unwelcome kisses, etc. Several of his accusers say that Donald assaulted them in public places, apparently just to see if anyone would call him on it (and no-one did). These are the actions of someone who believes he “can do anything,” someone who thinks he’s above the law, someone who disrespects women entirely, someone who is a serial sexual predator. And someone who should not have ever been allowed anywhere near the Presidency of the United States.

If Donald’s accusers bring him down, then that sends a message to women that the current “me too” moment isn’t going to fade away or be shouted down by powerful men. It shows that women, working together, can bring low the most powerful men in the country. And it sends a message to men that none of them are safe from facing their day of reckoning, whether it be in a courtroom, board room, or living room.

I’m already seeing that “me too” is driving changes in government and private organizations. Bringing Donald down would turn the “me too” wave into a tsunami the likes of which the US hasn’t seen since the introduction of the pill, if even then.