Those who cannot remember the past are condemned to repeat it.

“…ternarity became the ideology of feudal society; the division into groups was “not on the basis of actions performed, roles played, offices assumed, or services mutually rendered, but rather on the basis of merit.” – Georges Duby

Medieval depiction of The Three Orders: left to right, the Clergy, the Nobility, the Laborer (image courtesy W. W. Norton)

As what the Republicans call the “tax cut” bill and 79% of the public calls the “tax cuts for the rich, nightmares for everyone else” bill moves toward a vote, I’ve been thinking a lot about the French medieval historian Georges Duby.

That’s how I roll, people.

Duby has been on my mind because a couple of years ago I wrote an essay on his masterful examination of the socio-economic structure of medieval Europe, The Three Orders.  I’ve been turning over in my mind one passage in particular from that essay:

What is left for readers is to consider how Duby’s elucidation of that far off time provides insights into our own imaginings of this new millennium.

Duby’s term for the organization of medieval society, as mentioned above in the quote, is ternarity. The standard divisions are as follows: those who pray (the clergy, which included all offices of the church from humble parish priests to the Pope); those who fight (which included the nobility, especially those serving in the knighthood); and those who labor (this group included all of those considered commoners whether wealthy merchants, traders/craftsmen, or impoverished farmers). Here’s a pretty apt diagram with some statistical information about the percentages of society belonging to each group: 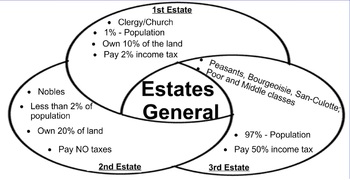 The medieval system of ternarity, still in place in 1789, that was finally ended by the French Revolution (image courtesy Teachers Pay Teachers)

We hear a lot these days about the 1% and the rest of us.  For those of us worried about economic inequality (which, I suspect, is anyone reading this), here’s some discomfiting information: by the time of the French Revolution in 1789, under the ternarity system, “those who labor” paid a 50% tax rate while the church paid 2% and the nobility paid nothing.

In America, we do things differently, of course. Here the church pays no taxes even as some of its princes – both Roman Catholic and evangelical – live like real princes. Our “nobility,” the rich, pay tax rates that are, on paper, considerably higher than the church paid under the Ancien Regime. However, plutocrats need not fear – the elimination of major deductions for the majority of individual citizens coupled with the elimination of taxes applicable only to the rich will ensure that the tax burden shifts far more onto, shall we say, those who labor. (We should not ignore corporations who hold status as “citizens” and enjoy – and will enjoy in future – protections from taxes via deductions and credits that are unavailable to those who labor.)

The anger rising in America over its growing income inequality will only be exacerbated by this new tax plan – a main provision of which will likely continue to guarantee that income inequality continues for the foreseeable future. Whether that anger will accelerate or subside into acceptance (sullen or resigned) remains to be seen. Perhaps the rich will find comfort in historical fact: it took approximately 500 years under the oppressive system Duby examines in The Three Orders for the anger of the oppressed to explode into the bloody retribution of the French Revolution. Unfortunately, 21st century technologies will likely shorten – perhaps geometrically – the time span that our American “betters” lord it over the rest of us. What is now merely known as the Resistance may explode into revolution – sadly, likely violent – in short order.

A scholar like the late Professor Duby would certainly have found this turn in historical events fascinating. And the words of Georges Santayana might creep into his thoughts:

Those who cannot remember the past are condemned to repeat it.