The S&R staff has a private list we use to strategize, conversate and sometimes just socialize. Occasionally we find ourselves discussing things that are even more interesting than what gets published. When this happens, we sometimes pull it all together and post the thread. We call these moments “Scrogues Converse,” and this morning we have an interesting one for you. – Editor

Something slightly unanticipated is happening and I’m unsure as to whether this is as big as it gets, whether I’m projecting, or whether it’s nothing much at all … but …

Trump wins despite being uneducated, a moron, a bigot, a misogynist, and with numerous repeated claims by women of being assaulted or abused by him, and with his own admission of committing sexual assault.

Despite everything, I still think Trump (and Brexit) won mostly because liberals assumed that bigots didn’t present an existential threat.

There was shock. Despair. Anguish. Resentment. And resignation. 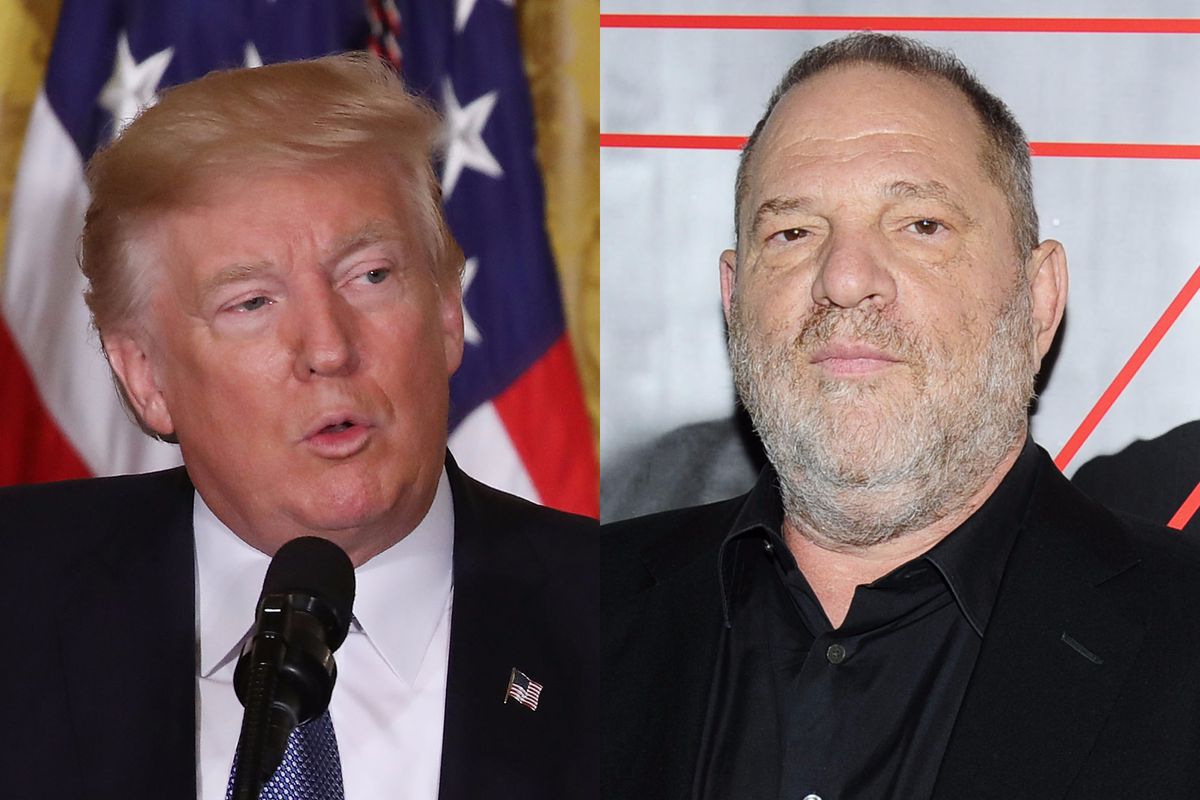 Women tested the boundaries, and then coalesced in rage. And not only in the US. In the UK senior politicians from the two leading parties have been accused of abuse and rape, and been either kicked out or resigned. A senior Labour politician committed suicide yesterday after (so far unknown) accusations.

As far afield as South Africa, senior figures have been accused of rape and sexual assault.

None of these sorts of accusations are new, but it’s the sudden clustering and whimpering response by the accused that feels significant.

As I said, this may be wishful thinking on my part.

Add in the Paradise Papers release (of ostensibly legal tax avoidance) and the VA election … and you have a backlash to the backlash.

Yesterday it was in the news that if a staffer accuses a US congressman of sexual hareasment/assault, the victim has to first go to counseling and then mediation *before* she can file a complaint. There were some rightfully pissed off and ready to vote women in my office.

I think we’re starting to see the natural cracks in a system destabilizing. It’s hard to determine much meaning from individual examples because we’re looking for historical perspective which is by definition hindsight and allows the connecting of dots.

I don’t know what it all means, but I’m 75% confident that it’s not good. And – no offense to Jim and Denny – but it sure looks like the Boomers plan to burn the world down around them rather than make any systemic changes which might make their lives/bank accounts slightly less happy.

On the plus side, there’s a decent chance that they’ll inadvertently achieve the stated goals of their youth through their youngest children. The ones being radicalized in the manner that most youth are from a sense of fairness, optimism and desire to see the world a better place. Unlike their parents, the option of turning towards a more selfish fulfillment of the American Dream looks pretty off the table for these young people. Those with not much to lose have a lot to potentially gain by upending the system.

…and their the only ones who know how to work the technology that makes the world go round.

I have a good deal to say about this, but I will try to keep this brief.

1) Lex, your criticism of Boomers has merit, but a significant swath of Boomers has not truly been heard from yet. (We should also include Wufnik) – the Boomer left. Many of us retreated from the barricades after we got Nam and Nixon done. Some, like Denny and I, pursued the contemplative life. (Wuf made this more of an avocation.) But we, to paraphrase Graham Nash, taught our children well. And as Trumpism shows itself for what it is and threatens our children and grandchildren, don’t be shocked to see old lefties begin to assert themselves, led by leftist women, especially significant others and daughters.

2) Political victories are always about energy. Yesterday’s gains are about the left being energized to send a message. What we will learn, and soon, given the number of runoffs in the VA legislature, is whether that energy can be sustained. Trump, if he had a brain, would realize that the energy that elected him is unreliable based on what happened yesterday. Smarter Republicans will get the message that even their dirty tricks of gerrymandering and voter suppression won’t work against energized opposition. They’ll be faced with a choice – working with an unreliable leader and trying to re-energize their voters, or repression in various forms. They may try both tactics. But don’t be surprised if they turn to the latter of those tactics in a big way. That will re-energize the left in ways that will lead to victory, violence, or victory for one side or the other through violence. Too early to say, but rest assured that the Boomer left will re-energize as both activists and mentors. That will be a beautiful and horrifying thing to see.

One item to note: the group of Americans getting rid of property, especially real estate, fastest to become mobile are – yup, Boomers – including this one. That economic factor has some profound political implications.

The old gods are laughing with delight….

I agree and I’ve noticed it. It’s not fair to say “all Boomers” in any case, because we associate the generation with sex, drugs, rock and roll, and Vietnam; all on the liberal side. And that’s not true. It’s always been a split generation; the Reagan Democrats were mostly Boomers. Trump was elected by mostly white, middle-class Boomers.

I’m fucking tired of my whole adult life being characterized by being trapped in the crossfire of your generation’s culture war. But, you know what? If the good guys of your generation want to have one last epic clash of good vs evil, I’m in.

In the middle of #metoo a friend was at a meeting for a liberal organization where a male member criticized a female member for “sounding like an angry woman” when she emphatically defended a position she had taken. The incident left everyone in stunned silence. Later the woman who was criticized called out the other members–rightly–for failing to act.

It would be nice to think that we have turned some sort of corner one year after the election–but I’m not convinced. The organizations which, on the one hand, provide people with a source of support and hope can also disappoint. The male members of these organizations can still be verbally or physically intimidating–they can still exercise power in ways that are shocking to witness. And the fact that they still feel free to behave publicly in ways that are demeaning, or worse, is a continuing problem.

Political activity in Ohio also continues to be uneven at the one year mark.

A “Victims’ Rights” amendment being added to the Ohio Constitution will make it more difficult for some defendants to gather evidence of their innocence. And Big Pharma spent over $62 million to defeat an initiative that would have required the state to pay no more than the VA prices for drugs.

The Dem machine triumphed in Cuyahoga County/Cleveland yesterday. The women who stepped up after the March to run? Mostly defeated by the old guard.

I don’t even know how to approach identity politics. The Progressive Caucus backed a white man for county party chair and put out the word that the African-American woman favored by the traditional party was their tool.

The Dem African-American mayor of CLE won an unprecedented 4th term, bankrolled by wealthy GOP and business interests. His opponent, another African-American male, was backed by the Progressive Caucus, until he was endorsed by the head of the CLE police union who backed Trump.

Something is definitely changing, but I worry about whether the momentum can be maintained. My crystal ball is cloudy.

Yeah, as I said … I see the rage and movement, but I’m not sure where it goes. The UK government could fall by the end of the week, and then who knows … no-one has a mandate to do anything, for any party.

I don’t find it all surprising that there’s a backlash. On the contrary, that seemed the most predictable thing in the world, writ large. However:

1) What was, and remains, less certain, is the shape it might take. That we seem to be seeing women on point at the moment is wonderful, but frankly it could happen differently because the Party of Trump (PoT) has given most everyone – demographic groups and interest groups (climate, healthcare, child welfare, etc) cause to revolt. So I had no concept that the tail of the whip might snap off over something like Hollywood old-boy network rapists.

With luck, everyone else is emboldened by it. And to Gavin’s point, the men on the wrong end of the backlash have reacted … feebly? They know they’re busted, they know the tone of the world right now, and the best part is all the predators out there, in governments, in corporations, in local businesses, in just about every corner of the society, who know it’s coming for them.

There is no statute of limitations in the court of public opinion.

2) While I knew there’d be a backlash, there was no assurance it would be accompanied by enough votes to win the day. Still isn’t. Virginia, the battleground with the brightest light on it at the moment, is encouraging (gubernatorial win, Danica Roem – and that result is an absolute thunderbolt in a place like Richmond) – but a lot has to happen before we can take back the country. As Cat indicates, it ain’t like the bad guys have laid down their arms and given up.

3) Roem is critically important in another way. Her bathroom-bill writing homophobe-in-chief opponent of course tried to make it all about how Jesus hates them devil trannies (and by extension, all liberal moral degenerates), but Roem stuck to the playbook. She had a specific issue – an infrastructural goal of pressing interest to the district – and her focus never wavered.

What if the goddamned Democrat establishment cultivated an agenda that mattered to the electorate – I don’t know, say jobs? Healthcare? Anything that acknowledges the malignancy of our vast economic inequality? I mean, we could come up with something around the Paradise Papers, right? They say all politics is local, and Complexity Theory has taught us well the importance of emergent, bottom-up (think grassroots) processes. What if the powers that be actually paid attention to the things Gavin and the rest of you are talking about? Think that might play at the polls in 2018 and 2020?

I’m not predicting, mind you. Just asking what if…

4) Trump thinks he’s been elected dictator-for-life, though, and he seems surrounded by people who either agree or who are too scared to disagree out loud. So I’m not sure I can take an orderly transfer of power for granted just yet. Something to think about next time you’re at a gun show.

Would the US military or police obey an order to massacre citizens? Even if the answer is no, that doesn’t mean protest wins. Your electoral system is designed to reward Republicans and bigots.

And the same question holds for EU members. But for South Africa which has already – under the ANC – massacred protesting citizens? For India? China? Russia?