All shook up: a historian examines rock and roll…sorta

The payola scandal destroyed Alan Freed, but Dick Clark put his boyish good looks and vanilla style to good use in saving himself.

“Rock and roll might best be summed up as monotony tinged with hysteria.” – Vance Packard 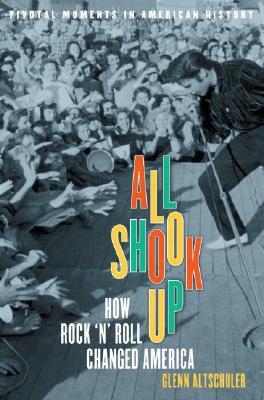 I just finished a book that is kinda/sorta amusing, kinda/sorta amazing. Glenn Altschuler’s All Shook Up: How Rock ‘n’ Roll Changed America will amuse anyone who knows a lot about rock music and rock music history (ahem); it will amaze anyone who thinks rock and roll books should be about – well, rock and roll, for one thing. This historical account of the rise of rock and roll in the 1950’s and its evolution and status through to the early 2000’s is long on what we call cultural history.

In some ways this is a good thing because Altschuler can focus on America as a society and how rock and roll music’s explosion into public consciousness, after simmering in a stew of up tempo country music (think Hank Williams’ “Hey, Good Lookin'”) and rhythm and blues (think of Joe Turner’s “Shake, Rattle, and Roll”), affected those who were teenagers, their parents, teachers, and other elders, and the social structure those parents supported and sustained.

The major figures who emerged as rock and roll’s stars – figures such as Chuck Berry, Little Richard, Jerry Lee Lewis, and, of course, Elvis – receive what feels like cursory treatment, at least as cursory a treatment as Altschuler can give them and explore his thesis (see title). In other words, Professor Altschuler is more interested in the effects of rock and roll on American culture than in rock and roll itself.

What Altschuler focuses on are the institutions and personalities in that second group I mentioned a couple of paragraphs ago – those various elders. Much of All Shook Up focuses on the machinations of those elders to derail the burgeoning rock and roll movement. One of those machinations deserves further discussion as it is central to Altschuler’s thesis.

The machination Altschuler looks at is the payola scandal that rocked the popular music industry in the late 1950’s. The scandal involved record companies, radio stations, and the biggest non-musician stars of the era, disc jockeys. The two deejays whose careers Altschuler chooses to examine are both historical figures now, though one was consigned to Trotsky’s metaphorical dustbin well before the other. Alan Freed, the Cleveland disc jockey who is widely credited for coining the term that gives the genre of music he championed its name, rock ‘n’ roll, is one. A Philadelphia DJ who was able to transition his radio gig into a long and successful career as a television star and music impresario is the other. His name? Dick Clark. The responses of these two influential and iconic figures in the history of popular music to the scandal which became so politically poisonous it prompted a Congressional investigation tells the reader a lot about who the men were. How the passionate and fiery, ultimately admirable Freed was destroyed, financially and personally, by the payola scandal and how Clark, the sly, self-promoting manipulator who forever played the bland diplomat, survived and thrived well enough to become one of the most powerful men in pop music for decades is an object lesson about how music is a business, first, last and always.

Freed partly doomed himself by his adamant stance defending both rock and roll performers and their audiences, the teenagers mentioned above. His drinking also likely played a major role in his premature death at 43. But his legal troubles, beginning with a charge of incitement to riot charge during a Boston rock show when he told his audience, who were being bullied by police for dancing instead of sitting quietly in their seats, “It looks like the Boston police don’t want you to have a good time,” led to his destruction. In his appearance before Congress Freed denied taking payola and in one of his comments away from the hearings quipped, “What they call payola in the disc jockey business they call lobbying in Washington.”

Thus Freed made himself a target. What happened as a result, as Altschuler notes, was inevitable:

Present at the creation, Freed remained a poster boy for rock ‘n’ roll, a cheerleader for many controversial performers. Arrogant and argumentative, even when he hadn’t had too much to drink, Freed was easy to to portray as a wild, greedy, and dangerous man.

Dick Clark was the antithesis of Freed – his public persona was invariably pleasant, even vanilla. His boyish looks and manner made him a popular figure, first in Philly radio (where looks didn’t matter) and then in Philly TV (where they mattered enough that his TV show Bandstand got picked up by ABC and renamed American Bandstand). Clark also avoided controversy on his program by enforcing strict dress and behavior codes, something Alan Freed had not done on his ABC program Big Beat, which got cancelled after black singer Frankie Lymon (who, with his group the Teenagers produced the 50’s classic “Why Do Fools Fall in Love?”) danced with a white female audience member. When the payola scandal hit, Clark was as deep as, perhaps deeper in the morass than Freed. He owned part interest in a record company and distributor – and he plugged that company’s records frequently on his show, a clear act of payola. While Freed had accepted traditional forms of payola (cash and gifts for what he called “consulting” with record companies as well as fake songwriting credits that brought him royalties – he got co-songwriting credits for, among others Chuck Berry’s “Maybellene” and The Moonglows’ “Sincerely”), Clark was a record company owner and held copyrights on over 150 songs (including classics such as The Crests’ “Sixteen Candles”), none of which he wrote.

But when he testified before Congress, Clark put his boyish good looks and vanilla style to good (for him, anyway) use. He assured the investigating subcommittee that he had divested himself of his interests in the music industry (which was true – greatly to his financial advantage) and that he had never engaged in payola practices (which was false – also to his great financial advantage). Unlike Alan Freed, however, Clark’s relationship with his bosses, the police and other legal authorities and parents was conciliatory and obliging. What Clark did, then, at the expense of his personal credibility with some of his audience, was save his own skin:

In his testimony to the subcommittee, Clark searched for space between the Scylla of self-incrimination and the Charybdis of non-cooperation. He was more concerned about limiting his own liability than defending the music business.

Clark did survive the payola investigations, of course. In response, he foisted upon American teenagers artists and music that the great rock critic Nik Cohn called “high school”: cloying songs about teen-aged love sung by manufactured pop idols such as Frankie Avalon, Fabian, and Bobby Rydell.

And therein lies the next part of the tale. The payola scandal succeeded in its attempt to destroy the wild spirit of rock and roll as it emerged in America in the mid 1950’s. Coupled with the deaths of Buddy Holly and Eddie Cochran, the first of many attempts at religious redemption by Little Richard, the imprisonment of Chuck Berry on morals charges, Jerry Lee Lewis’s catastrophic marriages and legal entanglements, and Elvis Presley’s army induction, American rock and roll would nearly fade into obscurity.

Altschuler notes, though, in the concluding chapter of All Shook Up that England did not suffer the cultural struggles over rock and roll that America did. Neither did they embrace the schlock rock of Dick Clark’s proteges. Instead, British kids listened to the music of the great American rock and rollers and brought it back to America in the mid-1960’s British Invasion. With the manufactured teen idols swept aside by The Beatles, The Rolling Stones, and their compatriots, rock and roll evolved into rock and ruled American popular music for the next 30 years, changing American culture profoundly.

Altschuler is shakiest in this area. His interest, as I mentioned at the beginning of this essay, is not in rock music or its musicians. That is nowhere more evident than in the last paragraph of All Shook Up:

In the half century since rock ‘n’ roll got its name (the book was published in 2005), the music has taken many forms, including R&B (!), romantic rock, heavy metal, punk rock, grunge rock, Christian rock, and postmodernist feminist rock. More than ever, it frustrates anyone intent on giving it a rigorous, musical definition. It still has legions of fanatic fans and ferocious foes, ready to pledge more than their allegiance or antipathy to Madonna (!), Bono, or J. Lo. (!!) The music that changed America in the 1950’s and 60’s, rock ‘n’ roll, continues to solidify youth consciousness….

One can only expect that Altschuler’s next book might be about how the Internet or social media changed our culture.