Twilight of the gods: a musicologist considers the work of the Beatles…

Mellers’ exploration of the Beatles as a group and as solo artists is rich in insight; anyone who wants to understand both the musicology and the psychology of the Fab Four owes it to himself to read this book.

(citing George Harrison describing Beatle music): “‘It’s true, but it’s still a joke…. It’s serious and it’s not serious.’ This seems to me perhaps the truest and most touching quality of Beatle music….” – Wilfrid Mellers 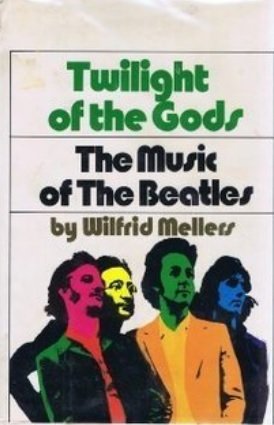 Twilight of the Gods: the Music of the Beatles by Wilfrid Mellers (image courtesy Goodreads)

Wilfrid Mellers was a respected, even revered, musicologist, composer, and professor of music who taught for decades at the University of York. He wrote books analyzing the work of composers ranging from Bach to Percy Grainger as well as studies of jazz, folk music, and blues. His interest in music of all forms led him to write studies of both the Beatles and Bob Dylan. At the time they were published these studies were dismissed by both “serious” academics and rock musicians. In the view of the former group, Mellers was pandering to pop culture zeitgeist. In the view of the latter group, Mellers was an ivory tower dilettante giving arcane and flowery explanations for the inexplicable power of rock to move its audience.

Given that the Beatles and Dylan have now attained historical importance as arguably the most important composers of their time and that Dylan has even been awarded the Nobel Prize, Mellers looks rather less pandering and pompous than prescient these days. His classic study of Beatle music, Twilight of the Gods, is a work of considerable insight into what makes Beatle music significant both as music and as cultural phenomenon.

Mellers’ analysis is not necessarily an easy read for those with no musical background. He discusses the compositions in the specialized language of music theory, and he has a fondness for terms such as “melisma” and “lydian mode.” Here’s a typical passage, this one discussing the title song of Sgt. Pepper’s Lonely Hearts Club Band:

In tonality it is curiously ambiguous: for while it gravitates towards a smiling G major, the introduction wobbles between dominant sevenths of D and F, and when we reach the tune itself and the Band, having been introduced, plays and sings, the rhythms of the tootling arpeggiated tune are tipsily displaced by cross accents (three against two) and the ‘open’ tonality is clouded by blue false relations.

But what I found myself enjoying most in this re-read of Mellers’ work were his insights into the Beatles’ psyches as composers. His discussion of the thinking fueling the composing of John, Paul, and George, provided by his analysis of their early solo compositions, provides some of the best writing in the book. His approach to Paul’s first two solo albums, McCartney and Ram, focuses on McCartney’s technical skills as a musician and his decision to retreat from the complexities of his life into composing as external act meant to amuse and entertain:

Paul… is more impressive in purely, or one should say conventionally, musical skills. His art is lyrical and extrovert, relatively uncontorted even when fierce, and he’s prone to non-personal narrative and balladic songs….. McCartney seems to have made this Arcadia, this ‘mirror image of the real world, where birds sing, and lyrics grow on trees….’ The components of Paul’s songs are lovingly assembled like the parts in a vintage car…. Their excellence is how they are put together; all the pieces fit beautifully.

John’s art is introvert and more intense, his verses frequently being concerned with personal experience…. Lennon’s ‘underground’ songs start from words, which stimulate a music both primitive and deeply melancholy. The music… discovers a new and deeper meaning…. The powerful effect of these solo Lennon solo songs is even more than normally misrepresented by any attempt at written notation: this is ‘oral’ music that can be realized only by way of oral techniques.

He then follows this with an insight that makes any McCartney fan wince slightly:

And then there’s George, whom Mellers sees as a talent in his own right though of a different quality than Lennon or McCartney:

Harrison [is] a real composer, with an identity very different than Lennon or McCartney…. He hasn’t their priceless gift for the inevitably memorable tune, nor their wit, their unexpectedly mature recognition of ‘others modes of experience that may be possible’; indeed his songs are almost never funny, though they are sometimes blithe. Nonetheless, his feeling for a runic, magical poetry and his exploration of harmonic and tonal mysteries are both personal and poignant; and it would seem that, in his quieter way, he knows what he wants and has in him to do.

About Ringo Mellers offers an analysis that will ring true for even the most casual Beatles fan:

…his contribution to the group had always been his sterling commonness, a gruffness and bluffness that yet made him lovable….

Anyone who knows the Beatles’ group and solo work will readily recognize that, whatever one’s personal preference among them, Mellers understands John, Paul and George as composers and Ringo’s importance to the history of the band. And this sort of insight runs throughout Twilight of the Gods. Mellers’ exploration of the Beatles as a group and as solo artists is rich in insight; anyone who wants to understand both the musicology and the psychology of the Fab Four owes it to himself to read this book.