It seems Jane Austen is getting hit on both sides, but all this attention, exploitative and dismissive, merely really proves what will continue to be true: Jane Austen’s stature and power remain undiminished.

“I do not want people to be very agreeable, as it saves me the trouble of liking them a great deal.” – Jane Austen 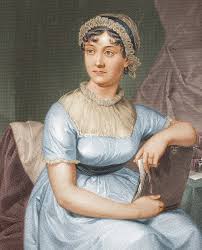 Like everyone else, lots of stuff flows by in the endless stream of mostly effluvia that we know as the Facebook feed. One of the most irritating of Facebook’s recent “improvements to the experience” is the constant repetition of posts and ads. The FB experience becomes then, as I’m sure many of you know, an exercise in annoyance and frustration.

As the old saw (and my friend Snuzz) remind me, however, when life gives one lemons, one should make lemonade. So, from the lemon that is my FB feed, I shall attempt to make some lemonade.

Two items that my feed have provided in the last week relate to Jane Austen. Unlike most of the crap my feed offers about authors (quotes I already know by heart or which 10 seconds or so of research show are not by the author cited as the source), these two items, one an Atlantic article shared by a friend and the other an ad posted by the Jane Austen FB page, demonstrate two of the ways in which arguably the most famous woman writer in the English language is a source of confusion and frustration.

Let’s start with the ad first. Since I follow the Jane Austen FB page (though a mostly lapsed Austen scholar, I still like to know what Jane is up to these days and where else could I find that out except on the Social Network®), I’ve been “reminded” (FB’s term for “annoyed the shit out of”) almost daily for weeks now that if I’m to be a truly informed follower of JA I simply must download (for free!) The Essential Guide to Jane Austen, for without this handy aid I certainly can’t be having the Max Jane Experience.

In the deluded hope that taking the clickbait might cause FB to leave me the hell alone, I went to the page where I can download this “essential” guide that is designed to make me the best Austen reader evah. The teaser page then told me some (but not all!) of the things I would learn:

Alexander McCall Smith is a British author known for The No. 1 Ladies Detective Agency. He has done a modern adaptation of Emma. Evidently the Guide believes that my reading an essay/interview about how he adapted Emma will make me understand Emma better. Helena Kelly is an Austen scholar with a book to peddle. Pretty sure I’ll get her “book talk” (i.e., the spiel she uses when she does book signings). Juliette Wells edits books for RandomHouse/Penguin – the sponsors of this “essential” guide. And there’s a travel guide for visiting “Jane Austen houses.” And, of course, there’s “much more!”

So there’s something for everyone, apparently – a popular commercial author telling me how much of a challenge it is to make Austen “appeal to popular tastes.” An Austen scholar for “serious” readers. And a travel guide for Janeites so they can visit (more likely dream of visiting) sites related to the author’s life. This is great. Really great. But what it is a guide to, I am not sure. McCall Smith’s book has gotten lukewarm reviews, and is cultural ephemera. Kelly’s book may take its place as a respected work of literary criticism of Austen, but it’s still literary criticism and will be replaced by someone with a new reading soon enough. And the rest is crap from a publisher with books to sell and whose corporate master may have an interest in a company booking tours of “Austen country” or something.

What this “essential guide” isn’t is anything useful to me. I, like Kelly, found a new angle for approaching Austen which became my master’s thesis. I even published a couple of articles based on thesis chapters. I’ve read tons of Austen criticism over the years – some interesting, some not so much (lit scholars are often notoriously dull writers), so Professor Kelly’s work intrigues me a little, but not enough that I’ll rush to buy her book. And the proliferation of popular “makeovers” Austen has received (including this one I wrote about a while back) has long since passed my “expiration of interest” date.

Oh, one last thing before I move on. Facebook continues to post The Essential Guide to Jane Austen ad in my feed though I have told them “it’s not relevant,” that “I keep seeing it,” that “it’s spam.” I hold FB’s algorithms in the same contempt as I do Wickham or Willoughby.

The article that came across my feed was by a professor at Montclair State University. Writing for The Atlantic (nice work if you can get it), Professor Patricia Matthew goes on at some length about why she teaches but does not love Jane Austen. Professor Matthew’s thesis is that there are more interesting (and suitably obscure, which suits her scholarly bent, I’m sure) women authors that we (because after all, she’s a professor – she may have  one of those t-shirts that I do that say “I’m a professor: to save time, let’s just assume that I am right”) should be reading. I have no problem with this, really. There are wonderful works out there by other women writers, some contemporaries of Austen, who should be read. But then she said this:

But my feelings toward her evolved over the years, starting in grad school, when a combination of literary theory and learning that Mary Shelley had written these rather spectacular other novels convinced me that I was wasting my time with Jane. Austen was for girls, and I was a woman. (emphasis mine)

I have an issue with this. I agree with her that Austen has long been the token woman writer mentioned in the same conversations in which canonized names such as Shakespeare, Milton, Dickens, Conrad, and Joyce get thrown around. But to read a woman scholar dismissing all women readers of Austen as Janeites (see above) demeans Austen in a way that makes me more than a little uncomfortable. And sadly, it makes her sound all too professorial for exactly the reason that professors are taking mostly undeserved heat these days. There’s an old saw that involves babies and bath water that fits here, I think.

In fairness to Professor Matthew, I want to cite another quote from the author that I find admirable:

No matter how sparkling the wit of Austen and her characters, no matter the pleasure of the familiar texts, I want to spend my time and energy elsewhere, in another historical Britain, with authors like Maria Edgeworth, Hannah More, and Amelia Opie who grappled directly with the more pressing social issues of their time—not because I agree with or love the stories they tell, but because those stories show the fuller range of British culture in the 1800s.

That is critique that is more than fair. Professor Matthew, throughout her article, demonstrates her strong interest in issues of social justice, and I’d agree with her that the authors she mentions above are certainly better choices for both scholars and readers interested in those issues. And I understand that she feels frustration when her Austen classes fill up and students gush over Pride and Prejudice or Emma and find that those books “speak” to them when she thinks they might be better served exposed to the socio-political material of Mary Shelley’s later novels (post Frankenstein) or those of Maria Edgeworth.

But as an Austen scholar I would point out that her work explores the social and economic struggles women faced in her time quite astutely. The poverty Elinor and Marianne Dashwood face in Sense and Sensibility; the precarious plight of the poor relation Fanny Price swept into the wealthy, aristocratic but shifty and amoral world of the Bertrams in Mansfield Park (a world made possible by money made on the backs of slaves); the problematic existence of Anne Eliot, a woman of sense stuck in a family of arrogant, spendthrift snobs in Persuasion; these seem to me to be gateways that Professor Matthew could use to lead her students to those authors mentioned above that she finds more – important? Relevant? “Womanly”?

Anyway, it feels to me that Jane Austen is getting hit on both sides: on the one hand, publishers, commercial authors, even scholars (though I give Professor Kelly credit for trying to enrich readers’ understanding of Austen) seem to be capitalizing on Austen’s enduring popularity. On the other hand, Professor Matthew seems to be suggesting that Austen is too narrow in scope at best, overrated at worst, and that readers would gain more from reading other, more “meaningful” writers.

All this attention, exploitative and dismissive, merely really proves what will continue to be true: Jane Austen’s stature and power remain undiminished.