Some people hate higher ed…but they love their teams….

“While 58 percent of Republicans believe colleges and universities have a negative impact on the direction of the United States, I sincerely doubt they feel the same way about their alma maters, their public flagship institutions, the university hospital where their children were born and especially their chosen intercollegiate basketball and football teams.” – Christopher Marsicano, Inside Higher Ed 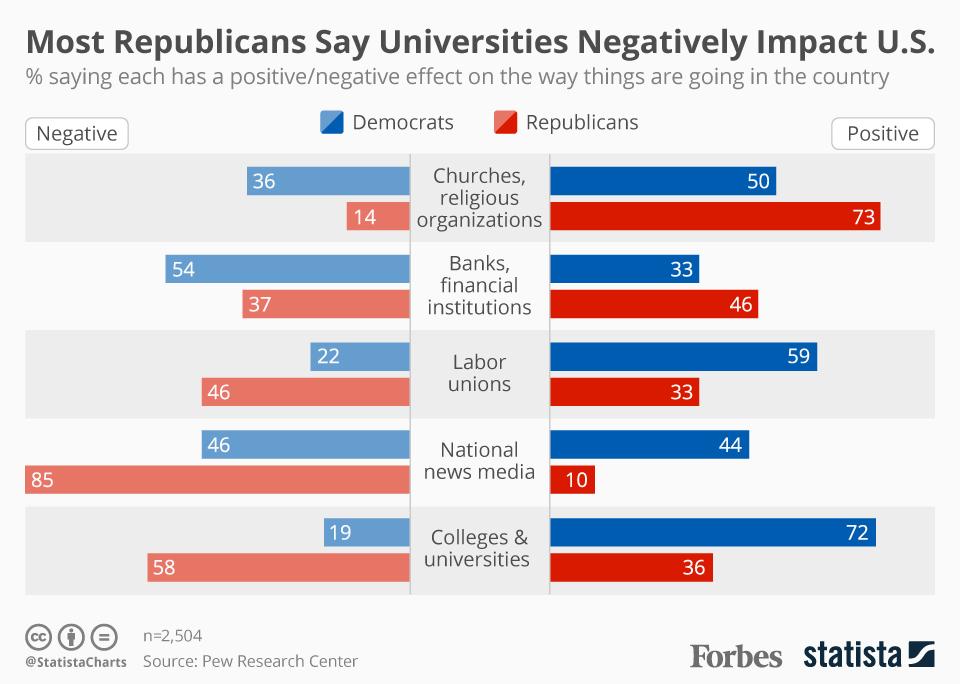 The academic in me thinks this would make an exercise for students learning about critical thinking.

MSM made much of a recent Pew poll that shows Republicans and Democrats vary widely in their views of various institutions including higher education. The graph on the right shows that nearly two-thirds of self-identified Republicans had negative views of colleges and universities. Left leaning news sources spun this poll data to show that Republican voters are knuckle dragging Troglodytes who revel in their ignorance and want to force that ignorance on everyone else. Right leaning news sources spun this same data to show that these same Republican voters are perspicacious judges of higher education who recognize that universities are hotbeds of political correctness run amok who block free speech, infantilize young people with “safe spaces,” and hire pinko faculty who indoctrinate the youth of America with wrong-headed values.

What this poll data ignores, and what the “interpretations” (which are filled with bias on both sides) miss is how people on both sides of the political divide feel about their colleges and universities. Another poll conducted by Public Policy Polling in North Carolina, one of the reddest of red states, found this:

The survey found that around 73 percent of all North Carolina voters expressed a team preference among the colleges and universities in the state. About a third support the University of North Carolina at Chapel Hill Tar Heels, with close to 20 percent supporting their archrival Duke Blue Devils, 16 percent supporting the Wolfpack of North Carolina State University and 5 percent cheering for Wake Forest’s Demon Deacons. It isn’t surprising that the vast majority of people in North Carolina would support the state’s major-conference athletics teams. What is surprising, given what the Pew poll would tell have us believe, is that support for each team transcends political divides.

PPP also asked people for whom they voted in the 2016 election. More Clinton voters than Trump voters professed an allegiance to college sports teams in the state; around 78 percent of surveyed Clinton voters and 66 percent of Trump voters support one of those four teams. Yet, of the remaining 34 percent of unaffiliated Trump voters, it is hard to imagine that at least some of them won’t be cheering for East Carolina University or Appalachian State University during football season. And regardless, two-thirds of Trump voters support at least one college or university in a state that has recently become known for a caustic political atmosphere.

It entails the examination of those structures or elements of thought implicit in all reasoning: purpose, problem, or question-at-issue; assumptions; concepts; empirical grounding; reasoning leading to conclusions; implications and consequences; objections from alternative viewpoints; and frame of reference. [emphasis mine]