How many dead people is too many? 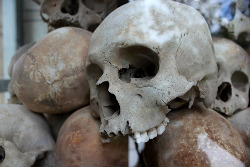 If we were talking about a policy that would kill thousands more Christians each year, it would be persecution

Apparently it is now uncivil and alarmist to point at the gorilla in the room and suggest that it needs to be sorted out.

If the numbers for death by insurance deprivation suggested by the CBO, Harvard, NIH, or some other reputable source are too high, on what basis do you think that? Is there evidence that the number of avoidably-dead Americans will be lower? Please share your sources for consideration.

Would a lower number even matter? “They” say thousands per year. What if it’s hundreds? Would that matter? Would the plan be okay if it only killed a few extra hundred people?

How about tens? What if the plan only kills maybe 45 extra people a year? Who cares, right? There’s bound to be a million righteous and noble reasons why even those 45 extra dead Americans just wouldn’t matter. What’s to be fussed about?

As for me, I’m callous enough that I’m just trying to see this as an exercise, never mind that for a real person dying of real cancer and in real pain, there’s nothing just an exercise about it. If that’s your mom or dad or brother or sister or kid or grandkid, or maybe even just the neighbor next door that you like, it might not seem like such a though experiment.

I’m stuck on the problem of the heap, that’s why I throw empathy out the window. Are there any other acceptable reasons to be so lacking in empathy?

Would 45 extra dead people just be acceptable losses? Okay. Who will step up and just say that? At least it would be honest. As Hillary might have asked, why would they even matter? It’s just Americans. If 45 extra dead are acceptable, how about 450? Have we crossed a line yet? 4500? 45,000? Half a million? 4 million? Does the number even matter?

How many people have to die for an idea before it becomes a bad idea? Or before they’re re-written as hapless, unwitting martyrs for whichever cause nonchalantly grinds them under its heel? Are we talking about noble sacrifice here? For all the concern the numbers get, one might think we’re just talking about roadkill, extraneous human debris reserved for footnotes in the data, merely the accidents of freedom, so many tons of post-carnival carnage. Worse, we’re told that counting the dead is alarmist. Considering their calamity just isn’t civil, you see.

Maybe, if we can’t find within the entirety of our union the national will to care for the weak who couldn’t endure the vicissitudes of lack and loss, maybe one day we can at least erect a monument to the Unknown Patient.

We the People
do here
memorialize
the righteous
Sacrifice
made by the
True, Hidden, and Unknown
Martyrs of Capitalism,
Who took their
Misery
to the Grave
for Life,
who persisted
in Suffering
for Liberty,
and who at last yielded
in Death
for Pursuit of Happiness.

That’s what it looks like from where I sit. If I’m wrong, by all means tell me what those dead people should look like. I don’t care about policy prescriptions and greater goods.

How should we reckon with our dead?