“The conscience of my elusive race gives not a fig for me, baby. But I endure, if you know what I mean.” – Richard Fariña 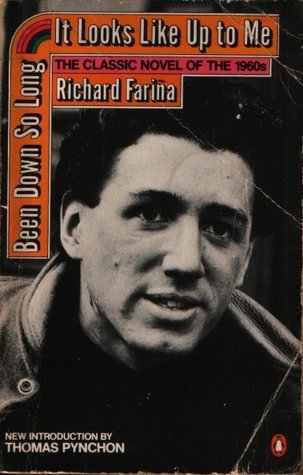 After reading David Hajdu’s excellent Positively 4th Street which chronicles the early careers of Bob Dylan, Joan Baez, and Richard and Mimi (Baez) Fariña, I decided to re-read Fariña’s first (and only) novel, Been Down So Long It Looks Like Up To Me. I hadn’t read (or thought much about) this book since I read in during my undergraduate days in the early 1970’s. My memory of that reading is a little hazy (the early 70’s, after all, were an extension of the 60’s with all the attendant excesses), but I remember being impressed with Fariña’s novel. It seemed to me to capture – well, anticipate, I guess would be a more accurate term for what I felt then and think now – the zeitgeist of that time.

There are other works that spoke to that zeitgeist, of course: Richard Brautigan’s Trout Fishing in America; Kurt Vonnegut’s Slaughterhouse-Five; Carlos Castenada’s The Teachings of Don Juan: a Yaqui Way of Knowledge; Herman Hesse’s Steppenwolf; Tom Wolfe’s The Electric Kool-Aid Acid Test; Fariña’s college roommate Thomas Pynchon’s The Crying of Lot 49  – all of these are works that  many Boomers remember as the stuff of conversations around the beer keg – or bong. But of all these counter culture touchstones of reading, Been Down So Long… holds a special place because it is a near perfect depiction of the ambivalence that plagues Boomers.

A lot has been made of the main character in Been Down…, Gnossos Pappadopoulis, and his similarity to the author. There is certainly truth in much if what is written about that, but to see the novel through that lens limits it as a document of its time. What makes this a useful and enduring work of literature is not that it gives us a portrait of Richard Fariña, interesting as he was. What makes Been Down So Long It Looks Like Up To Me a valuable and enduring work is that it’s the book that captures the conflicted history of the well maligned Boomers better than perhaps any other book of its time.

Gnossos’s adventures at Mentor (Cornell) sometimes reminds one of a druggy Holden Caulfield’s tear through New York. At other times, as in Gnosso’s romance with Kristin, the novel reminds one of a trippy Lucky Jim. That’s important, it seems to me, because Catcher in the Rye and Lucky Jim are books that spoke to the experience of life for a young person in the 1950’s. Gnossos’s rebellion against the buttoned-down repressiveness of campus life seems  in a real way of a piece with those works.

But the novel’s concerns with student protest, drug experimentation, and sexual, political, and cultural revolution are very much part and parcel of the 60’s experience. Gnossos, for all his willingness to experience this life, finds himself ambivalent at best, uncomfortable at worst, about being a leader in what Bowie mockingly termed “all that revolution stuff” in “All the Young Dudes.” That ambivalence/discomfort can come from lots of sources for Boomers: guilt about rejecting parents’ dreams for them, desire for conventional success, even desire for unconventional success (Fariña himself veered between careers as folk singer and writer). In the face of such conflicted feelings, the Boomer’s recourse? Be cool. Gnossos defaults to this position:

I am invisible…. And Exempt. Immunity has been granted to me, for I do not lose my cool.

To be on the scene, in the scene, and not be of the scene – that’s both Gnossos’s and the Boomer generation’s secret desire. Fariña gets that – and that gives Been Down So Long… a special place among classic literary works of the 1960’s.

We’re the generation who all protested the Vietnam War, who all marched for civil rights, who all tuned in, turned on, and dropped out, who all brought down Nixon. We Boomers are all a myth we fervently believe in.

And we were all at Woodstock.