A tale of newspapers’ financial collapse in three charts …

Three charts from the Bureau of Labor Statistics, two covering about 15 years, bluntly demonstrate the swift collapse of the centuries-old newspaper industry business model. They also herald the rise of an information-disbursing replacement — the internet.

A 2015 survey by the American Society of News Editors shows newsroom (not overall) employment in the nation’s 1,400 daily newspapers at just under 33,000 people. That’s down from a high of 56,000 newsroom employees in the early ’90s. Of course, those paying attention to newsroom cuts over the past two years have seen what newspaper managements, particularly at Gannett, have done to its remaining workforce. I estimate the daily newsroom workforce to be down to nearly 31,000.

The BLS data covers all employment in the newspaper industry, not just reporters and editors, and not just from dailies. The Editor & Publisher Yearbook lists more than 6,500 community weeklies, defined as any newspaper publishing at least once a week but no more than three times a week.

From the BLS report:

The second chart shows the rise and fall of selected information industries. The number of newspaper publishers has fallen from about 9,300 to about 7,500 in 15 years. Other information businesses have remained fairly static save for one — internet and web search portals.

As regular S&R readers know, I’ve taught journalism for the past 26 years. Persuading young women and men — and their tuition-paying parents — to consider a career in journalism is increasingly a difficult task. The chart below partly explains why.

In 2015, the annual pay in the internet and web search portal business averaged more than $197,000. Newspaper publishers averaged about $48,400. Feedback from students tells me entry-level pay for journalists runs about $23,000 to $27,000. That’s not an enticing salary range when student loan debt averages more than $30,000 per borrower. 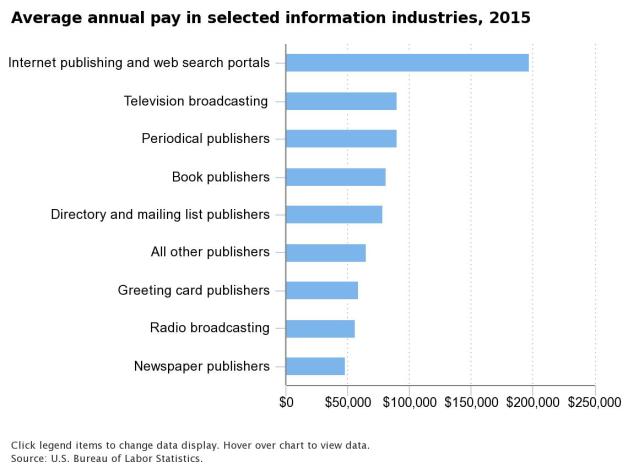 I have no startling revelation to make, nor do I have sufficient insight into redesigning the newspaper industry’s business model to make journalism a more financially rewarding career option for my students, let alone continue its role in holding government (and corporations) accountable for their actions.

I’m angry newspaper managements either refused to see this coming in the 1990s, or did and refused to adapt to the digital age earlier. If they had, perhaps civic discourse fueled by good journalism would be in far better shape than it is today.