Carole, Joni, and Carly: sometimes it’s hard to be a woman…

“A young woman in the spring and summer of 1967 was walking toward a door just as that door was springing open. A stage was set for her adulthood that was so accommodatingly extreme—so whimsical, sensual, and urgent—that behavior that in any other era would carry a penalty for the daring was shielded and encouraged.” – Sheila Weller, Girls Like Us 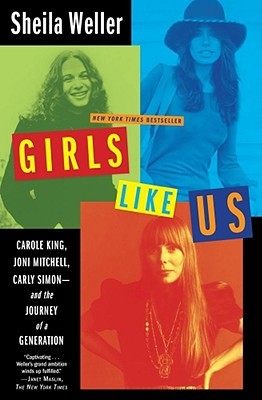 Girls Like Us by Sheila Weller (image courtesy Goodreads)

Sheila Weller’s triple-decker biography (and I use this word advisedly) Girls Like Us gives readers a look inside the lives of three of the singer-songwriter era’s biggest stars: Carole King, Joni Mitchell, and Carly Simon. Weller’s book is well-researched and the reader learns a great deal about each of these major figures. What becomes a question for the astute reader as he/she progresses through the book is whether what is being learned is always useful or meaningful.

This is not to say that Weller’s book isn’t compelling reading, especially for music buffs, fans of any of these particular music legends, or Boomers nostalgic for the era in which King, Mitchell, and Simon did their finest work. It is.

What may not work for some readers is the focus of Weller’s biographical studies. That may be because the work of these three songwriters are feminine (and feminist) concerns. One certainly cannot argue that three writers known for highly personal and confessional songwriting are treated unfairly by the author’s looking at their artistic careers through the lens of their personal lives. What might be giving me (and may perhaps give other readers) pause is the level of detail that Weller goes into in exploring King’s, Mitchell’s, and Simon’s private lives.

Perhaps the least known life among these three is that of Carole King. While a great deal has been written about King’s Brill Building work with ex-husband Gerry Goffin ( the list of songs includes “Will You Love Me Tomorrow?, “Take Good Care of My Baby,” “Up on the Roof,” “Chains,” and a raft of other classic pop hits). Certainly considerable attention has been paid to Tapestry, her magnum opus solo effort that defined the female singer/songwriter genre as James Taylor’s Sweet Baby James did the male genre. The work that came after Tapestry sold well but was always seen in the shadow of that effort. Weller does a good job of explaining why this happened and how King responded, bad marriage after bad marriage and effort after effort to escape being Carole King, creator of one of pop’s greatest albums, Tapestry. In a very real way Carole King suffered one of the great “sophomore slumps” in musical history. (The only case I can think of as a comparison may seem ridiculous, but her later career suffered in the same way that Steppenwolf’s did, with the exception that Steppenwolf never quite overcame the first song on their first album, by far their best – “Born to be Wild.”)

Carly Simon seems to be the artist closest to Weller’s heart, though by most objective measures she is the least important of this trio. There are a handful of absolutely great songs (“That’s the Way I’ve Always Heard it Should Be,” Anticipation,” and the feminist anthem “You’re so Vain”) but there is no sustained overarching achievement at the level of Tapestry. Nor did Simon reach the artistic heights Mitchell attained over a span of albums. Weller attributes this to Simon’s relationship with James Taylor which may or may not be completely fair to either Taylor or Simon and in fact does the latter a disservice of sorts in that it diminishes the feminist and artistic achievements Simon did attain.

That leaves Joni. She is the greatest of these three artists, a songwriter/poet whose work can arguably be posited as the feminine equivalent of the finest work by Bob Dylan. She is also the most complex of these three women, and she gives Weller some of the same kind of difficulty that Dylan has given biographers – she refused to contain herself, she refused to accede to others personally and professionally (even when that might have been the “right” thing to do). Weller gets this on an intellectual level, but part of what gives Girls Like Us its power is Weller’s ability to connect herself – and through that her readers – to these women. As a result, I think Weller’s treatment of Mitchell and her personal life has a level of meanness about it that her treatments of King and Simon do not. King and Simon Weller admires and connects with; Mitchell transcends Weller’s ability to connect “woman to woman,” and, as a result, she is sometimes facile, sometimes catty in her attempts to explain Mitchell’s artistic motivations in relation to her personal life – though, to her credit, she never tops trying. Her failure is an illustration of that old saw we all have learned the hard way – there are some people we simply do not and will not ever understand.

And that failure – her inability to “get” something essential in what makes Joni Mitchell Joni Mitchell – leads her down a wrong path. Going down that path is the problem I alluded to early in this essay: in digging into Joni Mitchell’s life searching for answers to where those remarkable songs come from (“California,” “Rainy Night House,” and “Chelsea Morning” to name but three in a long list) she tends to focus in on Joni Mitchell’s love life in an admiring but critical way. The same isn’t true with Carole King and Carly Simon. While, indeed, she focuses in on their love lives, too, she does so more as sympathetic friend – one who may disapprove of bad choices but who will always understand and offer comfort – than as a woman who sees another woman – a talented, beautiful woman she admires – as someone who might take away her beloved. That may seem a trivial thing, but I suspect that it is so only if the reader is, like me, male.

The central problem, then, it seems to me, of Girls Like Us – in many ways a very fine book about three important figures in pop music history – is this: Sheila Weller is excellent at writing about songwriters such as Carole King and Carly Simon who write great songs because of  their relationships with men. She hits a wall when she encounters a songwriter like Joni Mitchell who writes great songs in spite of her relationships with men.