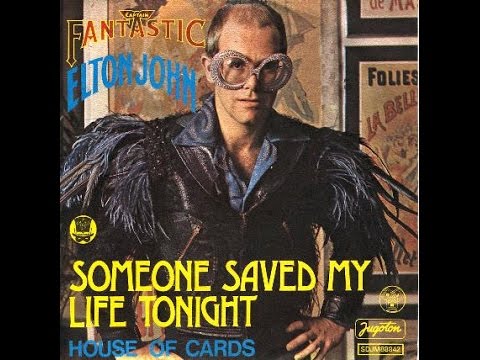 “Someone Saved My Life Tonight” is nearly seven minutes of suspension, of holding back for maximum effect only to deliver more tension and release. An absolutely masterful composition, arrangement, performance and production.

When the Adam Marsland Chaos Band did our Elton John shows we learned more than 70 of his songs, and I had a chance to really break down what was going on there. Some of those songs are compositionally, frankly, genius…Brian Wilson level. If you don’t believe me, work out “Goodbye Yellow Brick Road” sometime (if you can). Notice how effortlessly the tonal shifts cascade, minors on the verse subtly shift to majors on the chorus, and then out of nowhere, a crashing key change to Db. It’s an incredible composition.

So what’s his best ever song? I’m gonna go there. It’s “Someone Saved My Life Tonight.” This song, released in 1975 as a nearly 7-minute (!) single, is simply a masterpiece, an astounding recording, arrangement and composition – perfectly accessible yet endlessly complex (there is no home key), epic in scope but intimate in execution, drawn out (the drums don’t fully come in until 2:20!) and dramatic but never boring or overwrought.

It starts with simple piano figure and cymbals on the drums – but within 20 seconds it has imperceptibly settled into a B section. Nigel Olsson’s brushed cymbals on the quarter note create airiness and tension…the airy feel is accentuated by Elton’s high, fragile vocals, relatively far back in the mix. (Producer Gus Dudgeon deserves major props throughout for his use of mix perspective and reverb to create space here).

At 1:04 we get to the chorus, and the first entry of the exquisite three-part backing vocals of Elton’s band at the time (Nigel, Dee Murray and Davey Johnstone). And it’s the chorus I really want to talk about. It manages to spin on endlessly – only Barry Gibb could keep a chorus going this long without a resolution – the changes dancing in suspension around Bb without ever actually landing there, keeping the listener in suspense the whole time, drawn in on every word. Listen to how he keeps finding new ways to keep the chorus from resolving – it takes 40 seconds to finally land on “bye bye” – and then he’s immediately descending out of the key again. Fucking brilliant!

2:10 – Second verse. No new development and then…BAM! The drums land unexpectedly at the start of the B-section, along with more of those vocals. Whoa. 2:35. Elton says “damn it” – might as well be “fuck” coming from him – and then goes to double track for “listen to me good” and you hear a guy that doesn’t always resonate with the words he is singing – written by someone else – connect with the material, which has personal meaning to him. “Thank God my music’s still alive” – indeed. High stakes.

And now we’re in the second chorus. Nigel has deigned to move to the ride cymbal, but it’s more about what he doesn’t play, the endless space between each 2/4 on the snare or stately tom fill, Elton’s high strained voice carrying the drama, the backing vocals resolving into a Brian Wilson-like falsetto (Nigel?). Then we’re back into the intro. OK, is the song over now? Maybe, but…

WTF? Four minutes in here comes a bridge in yet another key, still understated except two bars in, a Leslie guitar emphasizing a discordant, jarring chord change. Then back to the slow, stately groove…”they’re coming in the morning with a truck to take me home…”

And back to the discordant Leslie. “Someone saved my life tonight…” “So save your strength and run the field you play alone….”

The backing vocals build, the changes perfectly cascade back into the last chorus….but Nigel hesitates a fraction of a second on the final fill before landing on the 1. Pow!

And in comes the ARP synthesizer – the sound of outer space, of infinity, as we go again through that endlessly suspended chorus, Olsson and Murray keeping things aloft – whoa, 5:17, that fill, that bass gliss…and then Elton goes for the high note at 5:30 – the chorus reaches its climax, but the band (with the ARP now leading the way sonically), just rides the changes down, no big statement, just trusting the song will take them there, saving up space ’til the fadeout…

And here it comes – finally back to the intro, except now it’s expanded infinitely, cascading harmonies in each channel, Elton’s high descending vocal leading the way. You’re there for every second of the fade, and then at the very end, at 6:37, Nigel Olsson delivers an epic tom fill. And then it’s gone.

There was never a distorted guitar, a speedy drum fill, or a move out of its stately beat. Nearly 7 minutes of suspension, of holding back for maximum effect only to deliver more tension and release. An absolutely masterful composition, arrangement, performance and production.

Ladies and gentlemen, a perfect record.

Adam Marsland is a highly regarded guitarist, keyboardist, bandleader and producer who has, in addition to leading his own solo and band projects (including Cockeyed Ghost, the Adam Marsland Chaos Band and Pacific Soul Limited) collaborated with the likes of The Negro Problem, members of the Beach Boys, The Wrecking Crew, Carnie and Wendy Wilson, The Wondermints, The Standells, Trotsky Icepick and Evie Sands. He lives in Los Angeles, where he owns and operates Karma Frog Studios.