If Congress decides to spend $1 trillion on infrastructure, keep tabs on who gets it

The grades are in. The nation’s infrastructure is close to failing. 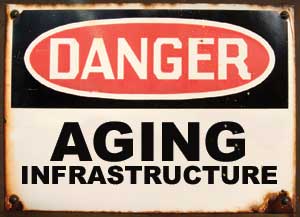 The 2017 report card of the American Society of Civil Engineers, posted today, gives the infrastructure on which America depends for commerce, defense, recreation, flight, food, water, waste — almost everything — an overall grade of D+.

From the ASCE report:

The 2017 grades range from a B for Rail to a D- for Transit, illustrating the clear impact of investment – or lack thereof – on the grades. Three categories – Parks, Solid Waste, and Transit – received a decline in grade this year, while seven – Hazardous Waste, Inland Waterways, Levees, Ports, Rail, Schools, and Wastewater – saw slight improvements. Six categories’ grades remain unchanged from 2013 – Aviation, Bridges, Dams, Drinking Water, Energy, and Roads.

The areas of infrastructure that improved benefited from vocal leadership, thoughtful policymaking, and investments that garnered results.

Scholars & Rogues has long considered addressing the nation’s infrastructure needs essential for the nation’s economic, cultural, resource, and domestic security (see here, here, here, and here). But it’s a topic that until recently has not received the attention its badly needed remediation demands. The ASCE report demands close inspection by citizens and politicians alike — followed by “thoughtful policymaking.”

Questions abound beyond defining the desperate need for action most Americans now recognize.

Who decides on what?

Aside from the nagging issue of how to find $1 trillion to spend, who will decide what specific parts of the infrastructure to fix using what decision process?

As Trump lays the groundwork for shepherding a $1 trillion infrastructure package through Congress, companies and industries are strategizing on how to get their priorities included in the legislation. The latest move comes from the American Chemistry Council, which commissioned a report from PricewaterhouseCoopers on how an infrastructure spending boost could fuel a chemical manufacturing “renaissance.” The report identifies shortcomings in the truck, marine and rail infrastructure the industry relies on. The council’s member companies include giants like Dow, DuPont, Honeywell, 3M, Merck and Monsanto. Cal Dooley of the American Chemistry Council, Mike Joyce of the American Trucking Associations and Mark Lustig of PriceWaterhouseCoopers were on the Hill on Wednesday with Reps. Garret Graves (R-La.) and Bruce Westerman (R-Ark.) to roll out the report. [boldface emphasis in original; italics added).

Yep — name an aspect of the nation’s infrastructure and there will be lobbyists looking for a share of the spending pie for their clients. Lobbyists, if not tracked closely, will heavily influence what’s done, where, and for how much.

Should private entities get public money?

Consider the purchase of public highways — especially toll roads — by private companies — even foreign companies. The Indiana Toll Road was in bankruptcy “eight years after inking a $3.8 billion, 75-year concession for the road with the administration of Governor Mitch Daniels.” As that toll road degrades, who is responsible for maintaining it? The Australian company that leased it? The state that gave it up? Or the feds through congressionally authorized infrastructure funding?

Many sectors of the American infrastructure are the product of public-private partnerships, perhaps with local and state tax breaks thrown in. If Congress deems those sectors essential for the nation’s security, how is financial responsibility apportioned?

How transparent will contract accounting be?

Repairing and renewing the nation’s infrastructure — with its enormous price tag — requires rigorous oversight on how that money is spent. The taxpayers should get their money’s worth without paying for fraud, corruption, or incompetence.

Such big projects — fixing a large dam, for example — require the expertise of large companies. Keep an eye on the nation’s top contractors if they’re selected to work with public money on infrastructure projects.

Here are a few lists (here and here) of America’s largest construction companies. You’ll recognize many of them. Money will eventually flow to them (and their subcontractors). If they’re hired, who will be the inspectors general charged with insuring good work for a fair price? (And who will appoint those IGs using what process?)

What are the chances of fraud?

In the case of infrastructure, money flows downstream. Congress first authorizes, generally every five years, a list of long-term projects. Then each sitting of Congress may (or may not) appropriate money for some or all of the authorized projects. For roads and bridges, for example, the federal Department of Transportation sends the appropriated money to state DoTs. Then, generally, the state DoTs tell their regional DoT sections to seek bids and award contracts.

Fraud is now news where I live in western New York state. Gov. Cuomo (who’d like to be president some day) drove allocation of a $1 billion fund to help revive the economy of Buffalo and environs. But U.S. Attorney Preet Bharara alleges a large contractor received a $750 million contract in return for bribes, disguised as consultant fees, to a lobbyist in a position to influence the contract award process.

If Congress allocates $1 trillion in one fell swoop, will there be sufficient construction and engineering firms for truly competitive bids? If all 56,000 bridges deemed structurally deficient by ASCE need repairing over a short term, will bridge repair firms collude? Will they divvy up the work among them or deliberately lose some bids to win others?

If Congress says “Go!” in the next four years, will President Donald and his Cabinet and beachhead cronies be part of this? Are taxpayers going to see the most epic fleecing of the State of all time?

Meanwhile, as you drive to work over a pothole-filled toll road, ask yourself a few questions:

How old is the bridge I drive over each day? Or worse, the one a school bus carrying my child drives over?

How clean is the water coming into my house? (Think Flint, Michigan.) How safe are the rails my Amtrak commuter train rides?

You’ll come up with a long list of infrastructure issues that affect you directly and personally.

So what do you do?

Step 1: Tell Congress to authorize projects and appropriate money for them.