Lost Highway: Peter Guralnick’s search for the roots of roots music – part 3, there are no losers in music…

Authenticity. Music. Freedom. Whether you’re Elvis Presley or Sleepy LaBeef, if you can have the courage to follow Sam Phillip’s advice, you can’t be a loser.

“You can be a nonconformist and not be a rebel. And you can be a rebel and not be an outcast. Believe in what you believe in, and don’t let anybody, I don’t care who it is, get you off that path.” – Sam Phillips 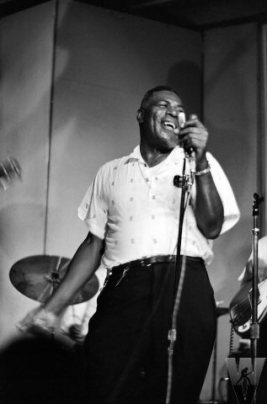 Initially I had planned for this last essay on Peter Guralnick’s excellent book on roots musicians, Lost Highway: Journeys and Arrivals of American Musicians, to focus on those musicians that he profiles who seem to have been their own worst enemies due to their dogged refusal to give up their dream of success. I mentioned Charlie Feathers, who, at the time of Guralnick’s profile of him, was in his 40’s and still playing small clubs and (to use a favorite term of Guralnick’s which has faded sooner that he expected) juke joints. Feathers’ insistence that he was still on (or at least near) the cusp of stardom if dark forces weren’t preventing his ascendance struck me as so sad, so indefensible, so lacking in self-awareness that I found him not simply sad and pathetic but off-putting. And I found Guralnick’s celebration of Sleepy LaBeef so over the top for a guy who had simply kept playing when those of his generation who didn’t make it had the good sense to quit was – well, see above description of my feelings for Charlie Feathers.

Then I got to the last section of Guralnick’s book, “The Blues Roll On.” And read Guralnick’s piece on Howlin’ Wolf.

Wolf’s real name was Chester Burnett. His size and strength and his blues delivery that called on that size and strength got him the nickname Howlin’ Wolf.  Here he is doing “How Many More Years,” introduced by a couple of figures far more familiar to far many more people than will ever know the Wolf:

The above clip is how I met Howlin’ Wolf. Back in the heady days of the mid-sixties, deep under the musical tsunami that was the British Invasion, the the Rolling Stones were able to convince the makers of  Shindig, a short lived but highly popular television show aimed at the burgeoning teen audience, to allow a 54 year-old Mississippi blues artist to perform.

His appearance on Shindig did not make Howlin’ Wolf a star.  The Wolf, however, was already a star to fans such as the Stones who had just covered “The Red Rooster” to great success (it was a #1 hit in England as “Little Red Rooster”). As most knowledgeable readers know, the great bluesmen were enormously influential on the generation of English musicians that produced The Rolling Stones, The Yardbirds, Cream, Fleetwood Mac, and Led Zeppelin (whose appropriation of great bluesmen’s songs for their own profit is one of the rock era’s shames). Even The Who (“Eyesight to the Blind” by Sonny Boy Williamson) and The Beatles (“Money” by Barrett Strong) were not immune to the power of Howlin’ Wolf and his colleagues.

Even with the attention paid to them in the 1960’s and 70’s by their superstar acolytes such as Eric Clapton, Bill Wyman, Keith Richards, and Steve Winwood, great bluesmen like Howlin’ Wolf made mere pittances of the riches enjoyed by their young admirers.  As Guralnick explains, Howlin’ Wolf, like any dedicated musician, no matter what genre, was not motivated by money; he was motivated by his art:

More than any other musician…Howlin’ Wolf was determined to present his own music in his own way. His blues continued to reflect the conditions from which they first had sprung – for Howlin’ Wolf there was little distinction between life and art…. He accepted the adulation of the Rolling Stones…and the response of a South Side Chicago audience with equal aplomb. He put every bit of himself into his performance, whether it took place in a jammed concert hall or there were only ten people in the room.

It’s easy, as I noted above, to dismiss Sleepy LaBeef’s or Charlie Feathers’ dogged persistence as delusional based on their continuing to play to small audiences and pursue their musical careers. But Howlin’ Wolf, a legendary figure in music history, tells us something different. An artist is someone who is fueled by the art itself, not its marketplace value. That’s an axiom that is difficult for those who are not artists (and for many of those who are) to grasp, even more difficult to accept (especially for artists).

Where does understanding of and belief in that axiom come from? For musical artists like Howlin’ Wolf, the words of another musical artist, one who has enjoyed every pinnacle of fame and fortune, would likely ring true:

Guralnick’s book ends with what he describes as the culmination of one of his most heartfelt dreams: an interview with the legendary Sam Phillips. Phillips, as any fan of popular music knows, was the owner and chief record producer at Sun Records of Memphis. Among the artists Sam Phillips recorded – or discovered and recorded – are the following:

This is a list of artists so staggeringly important (every one of whom is in at least one musical hall of fame, most of them in multiple HOF’s) that Phillips would be a legend for having discovered and recorded them.

Of course, any reader by now has noticed the one glaring omission, the artist Phillips is lauded for discovering and condemned for having let go:

It was with Elvis that the Sun era as we know it really began, and it was Elvis’s music, of course, that gained him entrée to the Sun studio in the first place…. There was never any question in his mind, Sam says, of Elvis’s gifts, but there was a good deal of question about his acceptance by the public….

As we all know, the public accepted Elvis pretty well – so well, in fact that when media giant RCA came calling, Sam Phillips listened – and sold Elvis’s contract for $40,000, a decision Phillips told an interviewer that he had never regretted because of the freedom the sale of Presley’s contact gave him:

With the money provided by the sale of Elvis’s contract, Phillips was free to concentrate on the careers of Carl Perkins, Johnny Cash, Jerry Lee Lewis, Charlie Rich and other lesser-known but equally luminous talents [note: both Charlie Feathers and Sleepy LaBeef recorded for Sun]. The effort paid off not only in sales but in the forging of a new style, the creation of a genuinely original, and lasting, body of music.

Eventually, of course, Sun Records’s moment passed. Phillips sold the label to Mercury Records in 1969. He died a wealthy man, but that money came from his ownership of a number of radio stations and his fortuitous early purchase of stock in a Memphis motel company called Holiday Inn, not from Sun Records. And Orbison, Lewis, Cash, and Presley all went on to the highest heights of musical success – with other record labels. Orbison went to Monument, Cash to Columbia, Lewis to Mercury (in his later career as a successful country artist) – and, the most fabulously successful of them all, Elvis, at RCA.

For God’s sake, don’t let’s become conformists – please. Just do your thing in your own way. Don’t ever let fame and fortune or recognition or anything interfere with what you feel is here – if you feel you are a creative individual…. I hope it’s not too long coming, because of the fact as we get longer and longer into the lack of individual expression, as we go along, if we get too far we going to get away from some of the real basic things…. We gonna be in jail and not even know it.

Authenticity. Music. Freedom. Whether you’re Elvis Presley or Sleepy LaBeef, if you can have the courage to follow Sam Phillip’s advice, you can’t be a loser. As Howlin’ Wolf might say, roll on….