Peter Guralnick’s search for the roots of roots music: the curse of being a critics’ darling

Guralnick’s Lost Highway runs smack through the heart of Nashville’s Music Row – as with corporate Pop, Country & Western has always been about sales and little else… 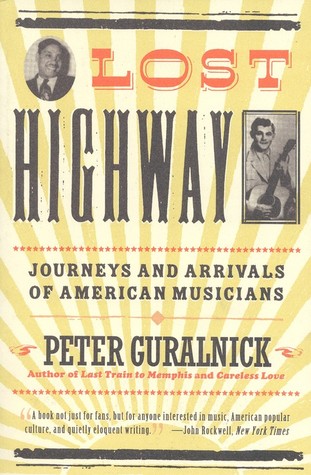 “‘Outlaw’ is the word that has been used, and abused, to describe…music that deviates from the Nashville norm. The principal way in which this music deviates, ironically enough, is that it is traditional music, which honors roots, black and white, which recognizes Jimmie Rodgers, Ernest Tubb, Hank Williams, and Lefty Frizzell – the pure lineage that runs in an unbroken line through country music.” – Peter Guralnick

This second essay about Peter Guralnick’s masterful collection of essays on roots music, Lost Highway: Journeys and Arrivals of American Musicians will focus on a second group of musicians: those who enjoyed little (or modest) popular success despite receiving highly positive reviews from music critics and the cognoscenti. These are the artists, and their stories pepper the histories of all art forms, known as critics’ darlings, a moniker that is more often more curse than compliment.

The received wisdom is that every artist is (or should be) pursuing his/her singular vision. In that way each artist’s unique vision can contribute to the growth of the particular art form and enrich the culture at large. Which artists become successful (critically and financially) is dependent on how their talents are accepted by both critics and the marketplace. The latter group, people who buy an artist’s work and support an artist’s career, is especially important in an art form such as popular music where commerce plays a bigger a role than critical appreciation.

Anyone who knows even a little about what Joni Mitchell called “the star maker machinery behind the popular song” knows that, as far as the art form called popular music is concerned this is horse hockey. They don’t call it “the music business” for nothing. When you’re a popular musician and sell records, all is well. If you don’t, you find yourself where these artists did….

James Talley, the first of Guralnick’s examples, was discovered and encouraged by no less a luminary than Pete Seeger. He brought a fascinating regionalism to his mix of country blues and folk music, taking from his experience growing up in the Southwest. He was signed first to Atlantic, then to Capitol where he did the bulk of his major label work. He was lionized by critics; Rolling Stone (and others) have lavishly praised his work. He played at the inaugural of President Jimmy Carter, who was a fan. But his major label records didn’t sell despite their critical acclaim, and he’s spent the last 40 years laboring in relative obscurity for one with such a considerable talent. Guralnick speaks admiringly of Talley’s dedication to his work, then allows Talley to speak for himself:

He remains committed to the goals he originally set for himself: to achieve something significant musically, to affect people in some meaningful way. He likes to speak of himself as a craftsman. “I don’t want people to think I’m a poet or politician. I want them to think I’m telling their story. I paint a picture on a human level. The whole purpose of of art, as I see it, is to move people off center, to make them feel something they’ve felt before or think about something they’ve never quite put into focus for themselves. My music is no different than any other art form. It’s a means of communication. It’s not political, it’s just life and looking at life and telling a story.”

Here’s a sample of Talley’s talent:

Stoney Edwards is an anomaly in the history of country music. Despite the successful career of Charley Pride, country music has not historically been friendly to black artists. While Edwards had a more successful major label career than James Talley, his career success was minuscule compared to Pride’s; Pride had 29 #1 country hits while Edwards had one song reach #20. That song, “She’s My Rock” had much more success recorded by white artists; Brenda Lee reached #6 with it a few years after Edwards and a decade later George Jones reached #2 with the song.

Part of the problem, too, is likely a difference in approach. Edwards wrote almost all his own material; Pride was, as were/are many country artists, a product of the Nashville system that employs songwriters and studio musicians in a factory process not unlike current pop. Not that Edwards’ musicians were inferior; his original backing band for his earliest recordings was a then unknown Asleep at the Wheel. The real difference between Charley Pride and Stoney Edwards might lie in their material. Pride’s catalogue consists of standard “country-politan” fare of the 1970’s such as his biggest hit, “Kiss an Angel Good Morning.” Edwards’ work, powerful and personal, contains gems like this critically admired and controversial exploration of race, “Blackbird (hold your head high”:

Critically admired, appreciated by a cognoscenti who saw the power and artistic truth in his work, Stoney Edwards, like James Talley found himself dropped by his major label (again, the culprit was Capitol) for – yep – inadequate sales figures. Through it all, his discovery, his work with Capitol Records, his dismissal, and his subsequent career decline, Edwards, a gentle soul by all accounts, remained modest and philosophical. As with Talley, Guralnick lets Edwards speak for himself:

What Guralnick wants to get at, I think, with the stories of James Talley and Stoney Edwards is one of those central truths that make all aspiring artists uneasy. You may have genuine talent, get the breaks you need (as in these cases major record label contracts), garner the admiration of critics and cognoscenti, but if the buying public doesn’t embrace you, you may, like Talley and Edwards, have to find solace in the quality of your work rather than validation in the magnitude of your acclaim.