Hensarling lies about the Consumer Financial Protection Bureau on NPR

Jeb Hensarling is resorting to “alternative facts” in his quest to drag the US back to the bad old days of “innovative” mortgages and unregulated financial companies that gave us the Great Recession. 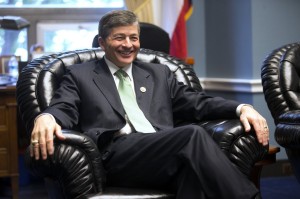 Last week I heard an interview on Morning Edition that had me fuming at my radio. Steve Inskeep interviewed Representative Jeb Hensarling (R-Texas) about Hensarling’s goal to eliminate the Consumer Financial Protection Bureau (CPFB). After listening to the interview, I had a question for Mr. Hensarling: are you a liar, or do you actually believe your own bullshit?

Hensarling, who has been pursuing the destruction of the CPFB as the chairman of the House Financial Services Committee, said

Somebody has to protect consumers, not just from Wall Street but protect them from Washington as well. And the Consumer Financial Protection Bureau has hurt consumers. Free checking at banks has been cut in half. Banking fees have gone up. Working people are finding it more difficult to get mortgages.

The bottom line is the best consumer protection are competitive, innovative markets that are transparent.

Yes, it’s true that some working people are having a hard time finding mortgages, but it’s not because mortgage markets aren’t transparent, competitive, or innovative. It’s because those working people are not making enough money to afford the house they want, or have poor credit histories. Free checking isn’t available as much any more because banks are no longer allowed to make up the costs of the free checking by charging exorbitant overdraft fees. In other words, the CPFB is doing exactly what it’s chartered to do – protect consumers from predatory banks and bankers.

The CPFB has also forced banks to write mortgages in plain, not legal, language. And to disclose how much you would need to spend to pay off your credit card debts. And to plainly say what their fees are. Sounds like transparency to me.

And let’s not forget – it was “innovative” mortgages and financial markets that led to the Great Recession in the first place. And Hensarling wants us to go back to those bad old days why? Maybe it has something to do with the fact that, over his career in the House, Hensarling has received more than 50% of his campaign funds from the financial services industry.

Let’s continue. Hensarling has said that the CPFB is “unconstitutional,” and Inskeep asked him about that. Hensarling’s response:

…It has no accountability to the Federal Reserve. Ask Janet Yellen, the chair. They create their own funding stream.

And yet, a little research turns up that the CPFB actually is accountable. To the Presidency. To Congress. To the Judiciary. They do create their own funding stream, like all financial regulatory agencies do, but their budget is capped according to the very legislation that brought the CPFB into existence.

It strikes me that Hensarling’s definition of “unacountable” must be very different from the one I found in the dictionary. Or he’s incompetent and unqualified to be the Chairman of the House Financial Services Committee. Or he’s lying.

Inskeep also asked Hensarling what would replace the CPFB in the event it was destroyed. Hensarling responded that other agencies would pick up the CPFB’s duties:

Well, number one, we have a Federal Trade Commission that is in charge of enforcing many of our consumer protection laws. We have bank supervisors at the Office of the Comptroller of Currency. They could do it. In addition, we could have consumer protection perhaps focused in one particular agency.

Hensarling is saying that other agencies could do what the CPFB is doing. That’s true, of course, but there’s a small problem with that – the CPFB was created specifically because seven different agencies that were all supposed to protect consumers to some greater or lesser extent – weren’t. Oh, and two of those agencies were the FTC and the Office of the Comptroller of the Currency. So, if the CPFB was needed because those seven agencies had all failed where the CPFB is succeeding, then devolving the CPFB’s responsibilities back to those agencies would be a good idea why?

The CPFB was created because those agencies had been subject to “regulatory capture,” which is when an agency is no longer able to effectively regulate their industry because the agency and industry have become too cozy. And again, Hensarling wants us to go back to the bad old days that got us into the Great Recession.

And one last quote from Hensarling:

No one person in America, particularly an unelected person, should have the power to choose our credit cards for us, to choose our mortgages for us. That is offensive, and that needs to end. It is not part of due process. It is not part of checks and balances. And the history of this agency is that they have hurt consumers because they’re hurting competitive markets and economic choice.

So it’s unAmerican to keep people from getting mortgages that they can’t afford, protect consumers from being gouged by bank fees, and aid consumers in understanding how it might be a bad idea to get a 5th or 10th credit card they can’t afford?

I guess the only thing that matters is economic choice and competition. And if consumers get screwed by banks, it’s the fault of the consumers, not the banks’. That’s Republican KoolAid.

It’s also bullshit. More than that, I consider it immoral. And if Hensarling can’t put his constituents’ needs ahead of the desires of banks and insurance companies, he should resign in favor of someone who will.