What is a liberal? Fairness is my core value

Liberals should talk about our values. And we should start with fairness. 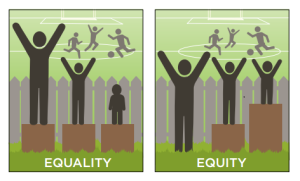 Equity is another word for fairness (image credit: King County)

Over the last few years, I’ve read liberals saying that we need to talk about our values more openly, to own them, to assert that they are just as much American values as conservative values are. But I’ve never been comfortable talking about my values. Partly that’s because I’m an introvert. Partly because sharing such important stuff about myself feels a bit like everyone’s nightmare of showing up to give a presentation and realizing you’re naked before the crowd. And partly it’s because some of my values have shifted over the years as I’ve matured and experienced more of life, and I’m sure that some of them will shift again in the future.

After a great deal of thought, I’ve finally realized what my core value is. The one value that matters more to me than any other. The one value against which all my other values are weighed, and from which most of my values spring. The one value with which I weigh the character of everyone I encounter.

Fairness is why I reject racism. It’s not fair to blacks that exercising their rights might get them beaten or killed by a police officer. It’s not fair to Latinos that speaking Spanish earns them angry shouts of “go home to Mexico.” It’s not fair to people of color that they are more likely than whites to be suspended or expelled from school for the same infractions as whites.

Fairness is why I support equal pay for equal work and reject sexism and misogyny. It’s not fair that a woman gets paid 70 cents on the dollar for doing the same work a man does. It’s not fair that women are treated by men as sex objects instead of people. It’s not fair when sexual assault is treated as a “man’s right.”

Fairness is why I support marriage equality. It’s not fair that my wife and I are allowed to marry, to enjoy the legal benefits that come with marriage (along with a few liabilities), and yet other people who love each other are not.

Fairness is why I support government anti-poverty programs like food stamps, Social Security, the free and reduced lunch program, student loans for college, and public housing assistance. It’s not fair that anyone should have to choose between feeding yourself or your family, or feeding your family and having a roof over your head.

Fairness is why I support progressive taxation and oppose cutting the capital gains and estate taxes. It’s not fair that those who are barely able to house, feed, and clothe themselves and their families should have to should shoulder a significant tax burden. Nor is it fair that the wealthiest among us who are most able to pay taxes are able to pay almost no taxes by turning all their income into “capital gains.” Nor is it fair that the children of the wealthy should be given a massive leg up over everyone else simply by inheriting great wealth. After all, the children of wealthy parents have already enjoyed great privileges simply by being lucky enough to have been born to wealthy parents.

Fairness is why I support the Affordable Care Act (aka Obamacare), Medicare, Medicaid, and the Children’s Health Insurance Program. It’s not fair to the poor that they can’t afford to visit the doctor when they’re sick. It’s not fair to everyone else that we have to pay the costs for the uninsured when they get so sick that they have to visit the ER. It’s not fair to women to ask them to cover the price of birth control, especially since this also affects poor and minority women more than middle-class and/or white women. And it wasn’t fair that medical bills often resulted in bankruptcy before the passage of the Affordable Care Act.

Fairness is why I support regulating firearms, but why I also oppose outright banning them. It’s not fair to the families of past victims of all varieties of gun violence, or to future victims, that guns should be so cheap, so available, and so unregulated. But it’s also not fair to hunters or to shopkeepers in bad neighborhoods or victims of stalking who fear for their safety to ban guns entirely.

Fairness is why I oppose “teaching the controversy” on evolution. As soon as a science class moves out of objective, verifiable facts (which evolution is) and into issues of theology, biology class becomes a comparative religion class where all creation myths must be explored to avoid running afoul of the First Amendment’s establishment clause.

I understand that life is not always fair. But that doesn’t mean we should give up on making it as fair as it can be. It’s also true that on some of the issues above I haven’t always measured up. But it’s when I realize that I’m not measuring up to my own core value of fairness that I am forced to take stock of my own weaknesses and limitations and to figure out ways to overcome them in order to become more fair.

Fairness is my core, and that’s why I’m a liberal.