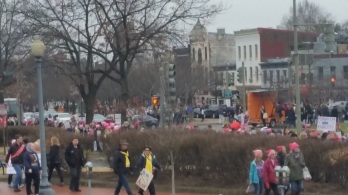 We took Uber from the Trinidad neighborhood near Gallaudet University as close as we could get to the Capitol. We were told to be on the lookout for St. Mark’s Episcopal Church, which was opening its doors for marchers who needed a bathroom, some refreshment, or to charge their phones. Our driver was from Baltimore–he’d brought a carload of women down to DC and then decided to work the city since he was already there. He dropped us off across the street from St. Mark’s. He wished us luck on the march and we wished him luck with fares.

By the time we got to St. Mark’s, we had been seeing converging crowds for nearly a mile. The pink pussy hats were a dead giveaway. You could easily tell the groups–they wore matching hats made from the same color yarn with the same stitch patterns. Some had the original folds at the top of the crown, as specified in one of the original knitting patterns. Others looked like a rectangle with square corners, still others had ears to make them more feline and less like genitalia. Some were just pink stocking caps. 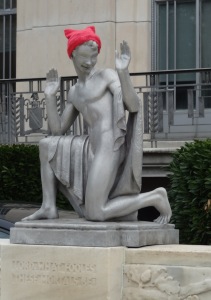 As we walked the few blocks to the US Capitol, the crowd swelled into a flood and it was obvious the hat was a badge of belonging–a handmade, fibrous handshake. We passed the Folger Shakespeare Library: Pan was wearing a hot pink pussy cap. Of course he was. Above his head on the building: “For Wisedomes sake, a word that all me love.” And beneath Pans’s feet, “Lord, what fools these mortals be!” The latter seemed more apropos of the current administration and the former seems like a lament we’ll return to often.

Around the corner two women were posing with a sign that riffed on Carole King. They were introducing themselves to each other as the photo was taken.

We stopped several times for photos with the Capitol in the background. I found myself wishing that the statue of Freedom at the top of the dome were wearing a pink cap, despite its impossibility. 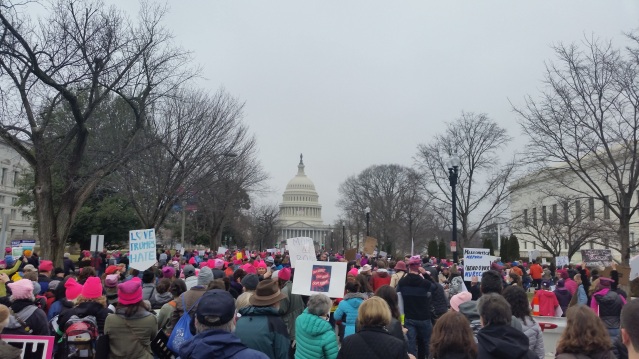 As we moved down Capitol Hill (yes, it’s really a hill), it became increasingly obvious that we would never be able to enter the official Rally site–the streets were filled to overflowing. As we got closer I thought it might be possible to go around the Museum of the American Indian and enter from a different direction. We passed a few police stationed along the way. Many women had heeded the warnings about purses and backpacks–only clear plastic, size limitations, no sticks to hold signs aloft–but it was now obvious that there was no checkpoint and there was no enforcement.

The March did not have permits for the Mall–but that’s where it ended up. There was no where else to go. The road around the Indian Museum was impassable, so we began to wander west down the Mall. The lawn was covered with giant plastic interlocking tiles leftover from the inauguration, an obvious attempt to keep the grass from being completely churned into mud. The imposing front staircases at all of the Smithsonian museums became bleachers for those lucky enough to grab a prime vantage point. 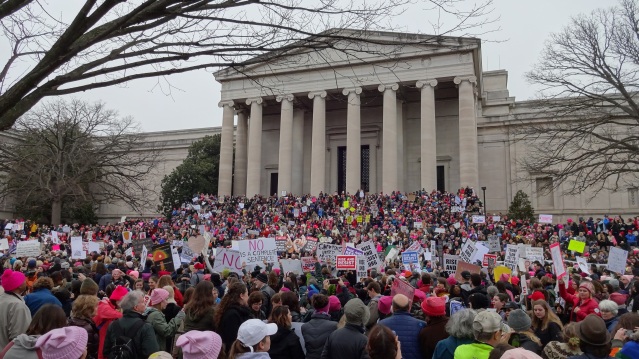 Some of the signs were heartbreaking. “I was sexually assaulted and I am not ashamed.” “Ask me why I had to have an abortion.”

Some of the signs were hysterically inappropriate, with the reminder that all the taboos on subjects and words have been shattered. Grumpy Cat, Princess Leia, Yogi Bear, and the Hunger Games all received their dues. 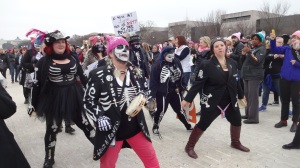 We passed two drum circles, one with dancers. There was a New Orleans-style second line, with all of the marchers dressed and made up as skeletons. and the marching band we fell in behind when we finally reached the official “March” route: all of the members were wearing brick-patterned jumpsuits reminiscent of The Wall to be built on the southern border.

I had received a text that said that the crowd was so big that a formal march past the White House would be impossible. It took another hour to go the few blocks up 14th street, turn left on to Constitution, and pour out on to the Ellipse, which was as close to the White House as we could get. There were numerous rows of extra barriers to keep crowds away from the regular wrought-iron fences. A man went past talking into a walkie-talkie, “They’re starting to clear everyone from the Ellipse.” We posed in front of the White House for another “We were there” picture and then headed north on 15th Street. 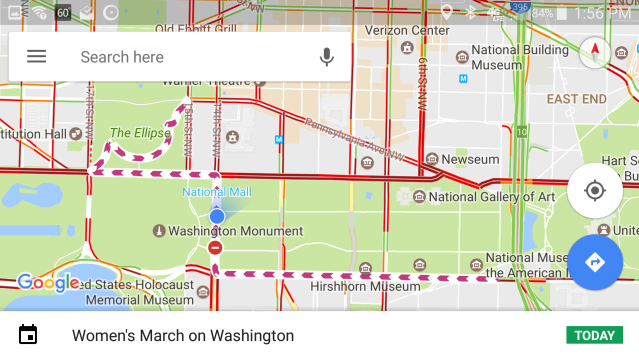 So far everything had been peaceful. As we neared F Street, between the W and Intercontinental hotels and an office building, we heard the sound of revving Harleys. Some of the marchers were detouring east on F, right into an apparent biker event. There was a flatbed trailer with a giant “TRUMP” sign on it visible above the crowd. “Do you want to go see what’s going on?” “NO. We are not going there.” So we continued on to H Street and turned east. 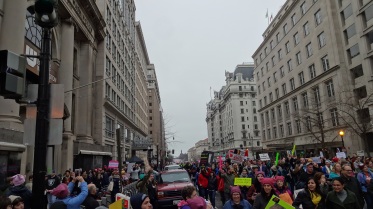 But here’s the thing–we were still surrounded by a crowd. Some of the streets were still closed because of the Inauguration. But some streets were just overwhelmed. As we passed through downtown, every street was awash in marchers, most sidewalks spilled over into the road. Block after block. In every direction. We went eight blocks to the edge of Chinatown before trying to stop for a seat, a beer and a bathroom. We only managed the last one. So we kept going for another 14 blocks, past Union Station and into the Near Northeast. After Union Station the crowd thinned out, but we were still in good company the whole way. Every restaurant and bar that we passed was filled with pink-hatted women and their companions.

I had read various warnings against talking to anyone with a camera who asked you why you were there–James O’Keefe (of the manipulated Planned Parenthood videos) was supposed to have been targeting the march. But on the way down Capitol Hill, I was approached by a couple of African American women with a camera, “Would you like to tell us why you’re here?”

I pulled over the youngest member of our group, who is 16, and the other members. Here is what I remember saying:

I’m here for her. She grew up from the time that she was eight until she was sixteen with a president and a family in the White House who set an example of integrity, caring, and dignity. Now that’s all gone. So it’s up to us–all of us–to set the example. To be the role models going forward.

There are more photos here. Enjoy. Organize. Resist. Be the example.