Dear Liberals: you don’t vote in your economic best interests, either 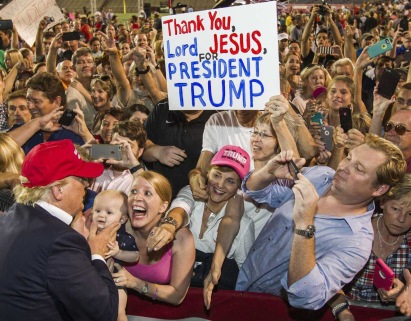 Bottom line: almost ALL Americans vote against their best interests.

For years progressives have been hammering conservatives – specifically social conservatives – who “vote against their own interests.” As in, poor working people who vote for the wealthy GOP interests that are the reason they’re poor, and whose policies insure they will remain that way. I have certainly been among this crowd – I remember wondering back in the 1992 election what the fuck could be wrong with Arkansas Bush I voters, for instance. They concluded that Dubya’s Daddy was the sort of guy “they’d like to have a beer with.” Somehow a Northeastern blueblood Skull & Boneser who’d been born with a silver spoon up his ass was more “one of them” than, you know, the guy who was actually born in the trailer park down the road.

It was irrational, it was self-defeating, and it was stupid beyond all imagining. If these people had any sense they’d vote for the candidates who were dedicated to improving their economic lot in life and providing real opportunity for them and their kids.

I make no apologies for thinking it and saying it over and over for years. It’s true and I was right. Thing is, though, the question isn’t quite that simple when you take it in the full context of American politics.

At its core, the “voting against their own interests” meme is very Marxist/materialist. It begins with the assumption that economic issues are primary, and everything else sort of flows off that base. While we liberals don’t use the term when ranting about the rubes, what we’re essentially saying is that these “values voter” types are at least in part captive to “false consciousness.” (I’m not a great Marxist and am playing a little loose with the nuances here, but this is close enough for the point I want to make.)

The problem with this frame is that it’s only half the truth. We liberals? Many of us, if not most, also vote in ways that are not in our best economic interests. This is a sinister argument in ways, but it’s true.

Say I’m job hunting. I want a leadership position that compensates me really well and affords as much financial security as possible. I need to prepare for my future, I need to provide for my family, but it’s a competitive market and I’m up against maybe hundreds of other applicants. It’s a tough row to hoe and a lot is at stake.

My best economic interests are obviously served by landing the best job. Which is a function of beating out all those other candidates. The more candidates there are and the better those candidates, the harder time I’m going to have. So fewer qualified candidates in the pool is a good thing for me.

How many of those qualified candidates I’m up against are women? Or black? Or Latino? Or Asian? Or some other ethnicity? Or disabled? Or gay? In a world where white guys get all the opportunities, where women are home with kids (or maybe working as nurses, secretaries or teachers), where blacks are relegated to the lowest tier jobs in the country, where Mexicans are still in Mexico and Asians are still in Asia, where all the best educational opportunities are reserved for white guys, I have less competition and a better chance at getting that job.

So when I vote for candidates who support equal opportunity for women and minorities – as I do in every election – when I blog about these issues, when I harangue others for voting in favor of racist demagogues, when I use what little cultural capital I have to encourage my friends and family and readers to do all they can to effect a “better America for all people,” am I not explicitly acting against my own best interests?

Of course I am. And the bottom line is that damned near everyone in the US (outside the stereotypical 1%er, whose primary value is the pursuit of wealth and power) is a values voter. The only difference is the value.

What about the idea that all those Trump voters were driven by economic anxiety instead of racism? As a good friend recently pointed out in one of our many arguments, they’re right that they have fewer opportunities than they once did. But when they look around to ascertain the reasons, they look past the real cause – the (primarily white) economic elite that’s been automating and offshoring their jobs for decades – and settle on the foreigners and the blacks, segments that have almost no demonstrable impact on the economic condition of poor and working whites in the South and Rust Belt. In other words, the “economic anxiety” argument is a charade. When push comes to shove, they blame the brown people even when it’s obvious that the culprits are wealthy corporations and white economic elites. In other words, racism.

My friend won that argument.

And don’t try to tell me about the value of diversity in the workplace. I read about the collective value of diverse teams all the time. I understand how having many perspectives can lead to better solutions and keener insights. But that’s macro. The minority on my team who generated that brilliant idea that helped us solve a problem? She now has the leg up on me for the big promotion, doesn’t she? This is in her best interests, but not mine.

Once you understand all this, the only thing that remains is to decide what values you want to stand on. For me, nothing is more important than the level playing field. While I don’t worry much about equality of outcome (we need a basic safety net, but not Diana Moon Glampers), I care passionately about equality of opportunity. Nothing is more important than fairness and justice. And yes, compassion. I told this story a few years ago about a lesson I never forgot, and maybe it bears repeating:

Let me tell you a story. I grew up in the very white Northeast corner of Davidson County, North Carolina. In my first grade class of about 25 there was precisely one minority, a black girl named Juatina. As fate would have it, she sat right behind me. Each morning we’d have a ten-minute break period where we’d all get chocolate milk and break out a little snack that our parents (in my case, grandparents) had packed for us. I always brought Fig Newtons, which I love to this day.

Except it wasn’t quite all of us. One morning I happened to look around and noticed that Juatina didn’t have anything. No milk, no cookies, nothing. I’d never really talked to her because she was, you know, one of them, but something in me instinctively felt bad for her. Here was this poor girl in the cheapest dress you could buy and she had to sit there every day and watch all the white kids with their snacks and chocolate milk.

So I gave her a couple of my cookies.

When I got home, I told Grandmother and Granddaddy about Juatina, and they apparently felt as badly for her as I did. So from that point on they packed twice as many Fig Newtons so I could share, and they also sent extra money along with me each week so the girl could have milk each day.

This – and you knew this was coming – made me a “nigger lover.” Which I didn’t like. But I guess it bothered me less than one of my classmates not having something for break.

I didn’t grow up on a level playing field, and I instinctively identify with people who fight the uphill battle, especially those who had to climb an even steeper hill than I did. (Being working class white in the South meant you didn’t know the people who mattered, but it wasn’t nearly as bad as being black or female, or, the gods deliver you, a black female. I have often wondered what became of Juatina. I have no idea how her life turned out, but I promise you one thing – if she made anything at all of herself, it was against obscenely long odds.)

Yes, I get the irony. The place I was born, the place that instilled the values that drive me, it’s also the place that’s been such a fertile breeding ground for the exact opposite set of values. Life is full of contradictions.

Hopefully it’s obvious that I’m not arguing in favor of denying opportunities to women and minorities. On the contrary. I’d just like to make sure that we all have as thorough an understanding of what we’re fighting and fighting for as possible.

Let’s all set aside the material/best interests theme, shall we? It’s a canard. Contemporary America is about nothing but a war of values. The more clearly we focus, then, the better the chances that our values will prevail.

So what are your values?