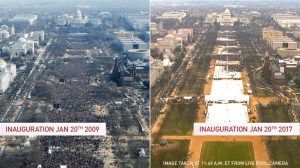 This is according to Politico, but its hardly the only source:

President Donald Trump and his team are still fuming over evidence of a relatively small crowd for his inauguration, with his chief of staff claiming the reports are an effort to “de-legitimize” Trump and another senior adviser explaining that the administration is offering “alternative facts.”

If you are so insecure that you need your press secretary lie about the crowd size, and if you’re so angry about the media attacking your press secretary that you need your spokeswoman to claim that those lies were “alternative facts” instead of the fantasy that they actually are, then maybe you have a bigger problem than worrying about media reports.

Maybe you’re de-legitimizing your own presidency.