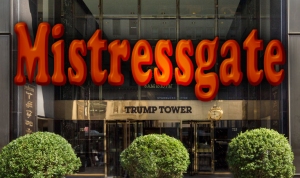 Kellyanne Conway, Donald Trump’s newly minted Counselor to the President, has been struggling recently to answer the sorts of double-standard personal questions from interviewers that frequently plague women. Now, granted, she brought some of that questioning on herself. But one of her latest answers opens a new, but not unexpected, can of worms for Team Donald.

Kellyanne appeared on the Trump-friendly “Mornings With Maria” on the Fox Business Network. Maria Bartiromo asked her if she would have enough time to do her job and still be a full-time mother. Kellyanne defended her decision by saying,

“I don’t play golf and I don’t have a mistress so, I have a lot of time that a lot of these other men don’t.”

At first, I was going to let this issue slide. Then Jason Miller, who was just appointed White House Communications Director on December 22, resigned on Christmas Eve, giving the traditional “there’s more to this story” reason: “I want to spend more time with my family.” A Trump advisor, A.J. Delgado, accused Miller of resigning from Team Donald because he’s “The 2016 version of John Edwards.” In other words, A.J. accused Miller of having a baby with his mistress.

And there it is: Mistressgate.

And so, Kellyanne, trusted counselor to Donald, I have a few follow-up questions for you. You may answer them in any order.

Normally I would not be terribly interested in such a prurient topic and would be much more outraged at the sexist questions posed to you by interviewers except for two things:

One: you sought to emphasize your role as mother publicly during interviews as a reason that you might not accept a role in the Trump administration and, indeed, you suggested that perhaps motherhood should be considered when considering a woman for employment in the White House:

“I do politely mention to them the question isn’t would you take the job, the male sitting across from me who’s going to take a big job in the White House. The question is would you want your wife to,” she continued. “Would you want the mother of children to? You really see their entire visage change. It’s like, ‘Oh, no, they wouldn’t want their wife to take that job.’”

You are the highest ranking woman in the incoming administration. Is motherhood a routine consideration in Trump White House employment? Because that would be, you know, illegal under employment law.

Two: Team Donald could not talk enough about Bill Clinton’s infidelity, even though he was not the official candidate against whom you were running. When asked in an interview about his own marital infidelity, Donald refused to answer questions and said, “It was never a problem” for him.

We know, because of Donald’s own words in his own books, interviews, and statements caught on tape that he has been unfaithful to at least two of his wives (and probably all three) and that he has had numerous extramarital affairs with married women. He was able to brush off, during the campaign, questions about his actions as “locker room” behavior.

Ask Bill Clinton. Clinton v. Jones ensures that Donald may be held accountable for his extra-presidential behavior. And lying about his behavior could lead to impeachment.

If he gets caught.

And that seems to be the issue doesn’t it? And for a woman who sees herself as continuing to be Donald’s “discreet advisor,” Kellyanne, you sure weren’t very discreet.