Perhaps it’s all just a cock and a bull. But it’s a great one.

“There is neither ghost of earl nor ghost of countess in that room; there is no ghost there at all, but worse, far worse, something palpable….” “The worst of all things that haunt poor mortal men…and that is, in all its nakedness – Fear!” – H. G. Wells 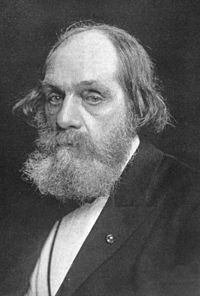 This, the penultimate volume in The World’s 100 Best Short Stories set, takes as its subject matter/theme ghosts. As has been the case with other volumes in this series, the editor has chosen to interpret his choice broadly. Certainly in every story the characters find themselves haunted in some way, but this comes in most of the tales as a result of actions or circumstances rather than from any supernatural force.

The list of authors in this volume represents the most canonical or near-canonical group of any of the volumes thus far. Besides the above quoted Wells, Alexander Pushkin, Washington Irving, Sir Walter Scott, Prosper Merrimee, and John Galsworthy are all represented. There are some now forgotten (by contemporary audiences, anyway) writers, too, such as Johan Bojer, Stacy Aumonier, and James Hopper.  Then there’s the pictured Edward Everett Hale, known to generations of American school children for his story “The Man Without a Country” which is part of this collection.

Hale is the most fascinating of this latter group because he is known for a single work. Like Richard E. Connell (whose “The Most Dangerous Game” was discussed on my essay on volume 1) or Frank R. Stockton (known for “The Lady or the Tiger?” who will be discussed in the next essay of this series (though for  a different story), Hale’s literary legacy, though he was critically well regarded in his lifetime, hangs on that single story. This the topic for another essay, however, so let’s move on to the works in this collection.

Hale’s story seems a fitting place to begin as it concerns a young US Army lieutenant, an artillery man named Philip Nolan, who is drawn into one of the despicable Aaron Burr’s plots to subvert American continental expansion by claiming a large chunk of the Louisiana Purchase for himself and his minions. Nolan and other low ranking members of the plot are brought to trial, a trial at which Nolan, to the shock of all in court, utters the exclamation that seals his doom:

His judge, a Revolutionary War veteran, grants his wish. Nolan is kept in exile aboard a series of US Navy vessels for the remainder of his life (about 50 years). The officers aboard each vessel are carefully tutored that Nolan is to receive no information about the United States for the rest of his life. Over the years he repents of his folly and even performs meritoriously in combat on behalf of his country on occasion. Despite pleas from captains for clemency because of his service, Nolan dies at sea, having spent almost his entire adult life as a living ghost haunting his captors and haunted by one moment of misguided youthful hubris.

A sort of mirror selection, Stacy Aumonier’s “A Source of Irritation” tells the story of an English farm hand who is kidnapped by a German on an aerial scouting mission in WWI. The farm hand, Sam Gates, becomes part of a German spy plot because he strongly resembles an important German spy. Sam, who is about to be murdered in an effort to mislead the British, is rescued by British soldiers during a skirmish and is able to tell his rescuers where the spy, whom they have been seeking, is hiding. He becomes a national hero. Through it all,  Gates behaves with an irascibility and modesty that confuses his kidnappers and charms his rescuers. It is a twist on the “man who knew too much and didn’t know he knew it” genre.

Johan Bojer’s “Kari Aasen in Heaven” and James Hopper’s “The Queer Scare” are both fantasies. In the former, the heroine, a Norwegian farm wife dies, visits heaven, and chooses to return to earth as an invisible spirit to look after her husband and two sons. In the latter, a couple with a small child who have moved from the city to a rural setting for peace and quiet deal with invaders from Mars who seek to use the child as one of their operatives. Both stories are pleasant diversions but little more.

Of the stories by the more famous authors, Sir Walter Scott’s “The Two Drovers” and Prosper Merrimee’s chilling “Mateo Falcone” are revenge tales. Both are excellent, but readers are likely to find “Mateo Falcone” the more compelling as it tells the tale of a Corsican, a people known for a strict code of honor among criminals (not unlike their neighbors the Sicilians), who kills his young son for betraying a criminal on the run from police. The exchange between Mateo and his wife Giuseppa after father has executed son is both a testament to a code of honor and an indictment of that code:

Without casting a glance on the body, Mateo returned to the house for a spade with which to bury his son. He had gone but a few steps when he met Giuseppa, who, alarmed by the shot, was hastening hither.

‘What have you done?’ cried she.

‘In the ravine. I am going to bury him. He died a Christian. I shall have a mass said for him.’

It is one of my favorite short stories both for its ability to shock no matter how often one reads it and for the matter of fact tone which Merrimee adopts in its narration.

John Galsworthy’s “Quality”  is another favorite story. It tells the tale of a boot maker named Gessler who, unable or unwilling to adapt to changes in the marketplace brought on by shoddy factory made footwear, slowly ends by starving himself to death to keep the quality of his hand made boots. At the end of the story, a neighboring shopkeeper reports his decline and death to the narrator, a gentleman of means who has tried to support Gessler, but, because of the quality of the boot maker’s work, has not needed to buy boots from him as often as he’d have liked:

‘…I know myself he was sittin’ over his boots day and night, to the very last. You see I used to watch him. Never gave ‘imself time to eat; never had a penny in the house. All went in rent and leather. How he lived so long I don’t know. He regular let his fire go out. He was a character. but he made good boots.’

That brings us to the three “authentic” ghost stories in this volume. Pushkin’s “The Queen of Spades” is a sort of “revenge from the grave” tale. I have written about it earlier, so I will refrain from repeating details. The H. G. Wells story is, as the quote that begins this essay suggests, about the nature of fear. A, to use a now trite term, ghostbuster, spends the night in a room in the castle of a long dead earl which is said to be haunted. Some strange doings ensue and finally the ghostbuster is overcome by his fear and passes out. When he awakens he is able to work through his experience rationally and realizes that his experience had to do with his own expectations of being haunted rather than with any real specter he may/may not have encountered. What Wells tries to get at is the psychology of fear and the power of the mind to trick itself.

And finally we reach Washington Irving and the first great American ghost story, “The Legend of Sleepy Hollow.” Those who know Irving’s work from either the Walt Disney cartoon (narrated by Bing Crosby!) or the Johnny Depp film (and there’s a TV show on that bastion of quality television, Fox) are surely aware that Hollywood’s revisionist treatments of literature likely bear only a passing resemblance to Irving’s story. Irving writes in such a leisurely style that he’s likely frustrating to many readers, but there are layers of both clever satire and interesting eeriness in Irving that are worth exploring and that his ambling prose allows one to savor.

Ichabod Crane is a self-deluded putz. Brom Bones is every jock asshole lording it over his high school. Katrina Van Tassel is an epitome of both unattainable beauty and calculating coquette. The least important character in the story is the Headless Horseman. “The Legend of Sleepy Hollow” is a tale about one of love’s eternal triangles: the struggle between brains and brawn to win the heart of beauty. Does the ghost get Ichabod? Does Brom Bones use the legend as cover for bullying Ichabod into leaving Sleepy Hollow? Or is it all, as Irving, an admirer of Sterne, smilingly suggests:

The old country wives, however, who are the best judges of these matters, maintain that Ichabod was spirited away by supernatural means; and it is a favorite story often told about the neighborhood round the winter evening fire.

Well, as Irving’s man Sterne would say, perhaps it’s all just “a cock and a bull.” But it’s a great one.