If our climate challenge is a world war, it’s one without an ending—or one where the ending won’t be clear for a century or two. 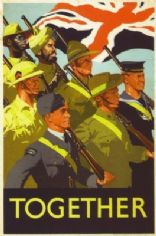 Bill McKibben, who, as Vox points out, is the closest thing the climate movement has as a spokesman these days, can usually be relied on for some stimulating discourse. While he did not invent the concept (that distinction goes to the fine folks over at Carbon Tracker), he was the prime mover behind popularizing the Stranded Carbon issue. This has led to a vocal, and surprisingly successful (compared to expectations), divestment from fossil fuel companies campaign. So his recent suggestion—exhortation, really—that we need to deal with Climate Change as a World War was guaranteed to generate some responses, and indeed it has.

McKibben is looking for something large here—a grand global effort to deal with the causes and impacts of Climate Change. He’s got a point, a very large one—Climate Change is still not being dealt with, either politically or economically, as the large planetary threat that it is. So he wants a “War on Climate Change.” And he generally seems to understand what this may mean in terms of societal implications. In particular, McKibben understands that a “war” on Climate Change would require a massive change in our industrial infrastructure. And it should. McKibben is particularly taken with the ramp-up of infrastructure required to win World War II, particularly in the US. You can see where he’s coming from, and he’s not wrong—there will be some substantial changes to the economy as a result of Climate Change, and some can be planned for, some won’t be—but they should be.

Something like this, for example—a useful little map of US electricity generation facilities located within four feet of high tide, put together by Climate Central in 2012:

This is exactly the sort of situation that requires some—indeed, a lot—of thought and planning. You would expect the people who run these plants to be mindful of all this, and at least they have some luxury of time. But this is just one example. There is a whole boatload of other infrastructure on coasts that will need to be dealt with in some manner—and in some cases this will require moving the infrastructure itself. Moving an airport is one thing—just find a plot of ground inland and build a new one. Moving a coastal railroad, such as much of the Amtrak trip from Boston to Washington DC, is something else. And this is just infrastructure—the global implications for agriculture, for example, are even more problematic.

McKibben is correct—there is a sense of urgency that is lacking in many Climate discussions. And he lays out a number of persuasive reasons why we should be thinking in these terms. David Roberts at Vox has a number of equally salient comments, both positive and negative. Others have been more critical of the concept than Roberts (and, as always, the comments range from occasionally useful to mostly terrifying). This should be a lively debate, which hopefully will accomplish what McKibben intends—a concentration of efforts at governmental and public policy levels to think about how to deal with this very large and increasingly problematic phenomenon, and to begin to mobilize resources to do just that.

And yet, and yet…. While conceding McKibben’s general argument about the need for urgency, is this the right metaphor? I take McKibben’s point—he wants a war-like mobilization of thinking and resources. But there is an aspect of War that McKibben (and others supportive of the metaphor) seems to be eliding, or at least I haven’t seen much discussion of this (but it’s early days.) Wars generally end. At least declared wars do. Parties negotiate terms—usually, but not always, a surrender of one side to another. And usually everyone who is left goes home. Sometimes peace breaks out, sometimes there’s an uneasy stasis that persist through inertia and fear. But there is a point (usually) when people stop fighting, and the war is over. And everyone devotes their efforts to rebuilding lives, communities, infrastructure, entire countries. Even metaphorical wars (the “War on Drugs,” or the “War on Poverty”) had a vaguely defined conceptual end point.

But that’s not what our children and grandchildren are facing here. If this is a war, it’s one without an ending—or one where the ending won’t be clear for a century or two, or even more, which is basically the same thing. The Anthropocene has now begun, and the Holocene, that benign and generous geological epoch which allowed humanity to flourish the past ten thousand years, is coming to an end. We don’t know what the future will look like, although we can all come up with various dystopian scenarios. I suppose we can say we’ve “won” the war if we really curb CO2 and other greenhouse gas generation to the extent global temperatures stabilize at 2 degrees Celsius above “pre-industrial levels,” as the Paris Climate Agreement targets. But that won’t end it, of course. Even if that goal is achieved, the planet will keep on changing. The changes on the ground have the potential to be pretty severe and, in some cases,  irreversible—those island nations facing disappearance aren’t coming back any time soon. And many of these haven’t even happened yet, or have barely begun. There may be a point in time when all of this will be “over,” but I have no idea what that point will look like, or when it may be, and that concerns me greatly, even though I’ll be long gone. There will be no Armistice Day in this war.

So I wish McKibben luck, I really do. There does need to be a major mobilization, perhaps one on the scale of the planet, to effectively neutralize, and perhaps even counter, the expected impacts of the carbon generated in the atmosphere to date, and to slow and reverse its growth during this century. As Roberts points out, there are clear political limitations to this approach at present, but these are perhaps not insurmountable. It’s just not clear to me that calling it a “war” will get McKibben where he wants to go. Not that “crusade” is any better, frankly.