Donald Trump is a fascist, Part One

Whether Donald Trump is a full-fledged fascist or “merely” a proto-fascist depends on which historian’s definition of fascism you prefer. Part one of a series. 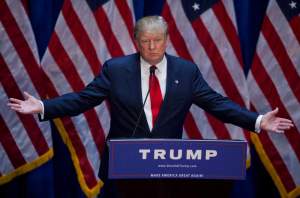 Donald Trump announces his candidacy for president during a rally at his Trump Tower on Fifth Avenue in Manhattan, New York, on Tuesday June 16, 2015.

In 1994, I took a class titled “The History of Fascism and Nazism.” It remains one of the most profound educational experiences of my life, and ever since then I have been extremely careful about referring to someone as a Nazi. In a 2010 post about my experiences in this class, I wrote

This class taught me that some things are just so bad, so legitimately evil, that making bullshit comparisons cheapens that evil. And I cannot stand by and let true, legitimate evil be cheapened. As a result, if I ever use the word “Nazi,” you know I mean it and I’m not joking.

And as my record here at S&R has shown, I have taken many people to task for misusing references to the Nazis (and, more recently, to fascism in general).

The class also taught me to be on the lookout for the rise of fascism in the United States, and impressed upon me an ethical responsibility to identify fascism if I ever saw it. I see fascism in the candidacy and person of Donald Trump.

Let me be perfectly clear, so there is no possibility of confusion about where I stand on this point: Donald Trump is a fascist.

This eight part essay explains how I have reached this conclusion, based first on what I learned from my “History of Fascism and Nazism” class in 1994, followed by an investigation of historians’ more recent expert opinions on what characteristics define fascism.

As I wrote in 2010, “The History of Fascism and Nazism” class taught me how to identify authentic Nazism.

Strip away the rhetoric and this is a condensed list of the characteristics of Nazism: authoritarianism, nationalism, racism, xenophobia, using violence for political gain, and ruthless efficiency. And the conditions that Nazism thrived in included high long-term unemployment and economic malaise, plus years of political indoctrination. As part of my research for this series, I re-read “The Nazi Seizure of Power (revised edition)” by William Sheridan Allen and based on my re-read, I’d add living in fear to the list of environmental factors as well. Generic fascism, however, doesn’t need one of these characteristics – the ruthless efficiency. After all, there’s no question that Mussolini’s Italy was Fascist (that’s where the word comes from, after all), but the Fascists were hardly the model of efficiency that the Nazis were. In fact, my instructor once said that all the things that the Fascists invented, the Nazis perfected and mechanized.

Looking at the environmental factors, it’s clear that the US in 2016 has all every one. While unemployment has dropped to about 5% recently, that’s largely because the long-term unemployed have been dropping out of the workforce. If, as this CNBC article says, 43% of unemployed people have stopped looking for work, that means the real unemployment rate is about 8.5%. By most measures, the US economy is still quite bad – unemployment, underemployment, the increasing number of able-bodied adults out of the workforce, the growing disparity of between the rich and poor, the shrinking middle class, companies sitting on cash reserves instead of investing them, historically slow wage growth, inflation below the Federal Reserve’s target, and so on.

In addition, politicians, the traditional media, and social media have been telling Americans to be terrified since at least 9/11. We’re supposed to be scared of lone wolf killers, terrorists, whites, blacks, Hispanics, the cops, gangs, drugs, child abductors, climate disruption, pollution, gays, transgendered people, vaccines, Zika, multi-drug resistant tuberculosis, teen pregnancies, homeless people, the ultra-rich, and on and on and on. And there’s little question that conservative media personalities like Rush Limbaugh, Bill O’Reilly, and Anne Coulter and fundamentalist Christian leaders have been indoctrinating a significant portion of the US public with a far-right ideology. Denial of the reality of industrial climate disruption, rejection of evolution, the willingness of the Tea Party to push the nation nearly to default on its debts, the refusal to even hold hearings on a Supreme Court vacancy, and the like demonstrate the success of this indoctrination.

So it’s obvious that the environmental factors identified in the “History of Fascism and Nazism” class are present. But what about Trump himself? Does he personally have the characteristics listed above?

The first question is whether or not Trump is an authoritarian. There was a serious question about this right up until his GOP convention speech. At that point, though, his authoritarian nature became obvious. He said “Nobody knows the [political] system better than me, which is why I alone can fix it. (emphasis added)” and “I am your voice.” If only Trump can fix the US, then he is by definition the only authority who matters. And his allegations that the election will be “rigged” against him are aimed at creating a situation where only he can win – any other outcome is by his definition illegitmate. Finally, there’s nothing inherently contradictory about being both an individualist and an authoritarian. Individualism is a personality trait, while authoritarianism is a means of creating and exerting power.

An example of American nationalistic imagry

Trump is clearly a nationalist. His campaign slogan, “Make America Great Again,” invokes pride in America’s history and is a call to place the US above other nations, presumably where it belongs. That call is explicitly nationalistic. He has criticized the UN for not being “a friend even to the United States of America,” and he’s threatened to abandon our allies to Russian aggression if they don’t pay for US protection. The Mexico border wall, spending even more on the US military, and bringing jobs back to the US from abroad are all calls to raise up the US even if it means pushing down other nations.

Trump is also a racist. He blames Mexicans for both taking US jobs and increased crime, and he wants to deport 11 million undocumented workers, even though the mass deportation of 11 million people might well qualify as a crime against humanity. He’s called for banning Muslims entrance into the US and has been open to making Muslims register in a national database and wear special religious IDs when in the US. He’s supported by several leaders of the KKK and white nationalist groups like the American Nazi Party that are themselves racist and anti-Semitic, and his occasional weak denunciations of those groups smack of ignorance or “nudge nudge wink wink” dishonesty.

As for Trump’s xenophobia, he rose to become the Republican candidate by blaming China for the US’ trade problems, Mexicans for sending rapists across the border, and Muslims for terrorism.

Trump is also a demagogue and a skilled propagandist. He won’t be able to bring jobs back to the US from overseas – those jobs are beyond the authority of an President – but that doesn’t stop him from saying he will. Trump claims to be a self-made man, but he was born to a wealthy family, started his first real estate company with a mere million dollars, and inherited a massive amount of money when his father died. He has convinced his supporters to blame the victim (undocumented workers) for stealing US jobs rather than blaming the employers who are actually responsible. And his supporters uncritically accept his exaggerations and lies while ignoring all facts to the contrary.

Finally, Trump himself has never explicitly called for violence. Instead, he makes offhand references to violence, implies violence is a good thing, and has given cover to violence committed by his supporters. For example, after the Democratic convention, Trump said that he wanted to “hit a number of those speakers so hard, their heads would spin.” He implied that violence committed by “Second Amendment people” might be able to stop Clinton from imposing restrictions on gun rights. And he offered to pay the legal bills of a supporter who was arrested for hitting an anti-Trump protester in the face. At this point Trump has not explicitly called for his supporters to attack his political opponents, but it’s not clear whether that’s because Trump doesn’t support violence, or whether he’s too smart to incite violence directly. Based on his language, though, the latter explanation is more likely. Unfortunately, even vaguely worded violent language (like his “Second Amendment people” threat) can provoke the unbalanced into committing actual acts of violence in what is known as “stochastic terrorism.”

So we have all the environmental factors that could lead to the rise of a fascist. In addition, Trump has five of the six characteristics of a fascist and is approaching the last one (violence for political ends) to some greater or lesser extent.

This makes Trump a fascist according to what I was taught in 1994.

Part Two – Fascism according to Stanley G. Payne – will be published this afternoon