Is there anything less scary than a terrorist? 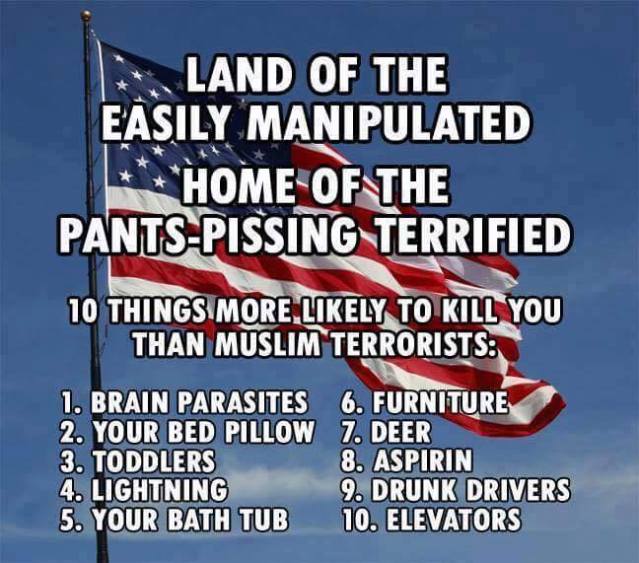 Let’s look at this.

First, what’s the risk of death by terrorism?

Consider, for instance, that since the attacks of Sept. 11, 2001, Americans have been no more likely to die at the hands of terrorists than being crushed to death by unstable televisions and furniture. Meanwhile, in the time it has taken you to read until this point, at least one American has died from a heart attack. Within the hour, a fellow citizen will have died from skin cancer. Roughly five minutes after that, a military veteran will commit suicide. And by the time you turn the lights off to sleep this evening, somewhere around 100 Americans will have died throughout the day in vehicular accidents – the equivalent of “a plane full of people crashing, killing everyone on board, every single day.” Daniel Kahneman, professor emeritus at Princeton University, has observed that “[e]ven in countries that have been targets of intensive terror campaigns, such as Israel, the weekly number of casualties almost never [comes] close to the number of traffic deaths.”

Washington Post: You’re more likely to be fatally crushed by furniture than killed by a terrorist

Oh. Well. That’s an embarrassing start. But what’s the number?

Since 9/11, a total of 238 American citizens have died from terrorist attacks, or an average of 29 per year.

The risk of Naegleria fowleri infection is very low. There have been 37 reported infections in the U.S. in the 10 years from 2006 to 2015, despite millions of recreational water exposures each year. By comparison, in the ten years from 2001 to 2010, there were more than 34,000 drowning deaths in the U.S.

On the other hand, per Mlive on CDC report:

Since 1962, 133 people in the U.S. have been infected with Naegleria fowleri, and only three have survived

Bed pillows? Really? Well, if we’re looking at choking/suffocation/asphyxia deaths, generally, we get this from Injury Information.com, even though we’ve no idea where they got their data. Seems legit.

Since 2000, the number of child suffocations per year has risen in the U.S. from less than 800 to more than 1,000 [emphasis added]. However, the number of suffocation-related injuries (which can include brain damage) has grown from approximately 18,000 to more than 20,000 annually. Even more children are treated annually in emergency rooms for choking-related injuries. Over the past five years, the amount of strangulation deaths among children ages 14 and under has risen as well. Eighty-eight percent of strangulation deaths occur with children under the age of four.The majority of children die of suffocation in their sleep, and 60 percent of infants suffocate due to pillows, while poorly maintained and old cribs account for more than 30 infant strangulation deaths each year. In regard to toys, choking makes up almost 50 percent of all toy-related deaths nationwide.

Much deadlier than brain-eating microbes, and a child-killer at that, and these killers are accelerating their attacks on our kids. And you know who loves pillow cases? The Klan!

Toddlers, though? You’ve gotta be shittin’ me.

Well, dammit. 21 of those murderous little bastards. Where’s a pillowcase when you need it?

Lightning? That’s gotta be like 1 person every never, right? Oh. 40? At the low end?

Furniture? Now I know you’re…what? 293? What the ever livin’…? And again with the kids. What do accidents have against kids, anyway?

Deer, now that I can believe. Vicious bastards. 130 seems kinda low, but still like, more than a 100 more than terrorists. Can’t wait till hunting season. It’s venison time in the name of our fallen! But wait, bees took out twice as many of us as terrorists. Dogs got us at least as often. Cows and horses combined kill nearly twice as many of us. Is there anything on this list less scary to a US citizen than a terrorist?

A black widow? I don’t care. Still scared of that more than a terrorist. At least Alice Cooper gave ’em a great song with a little help from Vincent Price. I don’t don’t care if them and rattlesnakes and sharks combined are less deadly. Just. No.

This is giving me a headache. What? Aspirin, too?

For 50-year-old men, taking a full-sized, 325 mg aspirin every day to prevent heart disease and stroke carries a risk of 10.4 deaths per 100,000 men per year over and above their overall death risk.Using Vioxx for arthritis pain carried a risk of 76 deaths per 100,000 people per year. Merck and Co withdrew Vioxx in September 2004 after it was shown to double the risk of heart attack and stroke.“The finding that taking Vioxx for a year is much more risky than a year of car travel, swimming or being a firefighter suggests that greater scrutiny of drug risks may be warranted,” the researchers wrote.

So just 300,000 men taking aspirin and, yup, gotcha. Next? Got anything for that headache that’s not on the list? Whisky?

Drunk drivers. Well, of course they are. But I’m not driving, so about that whisky?

In 2014, 9,967 people were killed in alcohol-impaired driving crashes, accounting for nearly one-third (31%) of all traffic-related deaths in the United States.

Finally, a solution to our troubles, right here. Elevators are about on par with terrorists by the numbers, but as a matter of frequency per elevator trips, they happen much less often, because terrorists are 29 per about 1 billion, so that, um, elevators are 18x less deadly.

So, ah, 45.9 million adults are really afraid of terrorists. And there’s about 900,000 elevators in the country. We can just assign 51 chickenhawks to each elevator to “defend US from nefarious actors” from the relative safety of their confines. As long as they don’t snort contraband pondwater while they’re in there, they should be okay.